Here’s a camera drone video that has been going viral over the past week: aerial photographer Adam Lancaster was flying his camera drone over Victoria, Australia, recently when a massive 2-meter wedge-tailed eagle decided to confront the intruder in midair. It was captured on camera flying right at the drone and using its talons to “punch the drone out of the sky.”

“This is the last thing a small bird sees when a Wedge-Tailed Eagle decides that you are dinner,” Lancaster writes. 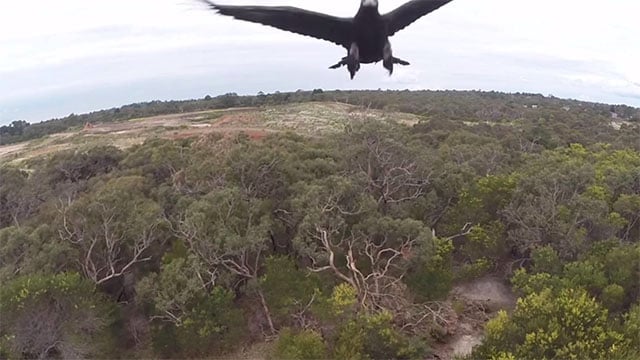 Lancaster says that both his drone and the eagle are fine, but he spent about $12 in parts to repair some damage from the attack and fall.

“Do not fly drones near birds of prey, they clearly attack seeing you as a threat or the right sized dinner,” he writes. “This will cost you money and potentially harm to the bird. This one was fine.. the drone needed some attention before it could fly again.”

Now get this: we were testing a DJI camera drone for a review earlier this month on Long Island when we had a nearly identical experience. A red-tailed hawk attacked the drone, knocking it out of the sky. We’re now waiting for a replacement part from DJI so that we can finish up our review.

Unfortunately for us, the camera wasn’t rolling, so we weren’t able to capture the attack on camera. The same thing happened to photographer Christopher Schmidt in Massachusetts late last year, and he was able to get it on camera.

“If you see a bird of prey while flying. Land,” Lancaster says. “I have added this to my operating procedure.”