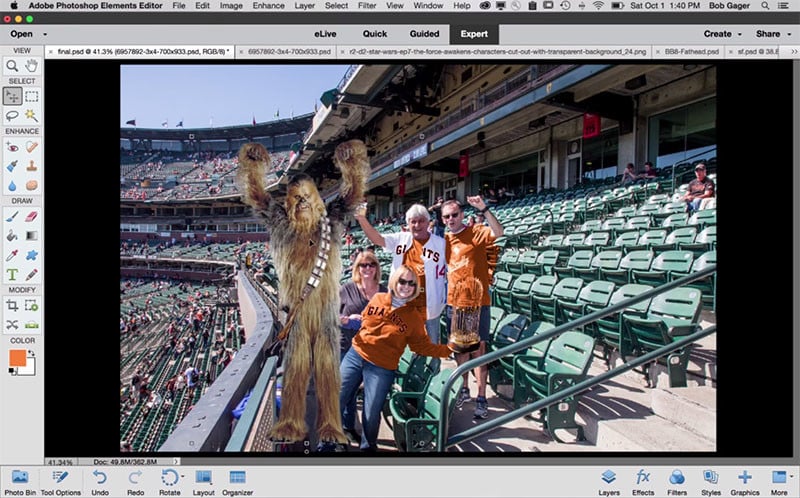 Over the past several months, Adobe has been promoting Photoshop at major sporting events with its “Adobe Photoshop Fan Cam,” which shows fans in attendance being Photoshopped on the big screen. Adobe recently invited PetaPixel to a game for a behind-the-scenes look at how the Fan Cam is done.

If you’ve never seen a Photoshop Fan Cam before, here’s one that was done at a Warriors game back in mid-2015:

The game we attended was between the SF Giants and LA Dodgers at AT&T Park in San Francisco on October 1th, 2016. It was a special themed game: Star Wars Day. 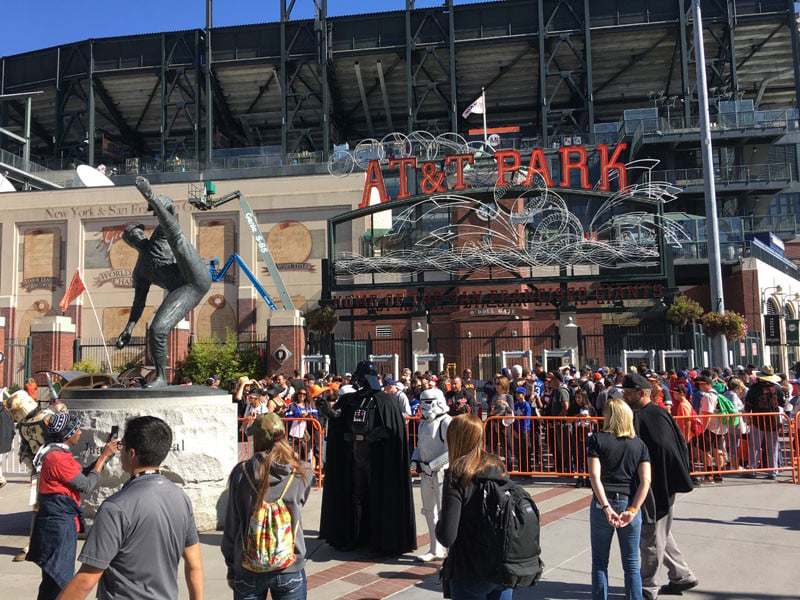 The start time of the game was 1 p.m., but Adobe’s Photoshop expert usually arrives an hour or two early for preparations. At 11 a.m., we met Adobe’s Bob Gager in front of the ballpark. He’s the Product Manager for Photoshop Elements. 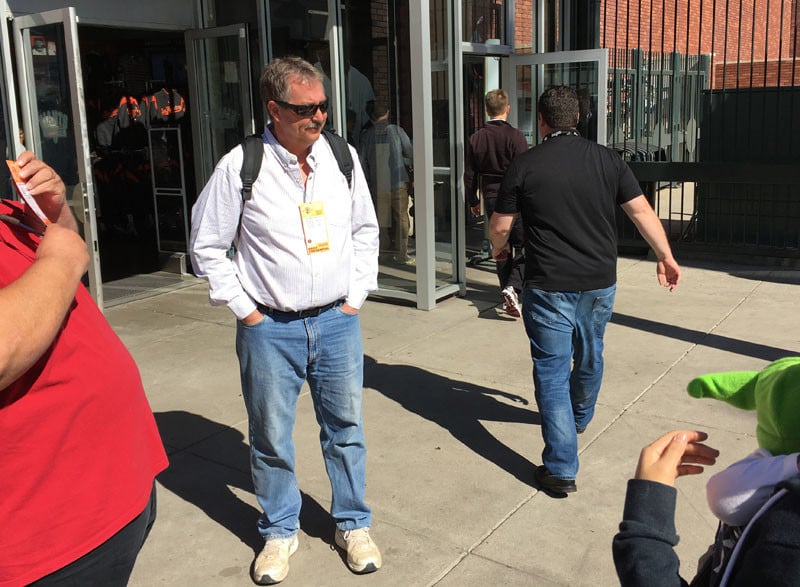 After going through the media’s security entrance, we met up with Mike Martin of the Giants. He’s the Senior Sponsorship Activation Coordinator. With our daily credentials around our neck, we were led into the park and up an elevator to a hallway with doors leading to the rooms used by the broadcasters and GMs. 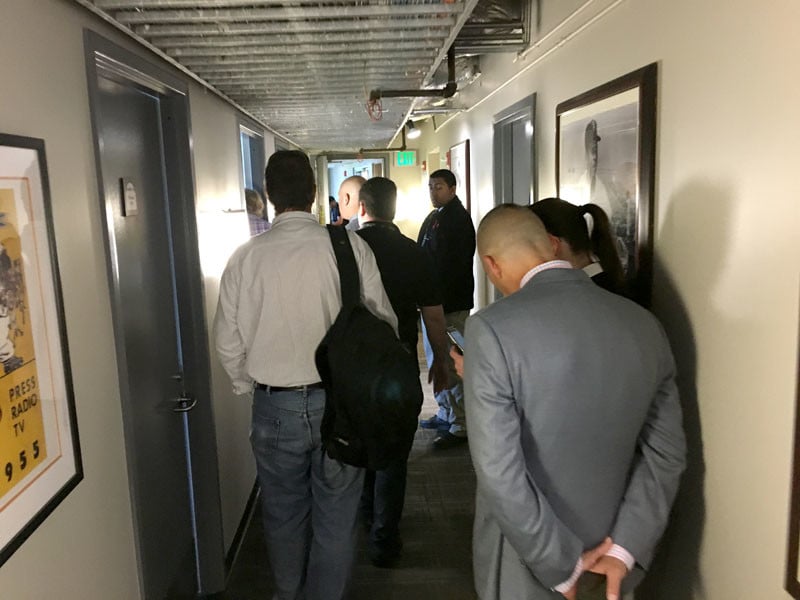 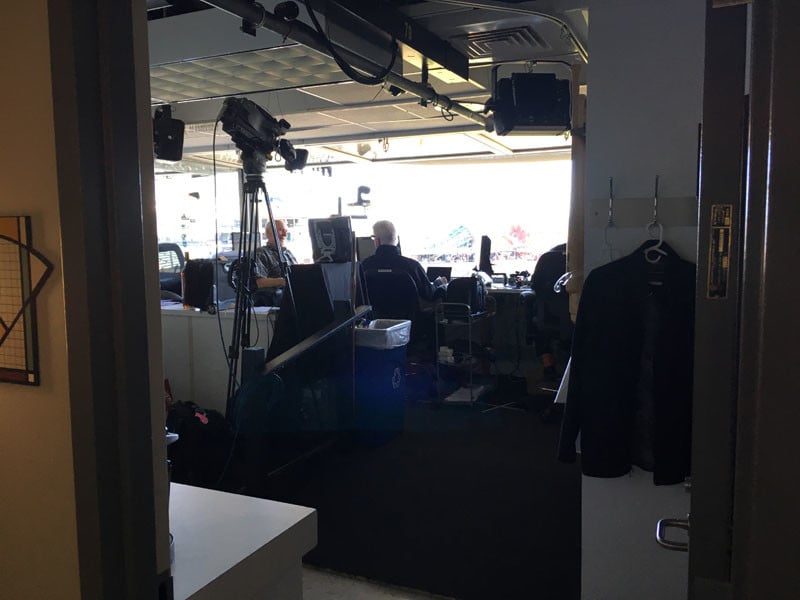 The area is also where all the park’s video feeds are directed. A little office at the end of the hallway is where Gager sets up his little workstation consisting of a Macbook and a wireless mouse. It was still over an hour before the first pitch, but some fans had already found their way to their seats. This is when the photos for the Fan Cam are taken.

With his DSLR in hand, Gager made his way out into the Club Level stands in search of the perfect subjects. 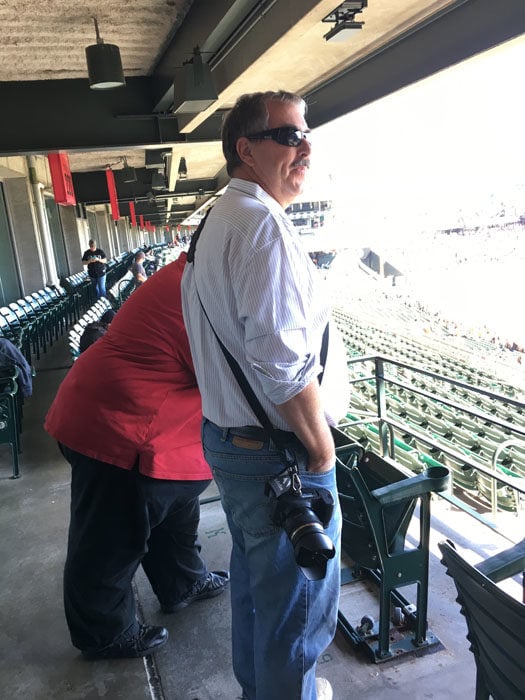 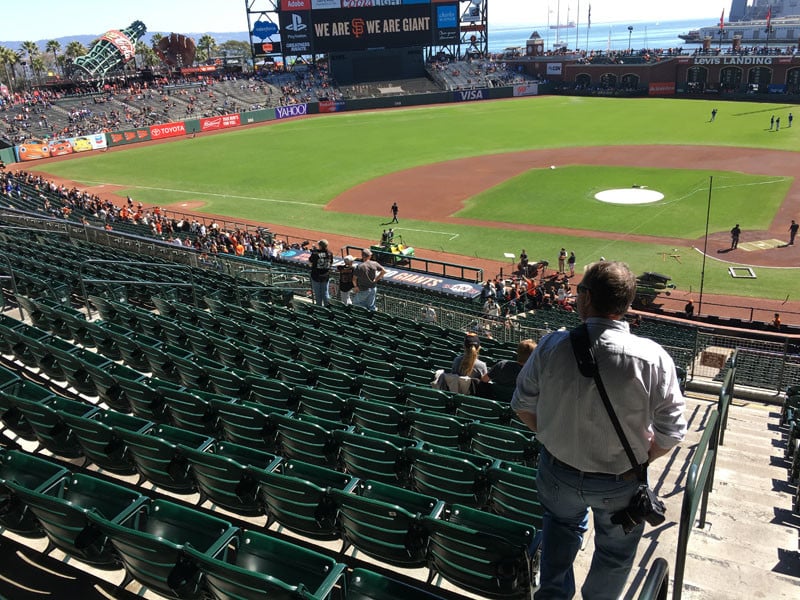 What Adobe looks for in fans can change from game to game. Generally one criteria is that the fans are enthusiastic and energetic, since a live shot of the fans’ reactions is shown alongside the editing video.

Often, the selected fans will be from the opposing team, since their hats and jerseys can be edited in Photoshop to show the home team’s colors and logos.

The location of the fans is also taken into account, since the live camera crew needs to be able to get near the fans’ seats during the Fan Cam.

After roaming about for a bit, Gager found one couple cheering for the Dodgers. He introduced themselves, asked if they were interested, and, after receiving the go-ahead, shot a set of portraits. 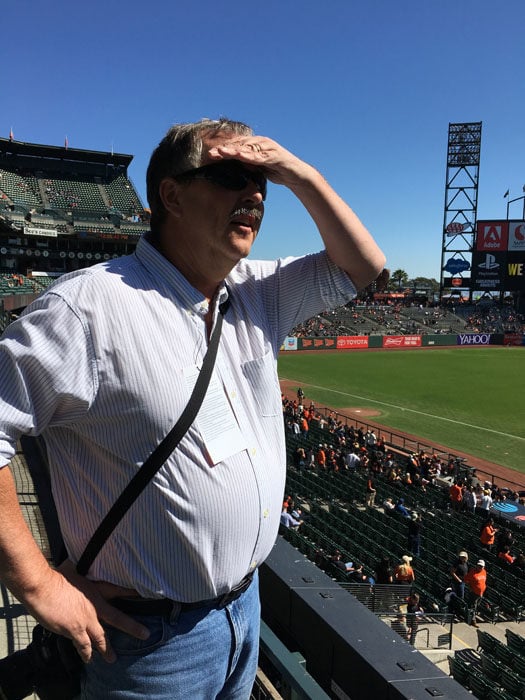 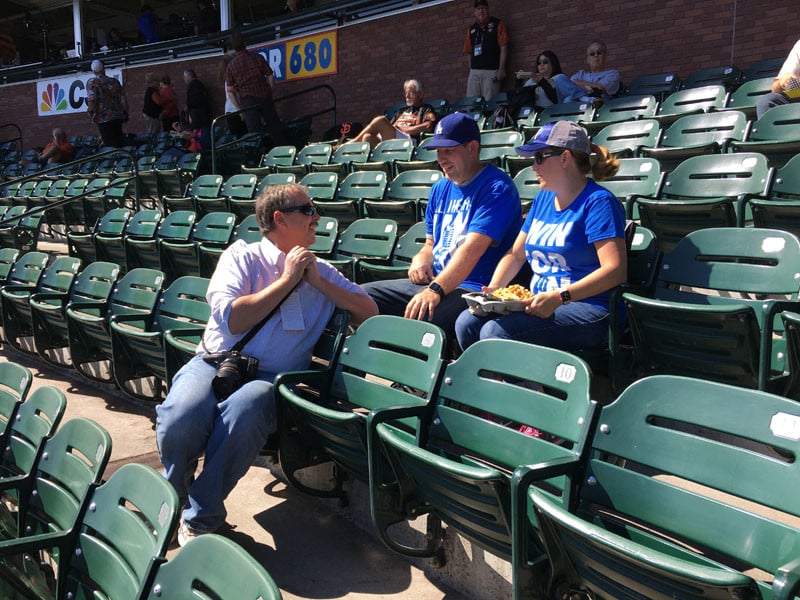 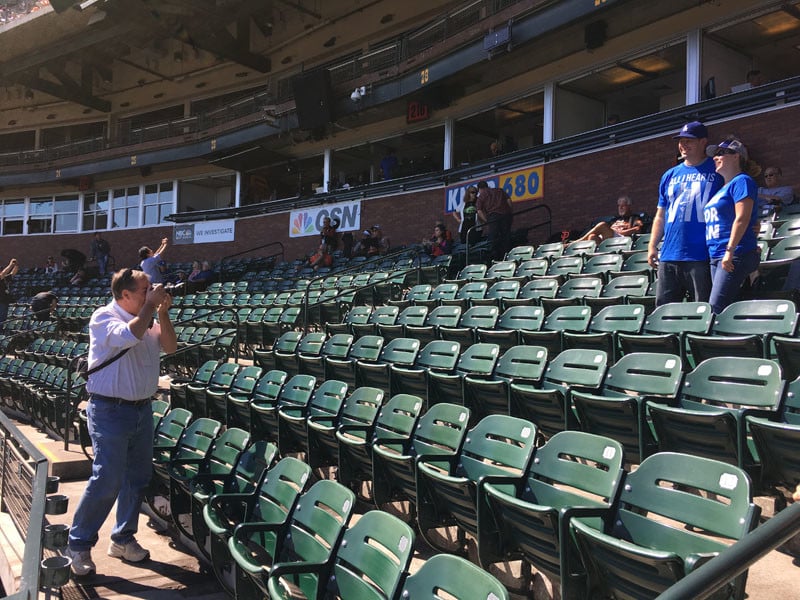 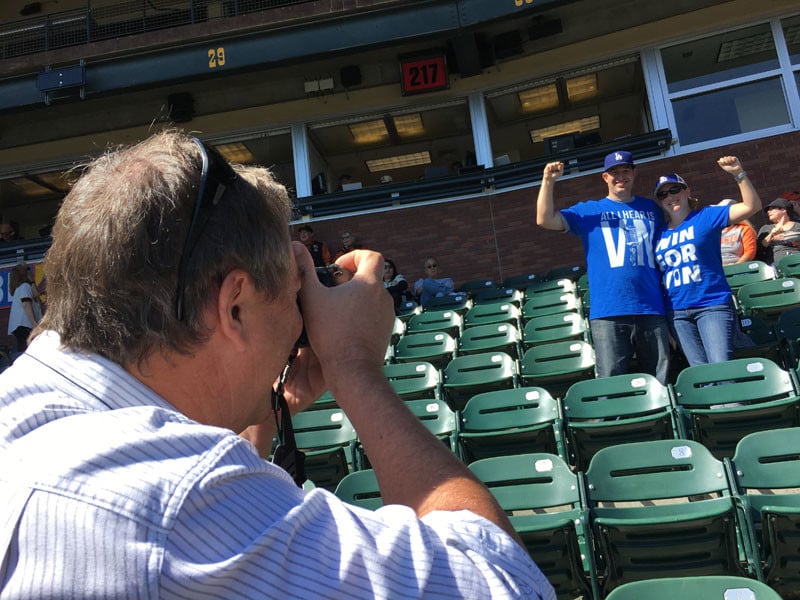 “I typically try and get two to three sets of fans and then decide which set to use later,” Gager says. After some more searching, he found another group of animated Dodger fans. 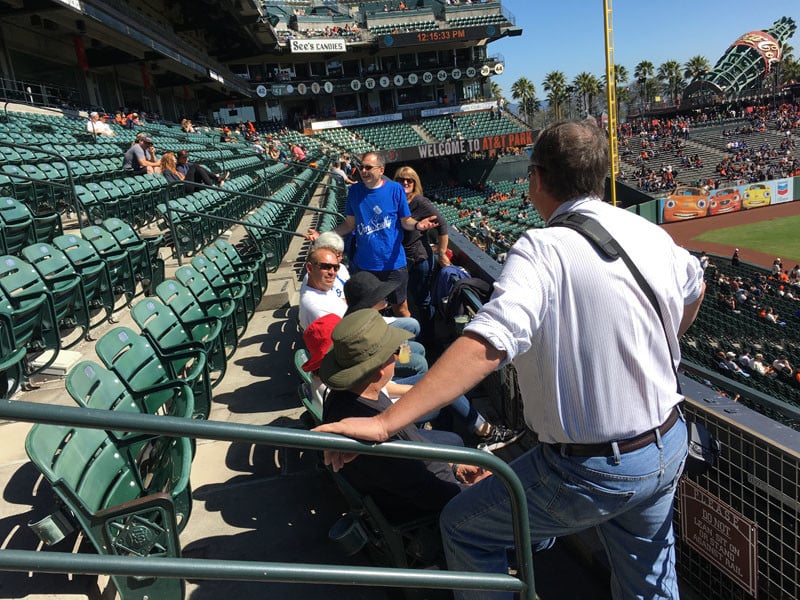 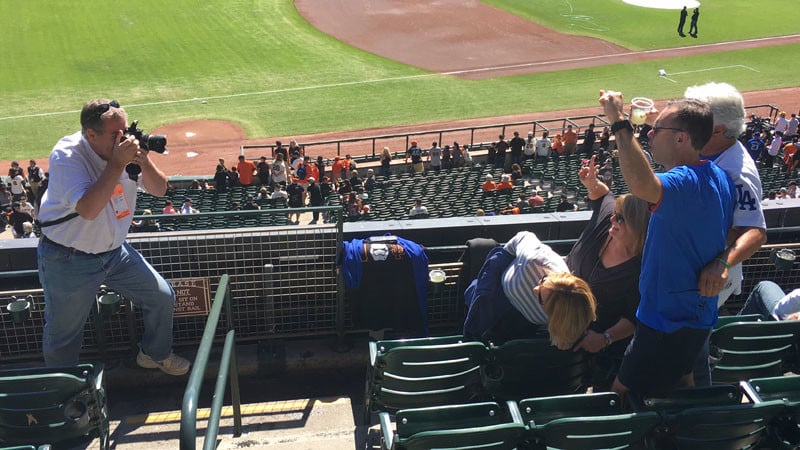 Once he had enough photos to choose from, Gager headed back to his workspace in the control room to transfer the files, select a photo, and settle in for the editing stage.

“Every now and then, I barely get the video handed over in time. It can get stressful if the game is going fast.” 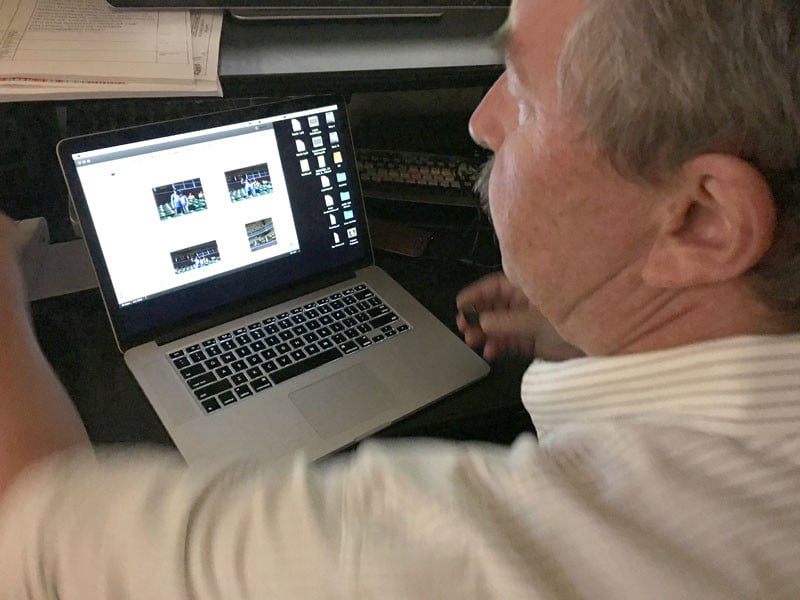 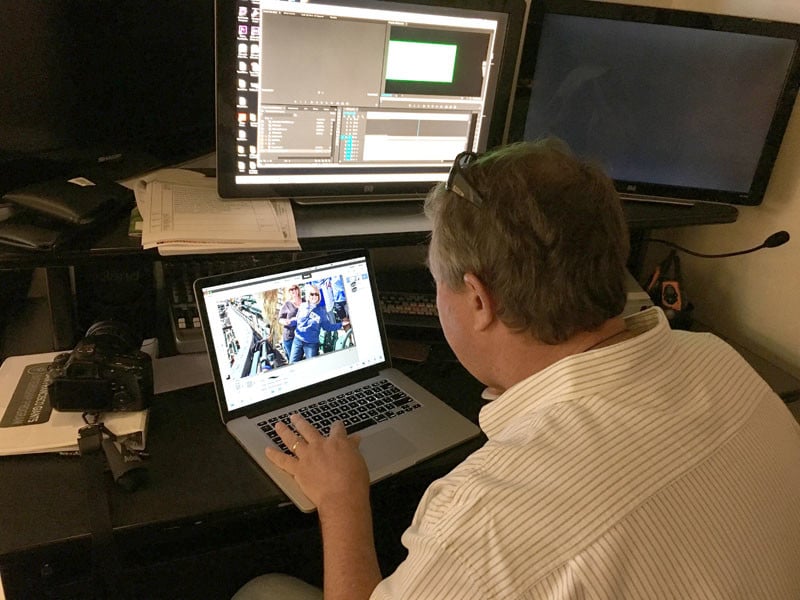 A lot of the initial editing time is simply experimenting and brainstorming what the final result will be. Just as painter Bob Ross used to create a reference painting first before his on-camera work for PBS, Gager works to do a complete edit before starting over and turning on his screen recording software. 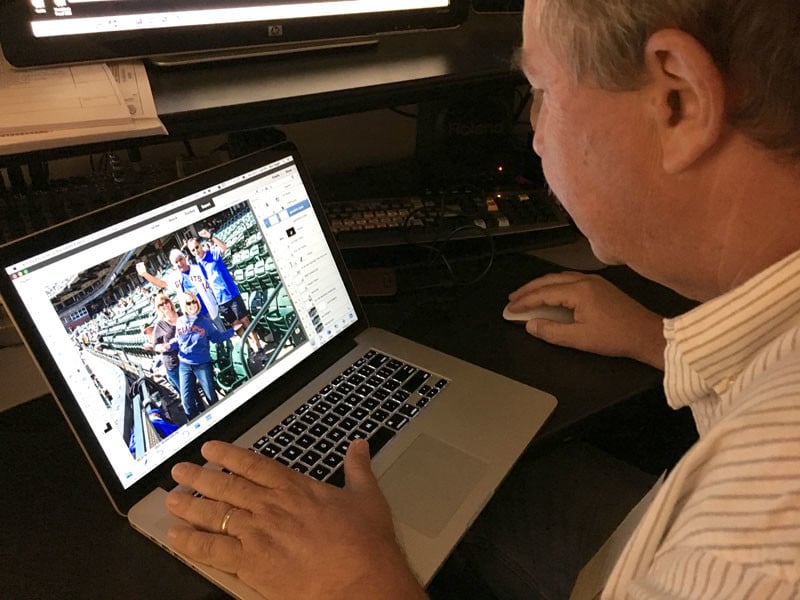 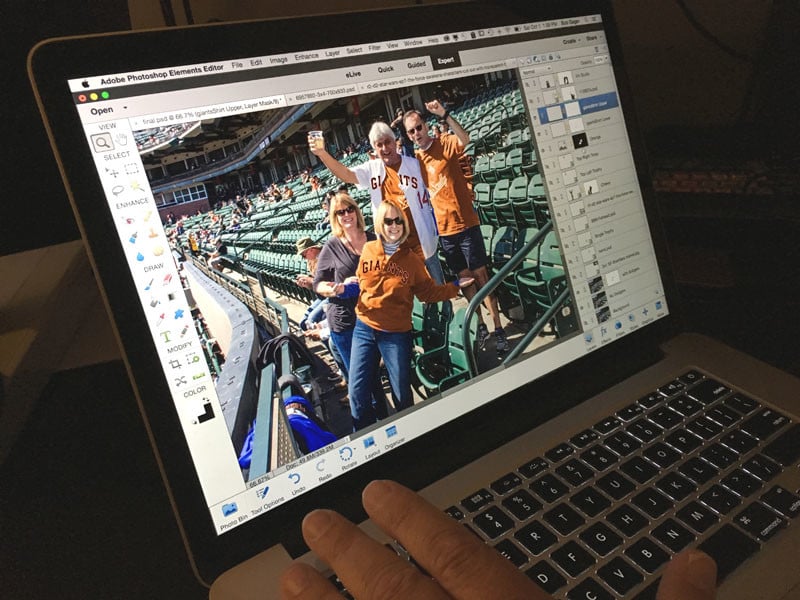 Gager then uses Premiere Elements to edit the video down to 1 minute in length. When the final 1-minute speed-edit video is done, it’s handed over to the Giants, who coordinate having it run (usually during the middle of the 5th inning) alongside a live shot of the fans. Here’s the final video delivered by Gager:

The game was the second to last game attended by legendary Dodgers broadcaster Vin Scully, so Gager included a photo of Scully in his creation. 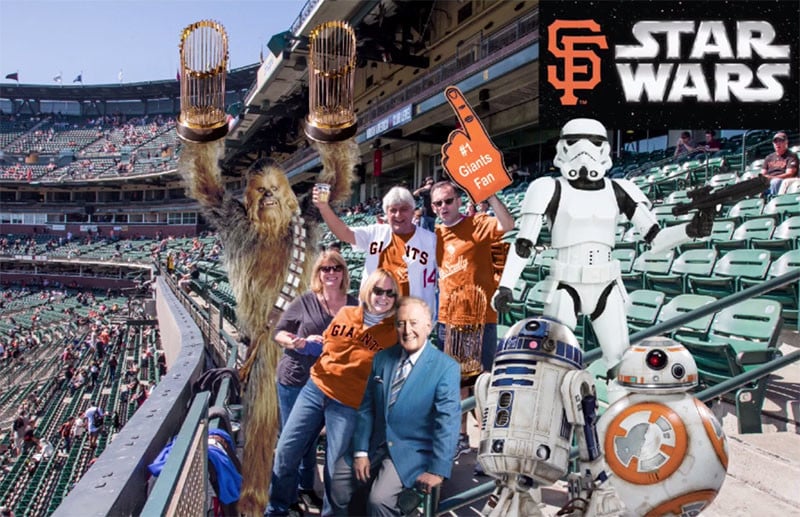 Adobe shot this video showing what the Photoshop Fan Cam looked like on the big screen in the ballpark:

Finally, here’s a 2-minute behind-the-scenes video that offers a glimpse into the process from beginning to end:

And that’s how Adobe works its Photoshop magic at big league sporting events.