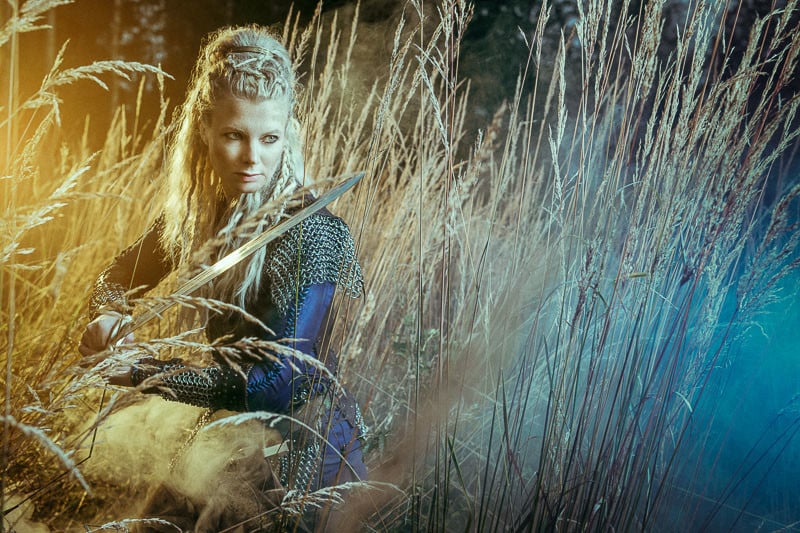 I recently completed a 6-month project in which I photographed my wife as a Viking shieldmaiden. Here’s a look at how the project was done.

It all started as a joke. When watching Vikings (History channel’s hit show on HBO Nordic) together with my wife, I pointed out several times that she seemed to share both the looks and a similar attitude with the character Lagertha — surprisingly similar considering that one is a scientist and mom from Finland and the other one a shieldmaiden from the 13th century.

We were binge-watching all the seasons, and by the end of season four Lagertha was a favorite Viking for both of us. My blessing and a curse is to see ideas for images everywhere, so it did not take long before the image of my wife as Lagertha began haunting me.

Around the same time I was trying to come up with an idea to use the money I had raised to celebrate her 40th birthday. Thinking about it, I figured that a day as a shieldmaiden should count as an original use of her birthday money. I already knew that I could get my hands on some major Viking-themed props since I have been working together with talented artisans like Jani Piirainen from Bard & Jester in earlier projects. 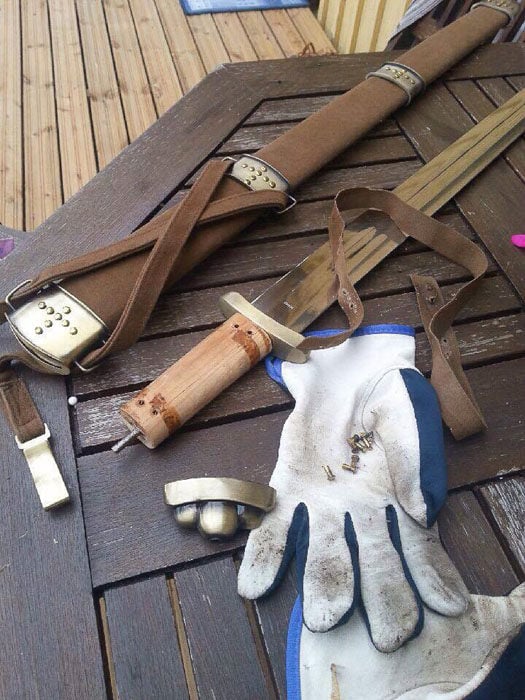 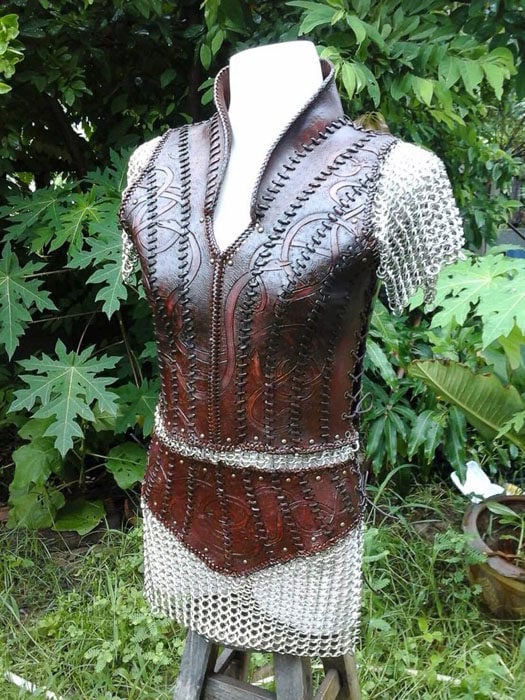 I found some killer plans for Viking armor and even got offered to use a cool Viking sword in the photoshoot! The only missing thing now was a shield, until I realized that I know a guy, Marko Paakkanen, who could make me one, and not just any old shield but a replica of Lagertha’s shield… At this point talking my wife into loving the idea was easy. 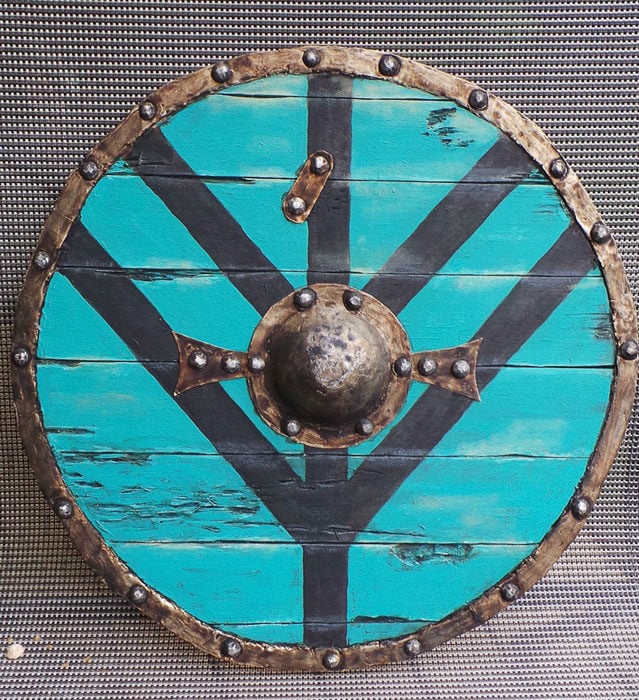 As crazy as it sounds, the final piece in the puzzle was a half blind horse. After telling my wife about the idea of a Vikings-themed photoshoot, she picked up on my thoughts and took it even further with suggesting to add a horse in the photoshoot. The thing is that around the same months when we were watching the episodes of Vikings, my wife was training a horse and liked her character so much that she ended up buying this retired race horse who had only one eye.

This particular horse not only has a mean Viking look due to the missing eye but it’s also trained to lay down when she asks her to — this is not something you run into every day. I rarely use the e-word, but at this point, I was already convinced that this will be an epic photoshoot.

Piece by piece we gathered up parts for the right look, convinced a make-up specialist Laura Puntila into the project to help to create the shieldmaiden look, and my wife continued training the horse to be comfortable with the flashes and other distractions on the set. 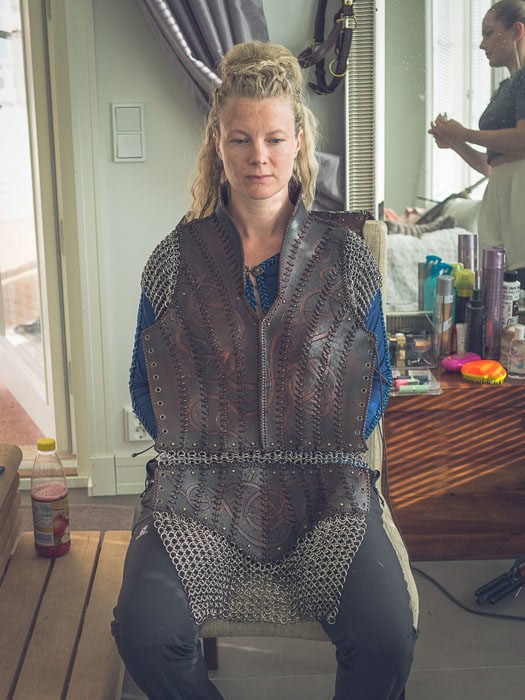 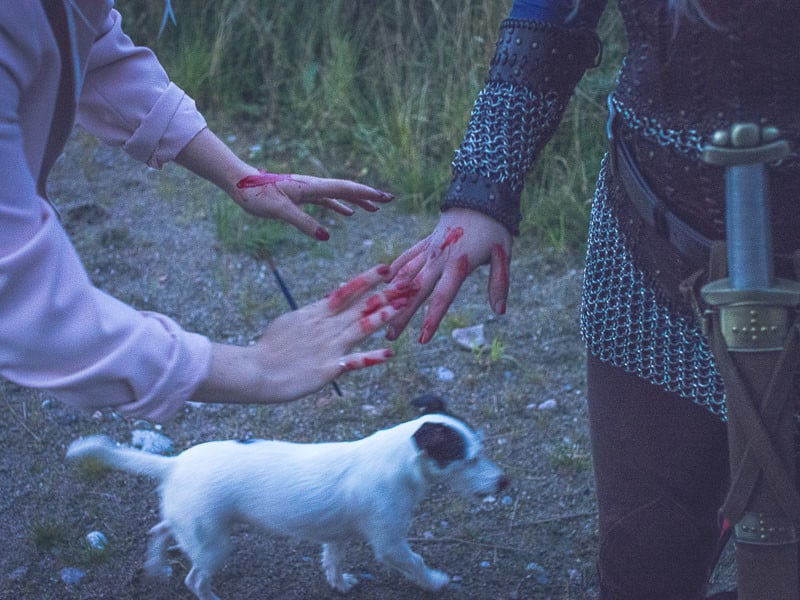 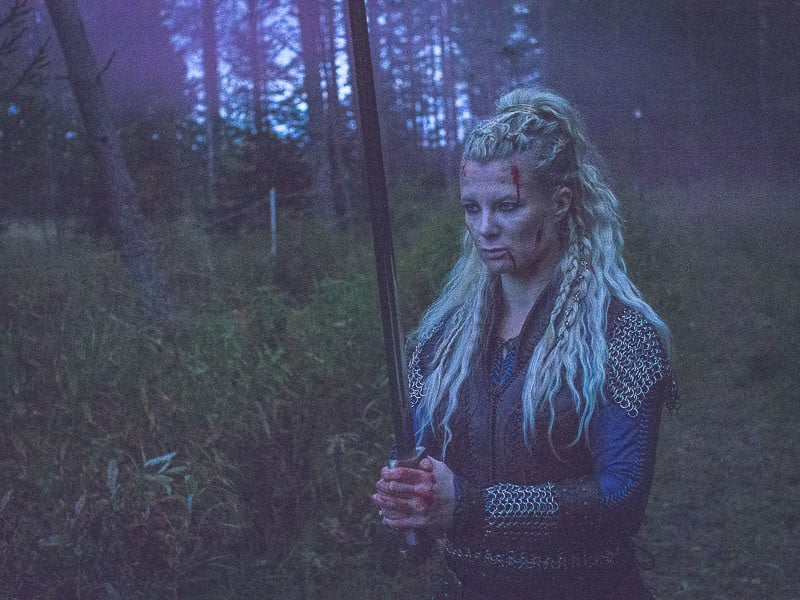 It took months to get everything together, but finally the day of the shoot arrived… and before you knew it, it was gone in a blur of flashes, smoke, grasslands and lake shores. 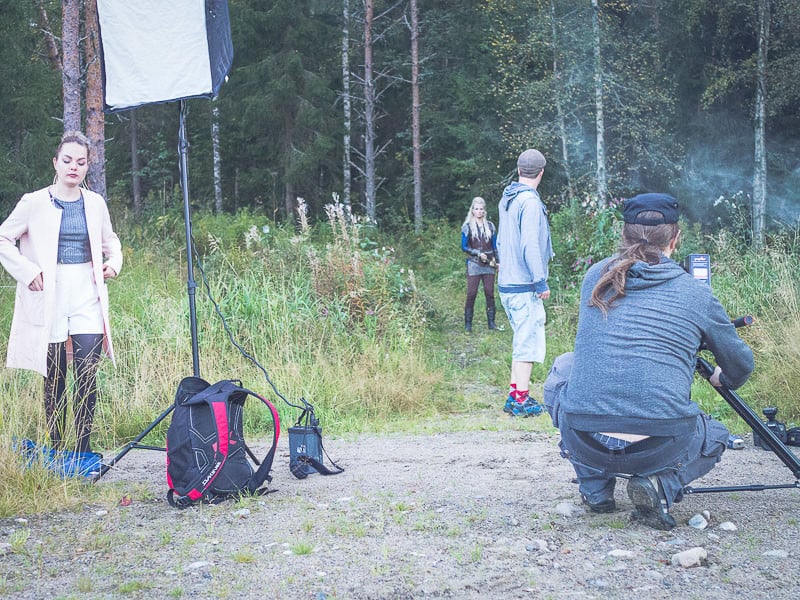 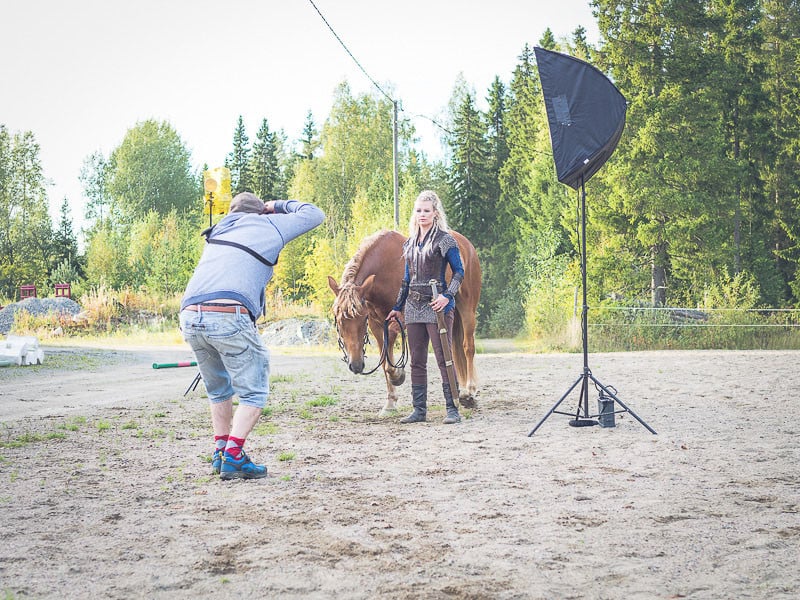 A few more days of retouching and here you have it… a successful birthday present and a proof of concept for myself: my dream of making movie posters is not just a dream, it could be a reality. 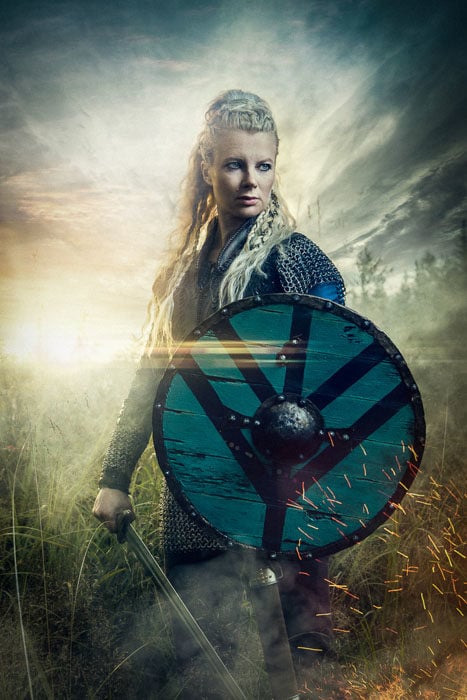 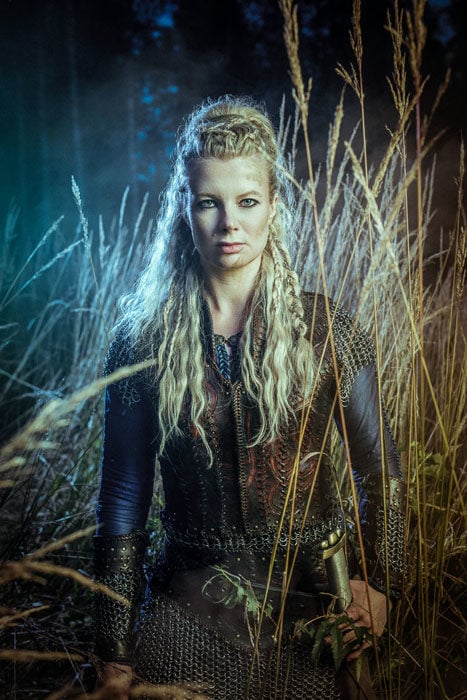 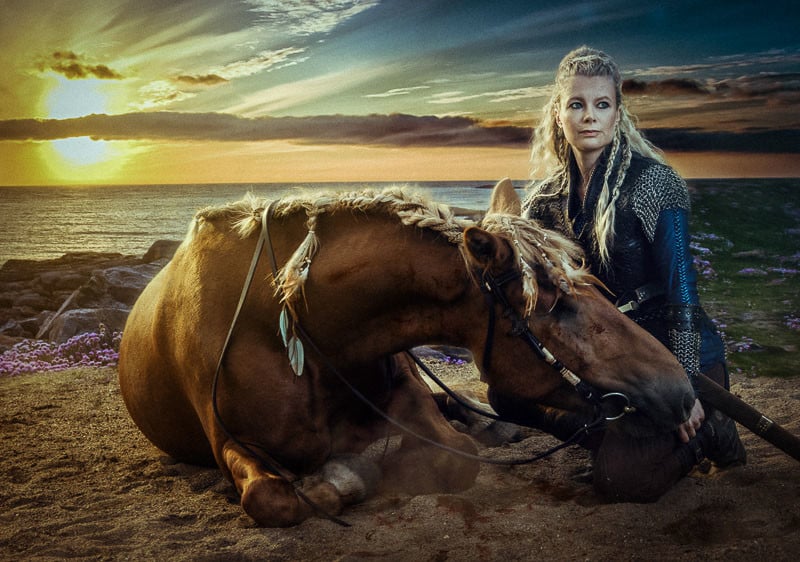 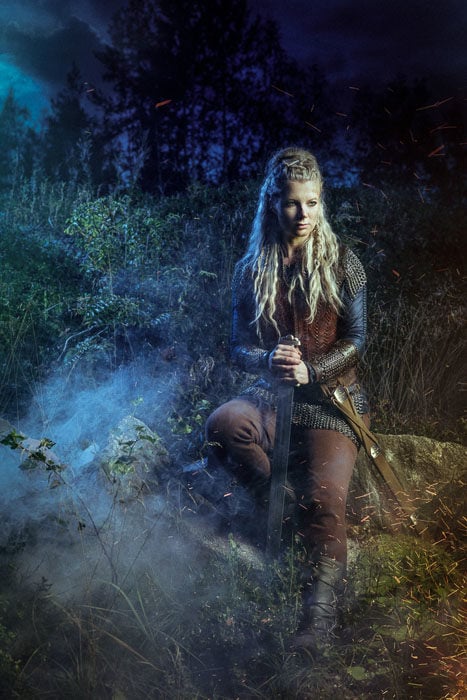 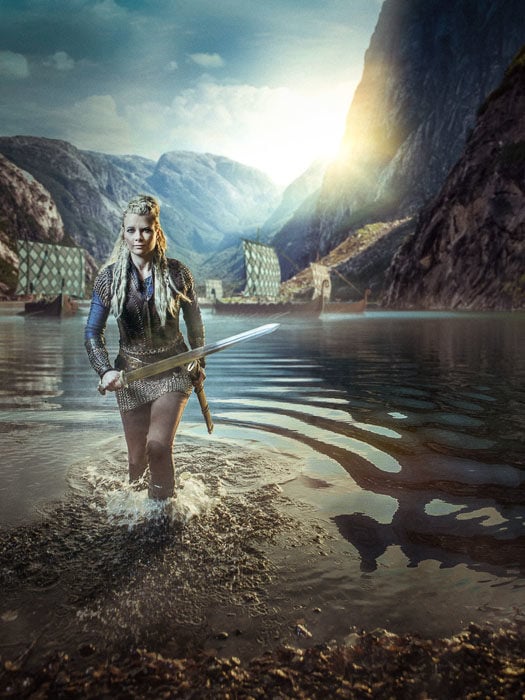 If nothing else, I hope these photos reach some of our favourite Vikings and will be seen as a kudos to a great show! So, watch out Katheryn Winnick, there’s a new badass shieldmaiden in town.

About the author: Antti Karppinen is a photographer, digital artist, and retoucher based in Finland. He is an internationally award-winning commercial and portrait photographer. You can find more of his work over on his website and blog.

Credits: Photos by Antti Karppinen, Sword by Tomi Saarinen of Midaan Kulta, Shirt by Saara Torkkeli of Saaraz, and BTS by Tuomo Jalkanen and J-P Palmunen.

The Science Behind the Red-Eye Effect