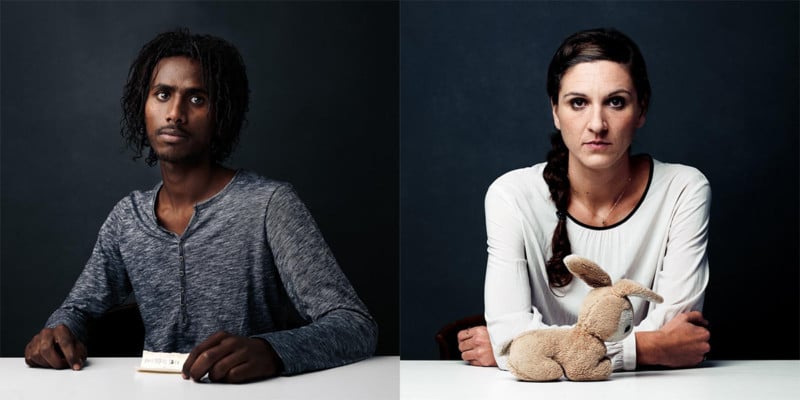 Commercial portrait photographer Gabriel Hill‘s typical day involves photographing big players in the pharmaceutical industry, some of the wealthiest people in the world. But his powerful personal project ImPORTRAITS is all about people who have almost nothing: refugees who escaped their countries carrying only the bare essentials… and sometimes not even that.

“My studio is right next to a building where refugees live and everyday when I go to work I see them and how they live,” Gabriel tells PetaPixel. “I always found it weird to be working everyday with people who own more than most of the people and, on the other hand, I see the refugees who own almost nothing. This contrast was quite interesting but also very sad.”

Touched by the refugee crisis, Gabriel decided he wanted to do something to help; as a photographer who believes wholeheartedly in the power of portraiture, what that something would be was obvious. 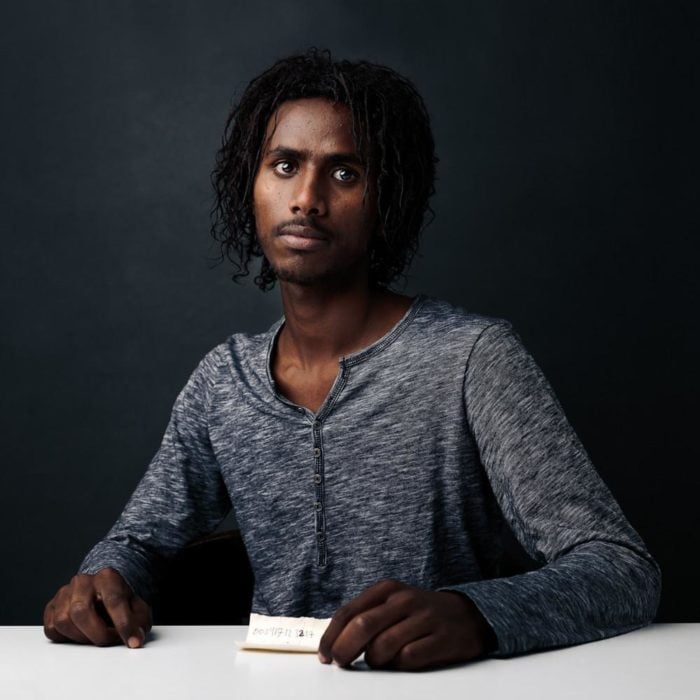 “I got on a ship in Libya that was supposed to bring us to Italy. I couldn’t take anything with me except the clothes I was wearing and a little piece of paper with the phone number of my family on it. They had told me to get in touch with them as soon as I would arrive in Italy. About half way, the ship overturned and sank. My clothes were soaked and became so heavy I had to take them off. They disappeared in the sea, along with that piece of paper with my family’s phone number on it. I survived, together with about 200 others. Over 250 people from that ship drowned.

Months after fleeing Eritrea I found someone in Switzerland who could reach out to my family. They thought I hadn’t survived the crossing. This piece of paper with their number on it used to be the most important thing I owned.” 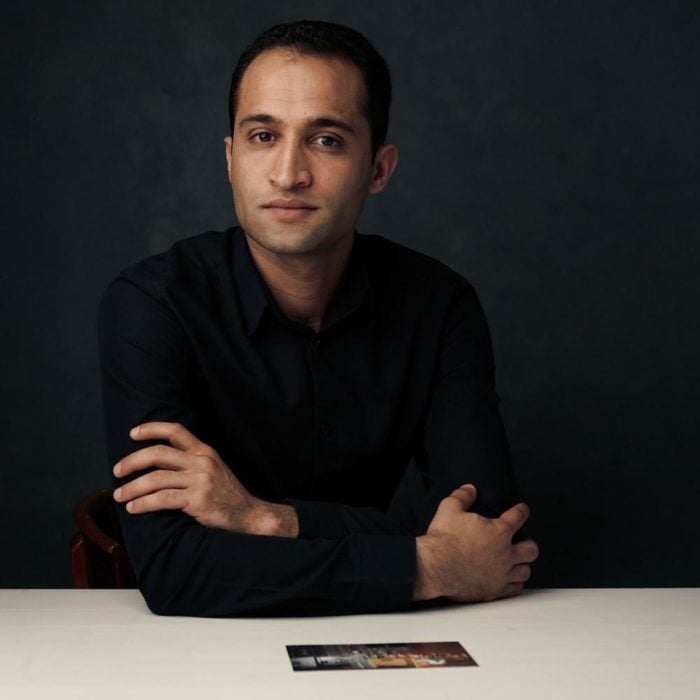 “I had packed some things from home but the smugglers told us to throw everything away. I didn’t have the heart to toss out the photo of my mother, so I hid it under my clothes. I haven’t seen my mother since I left, so this picture of her is very important to me.”

Marie-Therese, 62 – Fled the Democratic Republic of the Congo in 2008 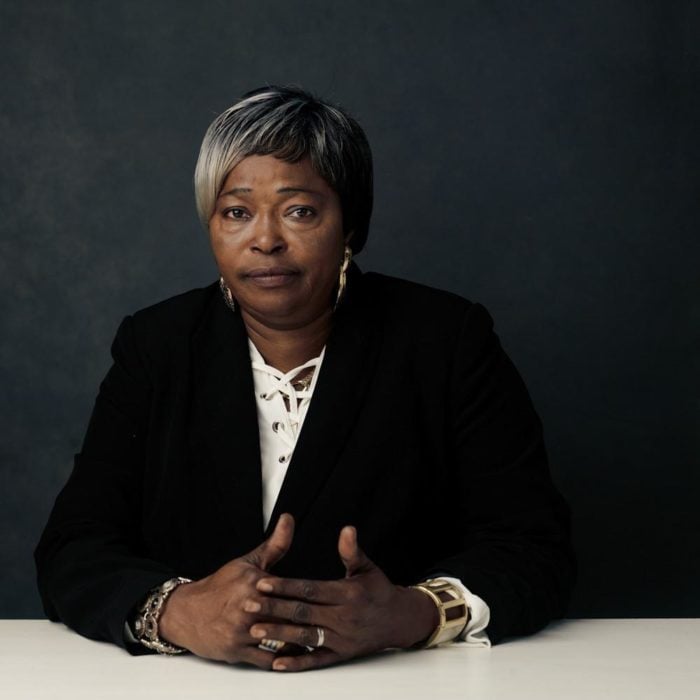 “I had to leave my home from one second to the other. Unfortunately, there was no time to take anything with me.” 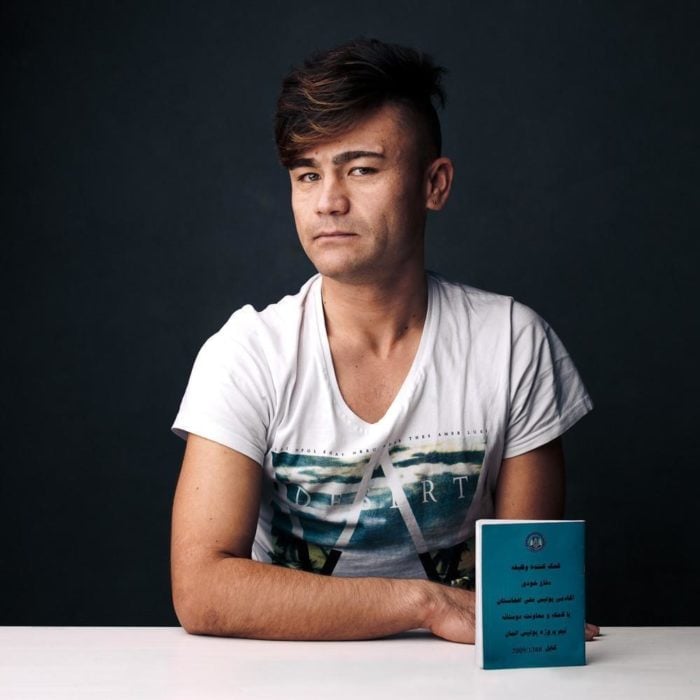 “Five years ago I had to leave Afghanistan. I was trained as a police officer there, but shortly after I had started on the job I was forced to leave the country.

I had a backpack with my belongings with me, but the human traffickers told me to throw it away. The only thing I have left is this little book from the police academy and a necklace my mother gave me.

I always dreamed of becoming a police officer. This little book is the only thing I have left of that dream.” 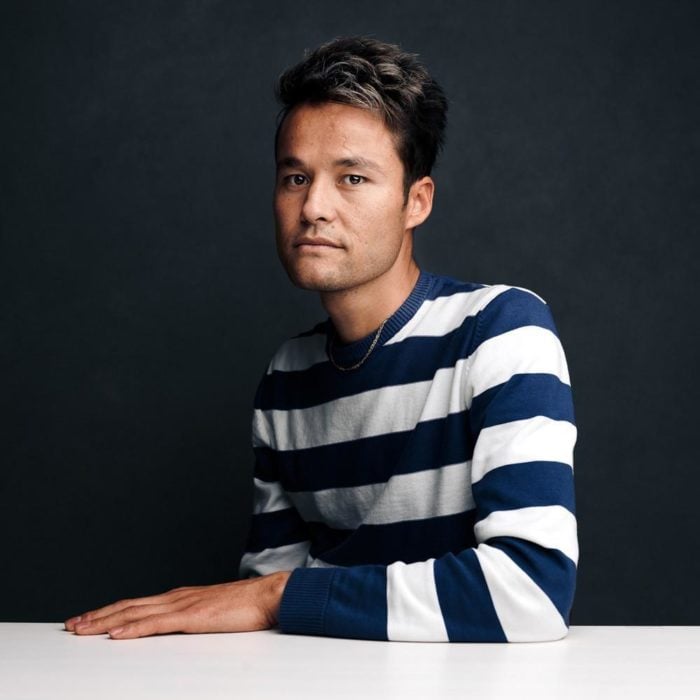 “Five years ago I fled Afghanistan. When I left, I couldn’t take anything with me except the clothes I was wearing.

I was very little when my father was killed, so I hardy have any memories of him. He always wore a golden necklace and after he died, my mother gave it to me.

I came to Switzerland by myself and this necklace is everything I have from my family and my homeland. It means the world to me—it makes me feel like I’m not alone, like my father is always with me.” 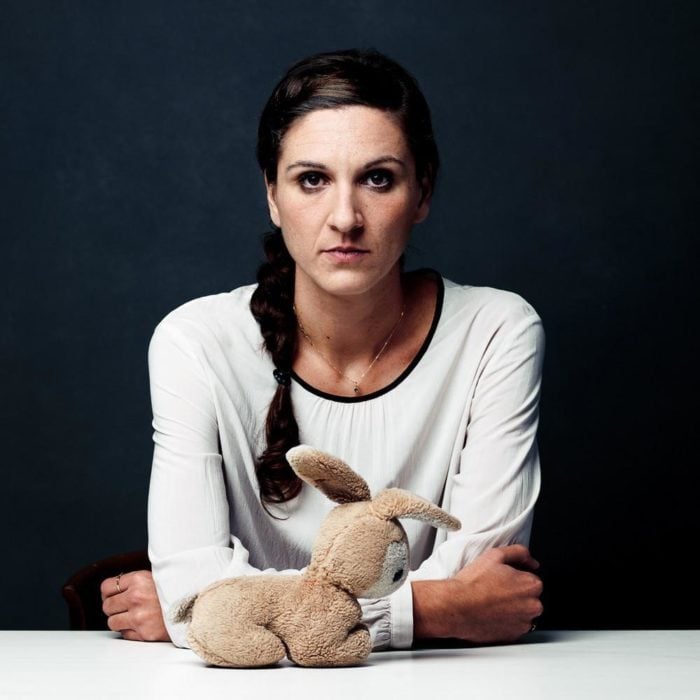 “When I was a child, my father would often travel to Africa for work. One time when I was three, I had asked him to bring me back a real life monkey, but he brought me a stuffed bunny he had bought for me during a transit at Zurich Airport.

I took that bunny everywhere. When the war began, everything went so fast I could neither understand what was going on nor think about what I wanted to take with me when we fled. That’s how I forgot my bunny when we left. My dad stayed behind, and I wrote him so many letters saying things like: “Did you find my bunny? I miss you!”

I can’t describe how I felt when I saw my father again three years later, in 1995. My whole body was trembling when I saw his face at the Airport in Zurich—and saw that he was holding my bunny.” 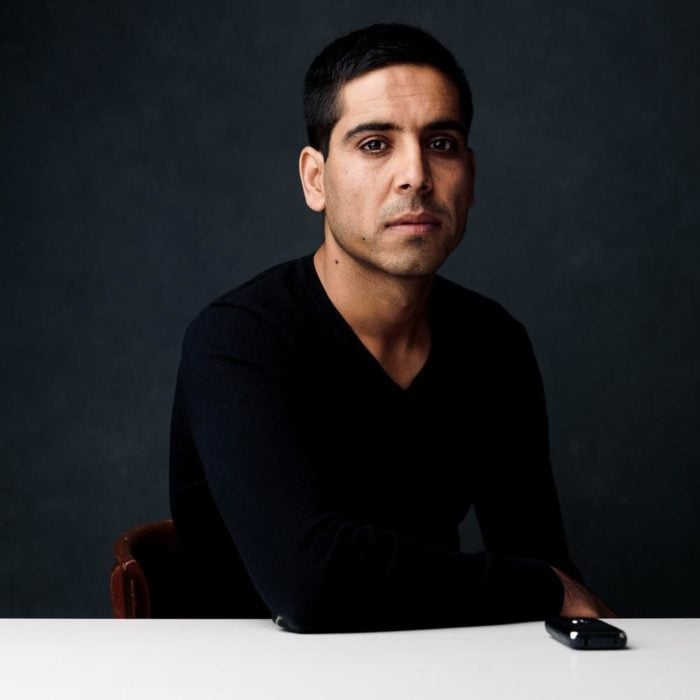 “I have been living in Switzerland for two years now. My family could only afford one journey out of the country, so I’m all alone here. It’s very expensive to leave, so they won’t be able to follow me here.

When I left home my father gave me a cell phone. This cell phone and the clothes I was wearing were the only things I could take with me.

Thanks to the cell phone I was able to get in touch with my family and tell them that I had arrived safely. It also gave me the feeling that I wasn’t alone. It meant everything to me.” 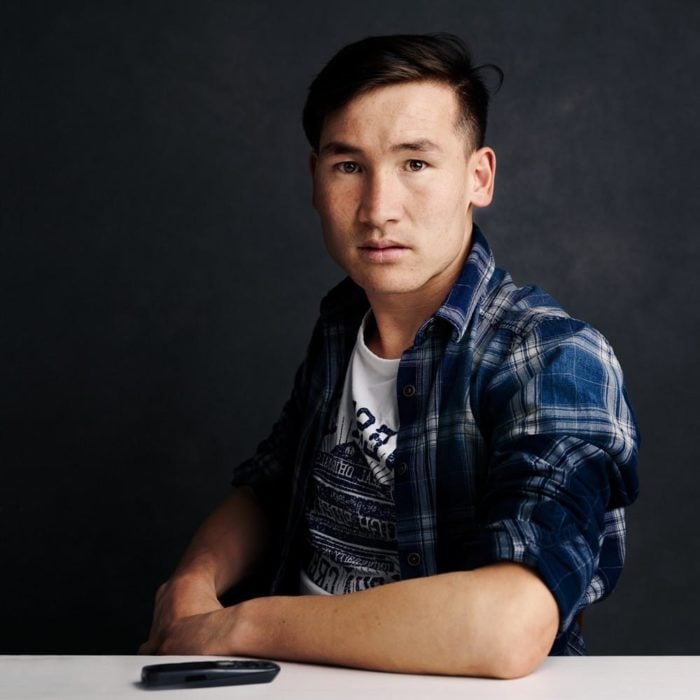 “It took me almost nine months to arrive in Switzerland. I wanted to take a ship from Turkey to Greece, but we kept getting caught by the coast guard in Greece and sent back to Turkey. I tried five times – once, the boat overturned and sank.

From all the things I took with me, only this cell phone is left. My mother bought it just before I fled Afghanistan – she spent 3.000 Afghani (about £34) on it. That’s half of my family’s monthly income.

The phone was the only way I could let my family know where I was on my journey and that I was OK. My mother was very worried, so a call from time to time helped to calm her down. The phone also made me feel safer and less lonely.” 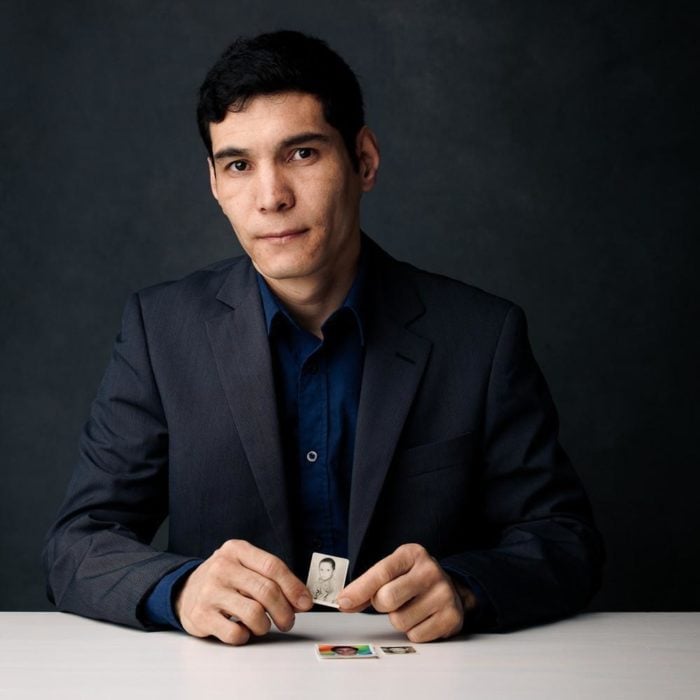 “Five years ago I had to leave Iran. The only things I could take with me was what fit in the pockets of my trousers.

After a few months I arrived in Switzerland. I made most of the journey on foot. Every now and then we had to cross a river on a rubber boat.

I only took these three photos with me. Every one reminds me of a different time in my life before I had to flee – times I have warm memories of. I would have taken more things with me if that had been an option at the time, but it wasn’t.” 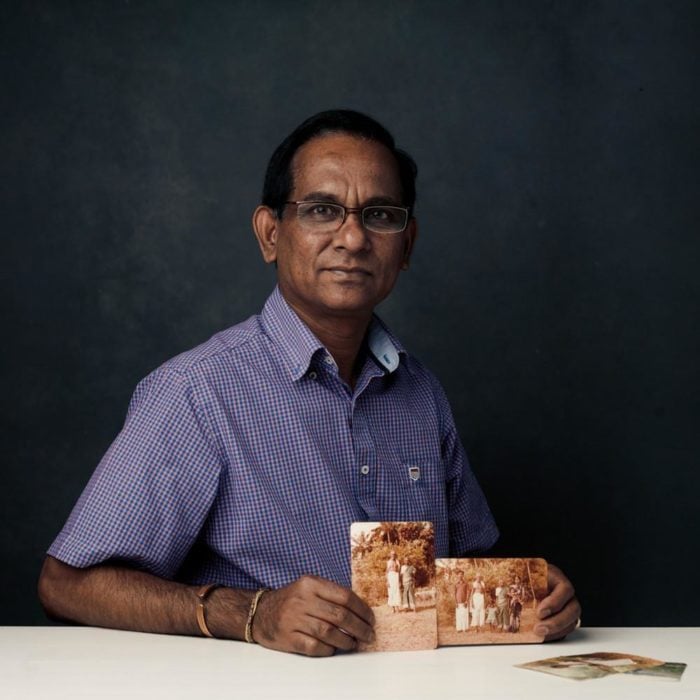 “I had to abandon our home in Sri Lanka in 1984. I walked most of the way, but in order to get to Switzerland I took a boat, a plane and a train as well.

I wasn’t able to take much with me besides the clothes I had on. Since I had to leave my family behind, these photos were the only things that were important to me, and luckily I could carry them on me. On the photos you can see my parents, my brother and my sister—who’s now deceased.” 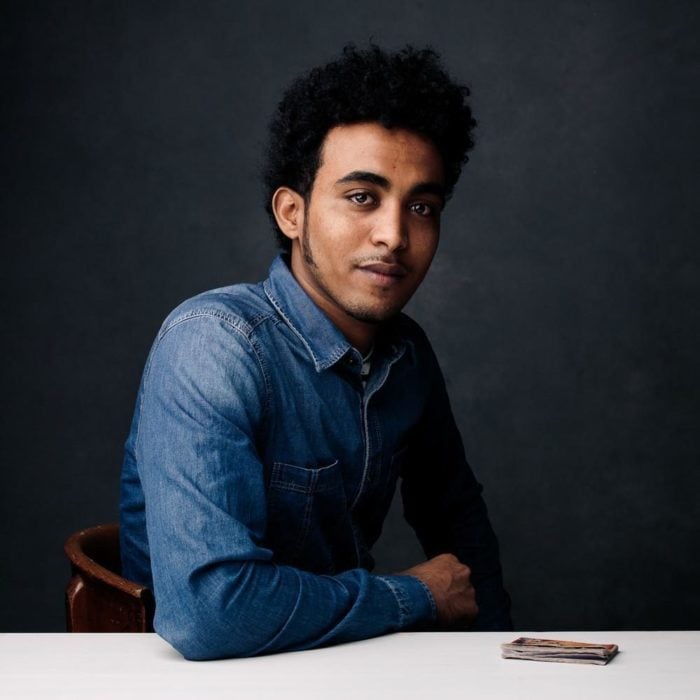 “The escape from Eritrea was quite long and exhausting. Walking for days, being held captive in several countries and crossing of one of world’s biggest deserts didn’t make it an easy journey. We were lucky, though. Everyone survived.

I took some personal things with me but I had to throw most of it away before crossing the desert so I could take as many bottles of water with me as possible. I kept a small book with phone numbers and a few photos from my childhood.

The phone numbers were very important, because I was held captive a few times and had to pay my captors a ransom for them to let me go. I’m lucky enough to have an uncle in the United States—he’d send me money so I could pay. That made his number the most important thing in my life.”

Gabriel’s portraits are powerful. And their power, he believes, lies in the fact that they give you a glimpse at the human behind the news headline.

“There are millions of images and portraits of refugees but usually very dramatic ones… For sure it’s important to show the world how they have to live in the camps or how they travel for documentary reason, but sometimes I feel the photographers “catch” them in their most horrible moments,” Gabriel told us. “I wanted to take a different approach and show them with pride and without any dramatics. In order to feel with someone you have to know a little bit about him and I wanted to make people feel with them.”

To see the whole project or find out more about ImPORTRAITS—the name, by the way, is meant to convey that these “portraits depict importance”— head over to the project’s website by clicking here. And if you’d like to see Gabriel’s other work, click here.

Image credits: All photographs by Gabriel Hill and used with permission.

Filming the Northern Lights… in Real Time… with a Drone