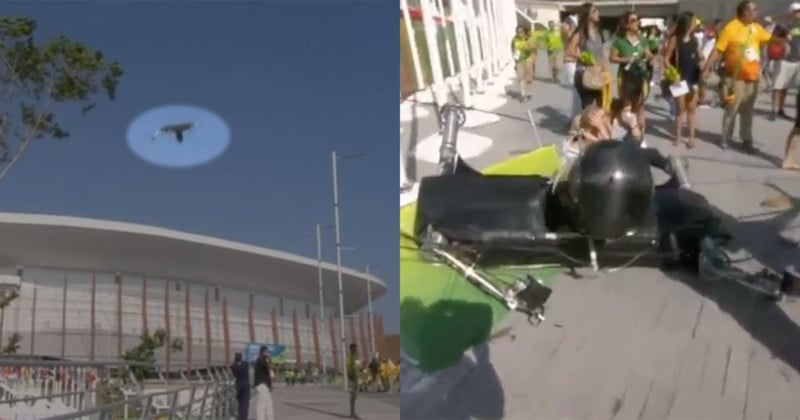 A massive aerial TV camera suspended by cables outside the Olympic baseball venue in Rio came crashing to the ground on Monday afternoon after both the camera’s guide cables snapped. The camera fell approximately 65 feet, injuring 7 people in the process.

The Olympic Broadcasting Services (OBS)—an off-shoot of the International Olympic Committee that operates these aerial cameras around the Olympic park—launched a full investigation into the incident and are describing it as a freak accident.

According to a statement released by OBS, the camera’s pulling rope came down around 1:30pm, prompting them to ask for a cherry picker to recover the rope and access the camera.

“At that time the camera was at the height of 10 meters above the concourse, supported by the two independent guide ropes, each of which could carry the full load of the camera,” explains OBS. But a few minutes after they requested the cherry picker, both guide ropes snapped simultaneously and the camera came crashing to the concourse 65 feet below.

Chris Adams, a gymnastics fan from Britain, told NBC News he heard the cables snapped and watched horrified as the huge camera came crashing down next to two women. “This thing is big, and it shot through the air,” he told NBC. “It came down at such a speed that they wouldn’t see it. They weren’t expecting it.”

Fortunately all injuries, including the two women, have been described by medical officials on the scene as “minor.” However, a few feet in one direction or another and this could be a very different story.