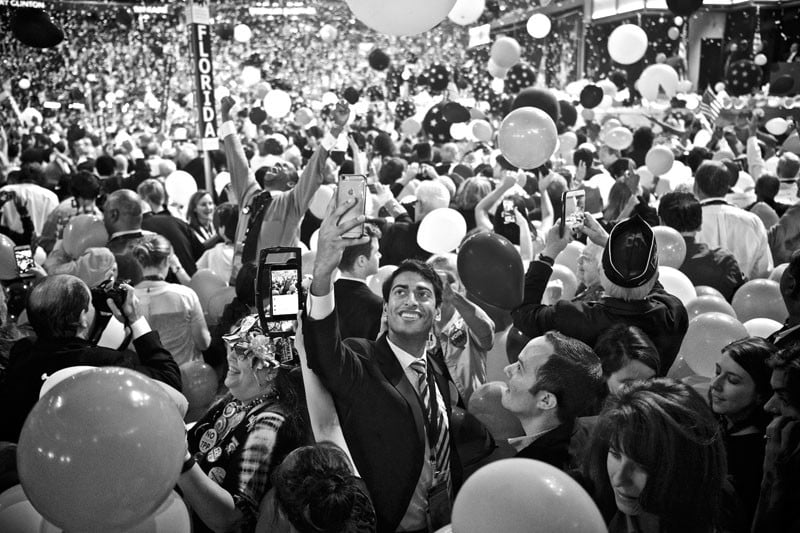 Now that a little time has passed I thought I would put together a post on my experiences covering “the crazy” at the recent Republican and Democratic Conventions in Cleveland and Philly respectively.

It is a tough shoot. When you’re at an event with 15,000 of your fellow journalists (covering less than 4,000 delegates) it’s obviously a tight squeeze reminiscent of trying to squeeze into a packed subway car during peak New York City rush hour—and then start taking pictures. 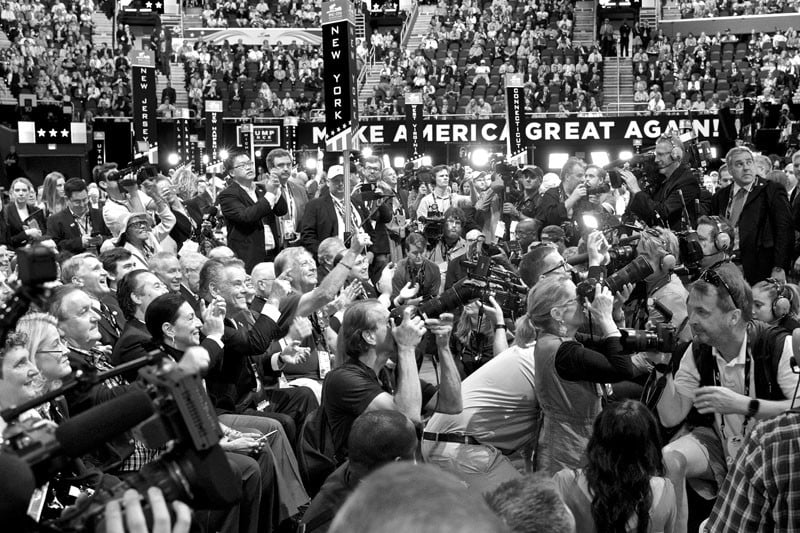 First some background. I’m a professional freelance photographer obsessed with and passionate about photography (exhibit A and B: my website and my book, The Passionate Photographer). The best way to move forward in my work has been through personal projects, which is why I sought to be accredited by the Secret Service to cover the political conventions, which I have photographed since the Republicans held theirs in New York City in 2004.

In those days my Nikon D70s and their “large” six-megapixel sensor seemed more than enough resolution to capture the action. I knew I would be shooting lots, so I wandered down to B&H Photo to spend $200 plus for 2GB CF cards, a good deal at the time.

Fast forward to last month. Much has changed technology-wise as my Nikon D5/D500 camera combo will attest to and those 2GB cards are now 128GB cards for much less than I paid in 2004…but on to the work.

I keep coming back to the conventions because for a recent proud American Citizen from Canada—the American Political process is very interesting (though I’m sure Americans will find other adjectives to describe it) and it crescendos for two weeks every four years at the conventions. 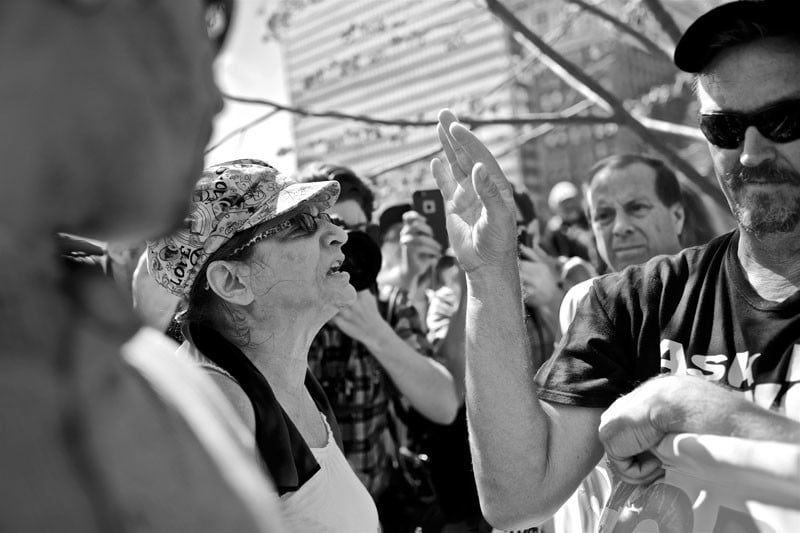 First the logistics. It’s the American way to gauge consumers when demand outweighs supply, which is why Super 8 can charge $400 a night for a hotel room and 25-cent Costco bottles of water cost $4.50 each or more. So I depend on the kindness of strangers to provide accommodation at a reasonable rate, and it has always worked out.

The challenge for me visually is to peel back the curtains and show my perspective on what I’m seeing and experiencing…hopefully offering some insight not always seen in media coverage. 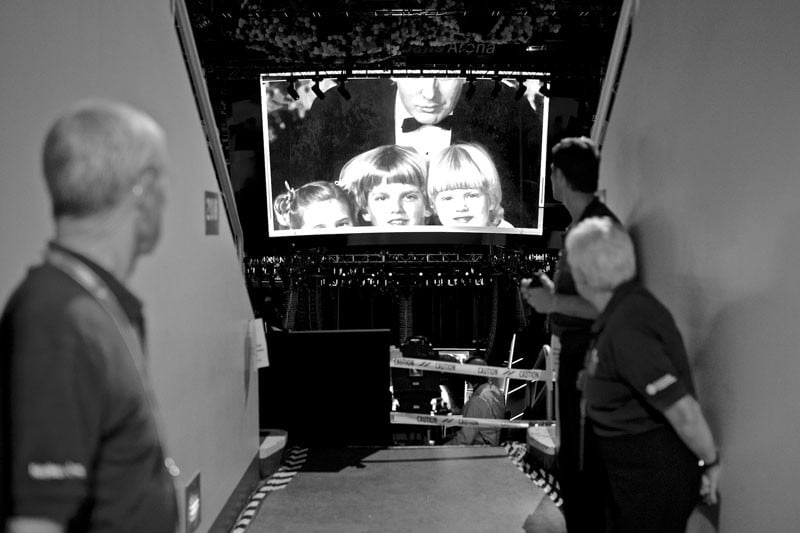 Every day is similar. Wake up early, get to the venue, work all day and night, eat on the run, get back to my room, edit and sleep four hours and start all over again. But I do not complain; everyone attending the conventions has pretty much the same schedule and for me, I need to put in the time to get the kind of images to round up my coverage of conventions and hopefully publish the work in book form in 2017. It is a project that takes two weeks every four years, my “personal project Olympics”. 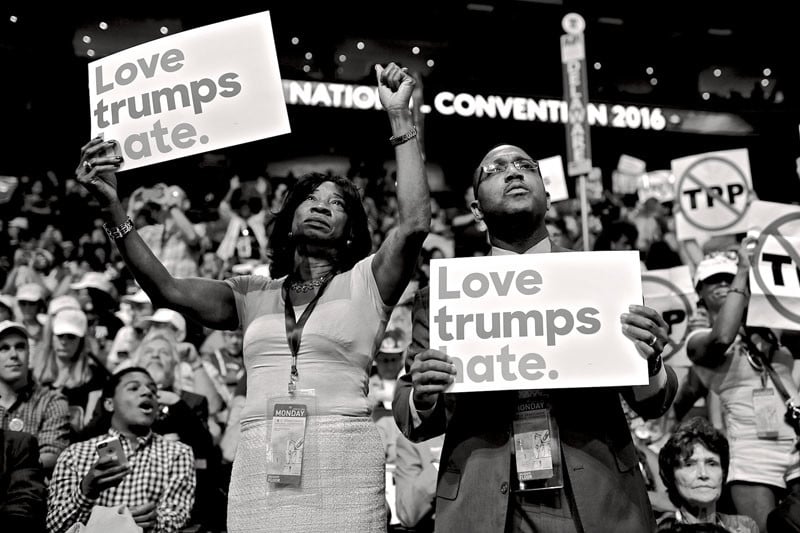 In Cleveland for the Republican National Convention I had an uneasy feeling, similar to when the RNC was in NYC in 2004, when— 9/11 was still a fresh memory and the city was bracing for what turned out to be a fairly raucous convention.

In Philadelphia for the DNC the expectation was less ominous, but there were other problems. The venue was smaller and darker which made access much more limited. 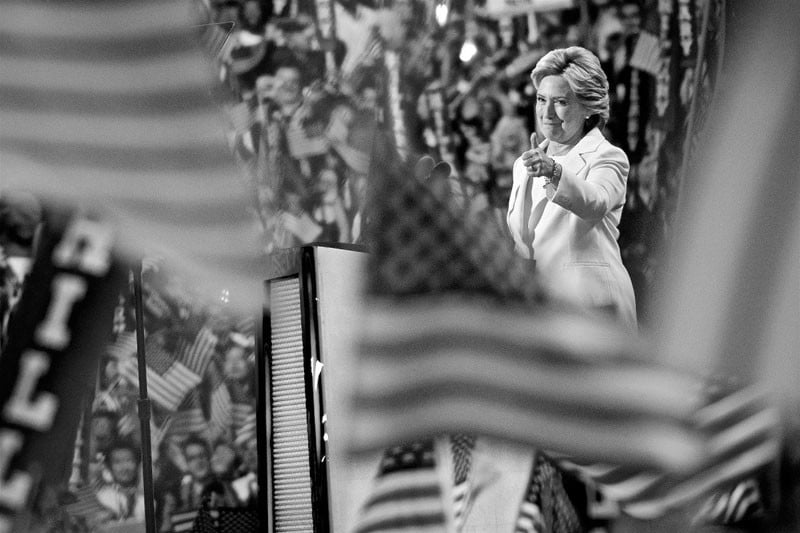 My plan was to peek behind the curtain at what is a dramatic time of uncertainty and nervousness. Political conventions are theatre. Everything is stage-managed for maximum message delivery. Inside the political arenas everything is tightly controlled. Outside, all bets are off. I’m a one-man band and I can’t be inside and out obviously so I depended on serendipity to get what I needed. Again, photographically I do not need to do a complete report on the convention—I just need to add to my existing body of work; but I find that when I try and tell a full story it means I work a little harder and the work gets stronger, so I do. 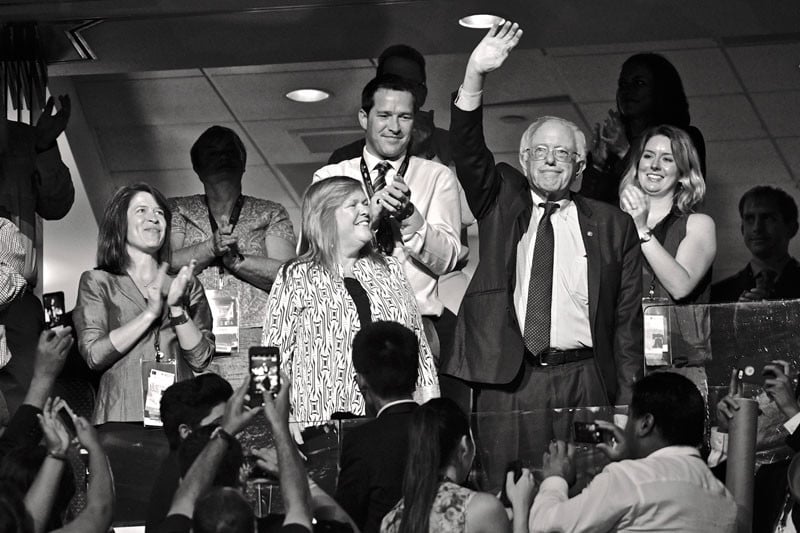 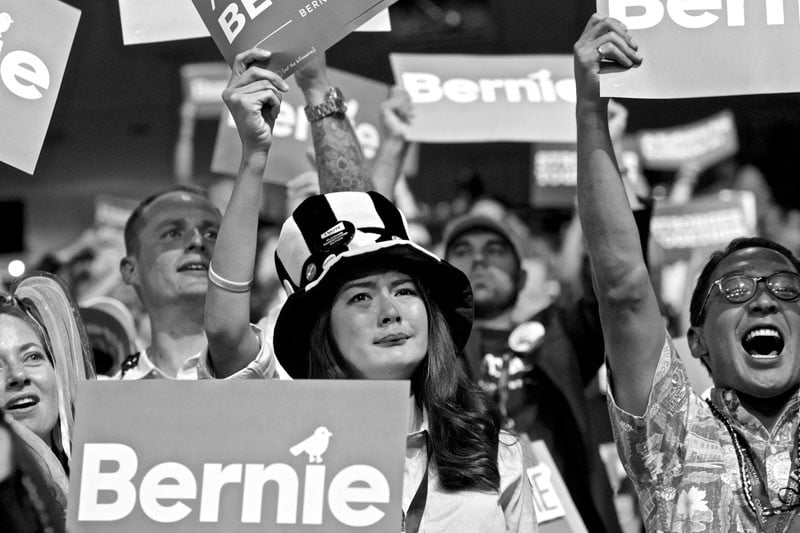 That was my general agenda. I find it’s good to go in with a plan but be open and ready to throw out any pre-conceived ideas to replace with something better.

From a technical perspective, I’m took my Nikon D5 and D500 which turned out to be a great combination for capturing the action, particularly with both cameras having very fast frame rates. 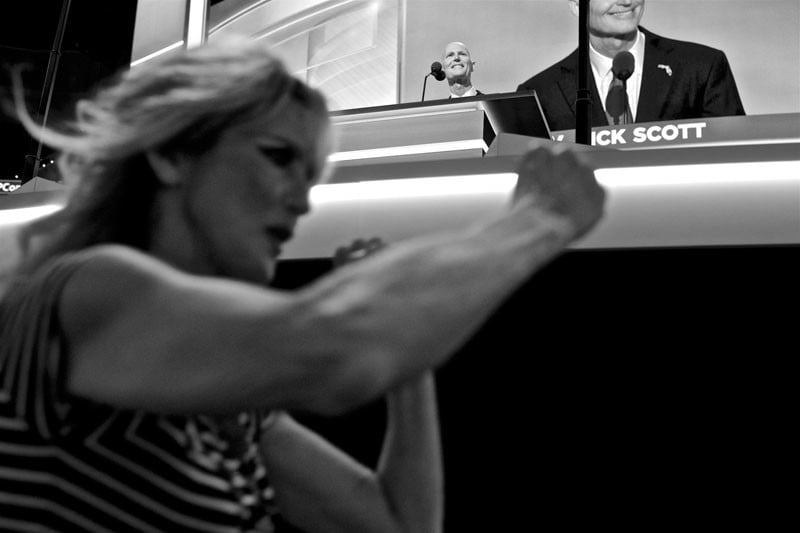 My idea from the beginning was to cut to the content and I find black and white does that very well. So I shot RAW but turned my picture control to monochrome to see how color translates into gray-tones. I thought long and hard about lens selection. In 2012, I did the majority of my work with two 1.4G Nikkor lenses: 35mm and 85mm and full-frame D800 bodies.

This time I took two 1.4G lenses, my favorite 35mm and my new 58mm, which I find a great focal length (on full frame bodies) especially when I have the flexibility of moving around and in closer. It feels more comfortable for me to shoot with than my 85mm. I had never really liked the 50mm focal length on full frame but 58mm seems to make all the difference.

After looking at my stuff from Day 1 at the DNC, I realized that access was a problem. Even though I was able to get on the convention floor on a rotating basis, an hour at a time–the floor could be very restricting. Security was much stricter which meant no shooting in the aisles or at the front of the stage. 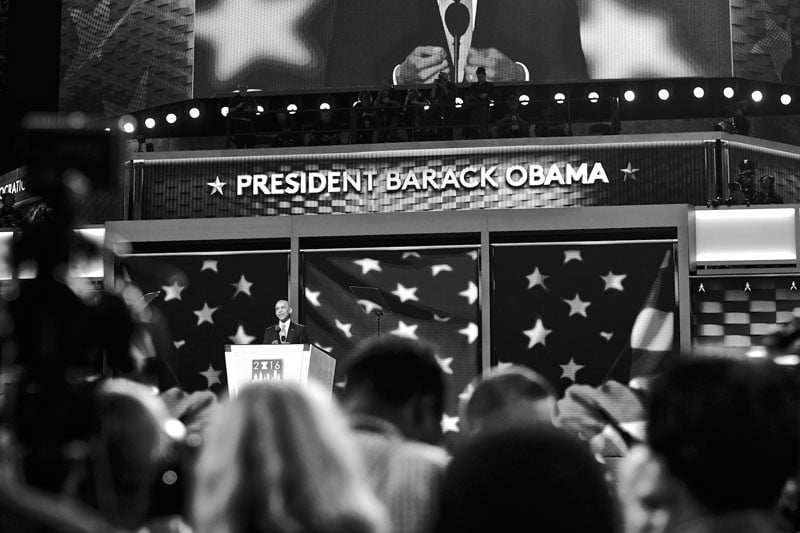 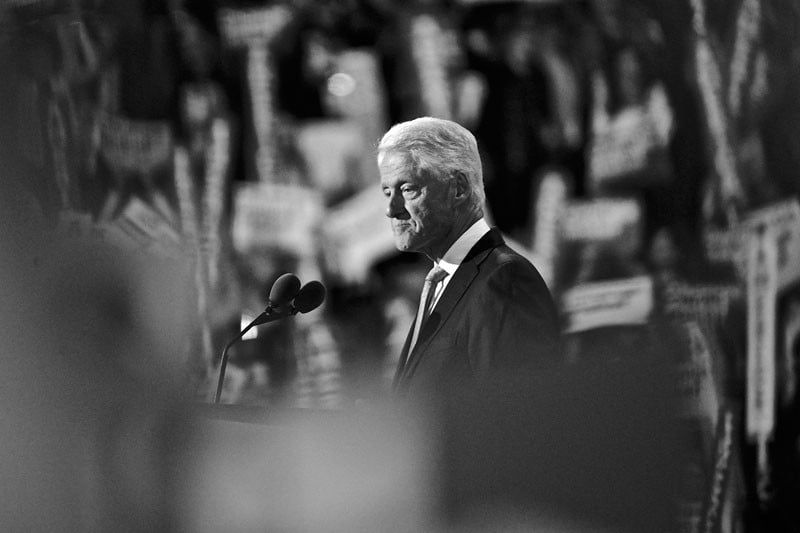 As the conventions move forward, things get busier. You can’t often stop since to shoot as security “encourages” you to keep moving and the designated shooting spots are few at floor level unless you have access to the buffer zone reserved for the big circulation publications. With the headline speakers, security without warning will lockdown the floor, which means if you’re out renewing your floor pass—you can’t get back. 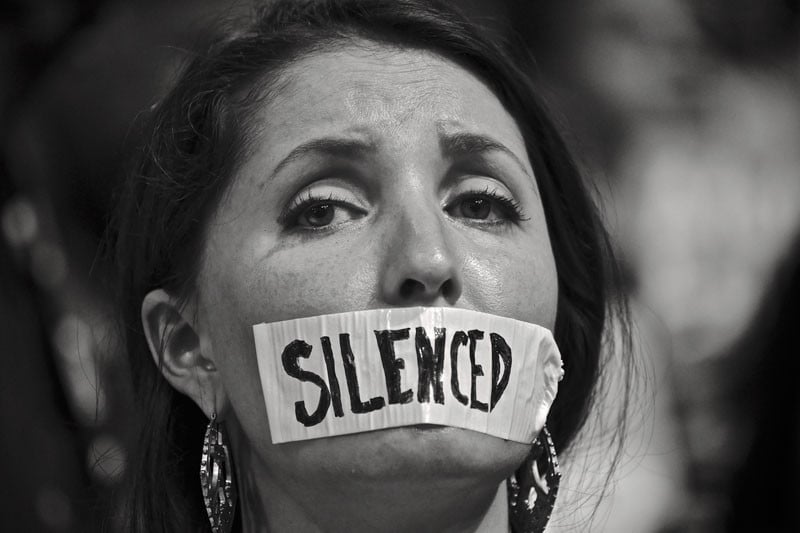 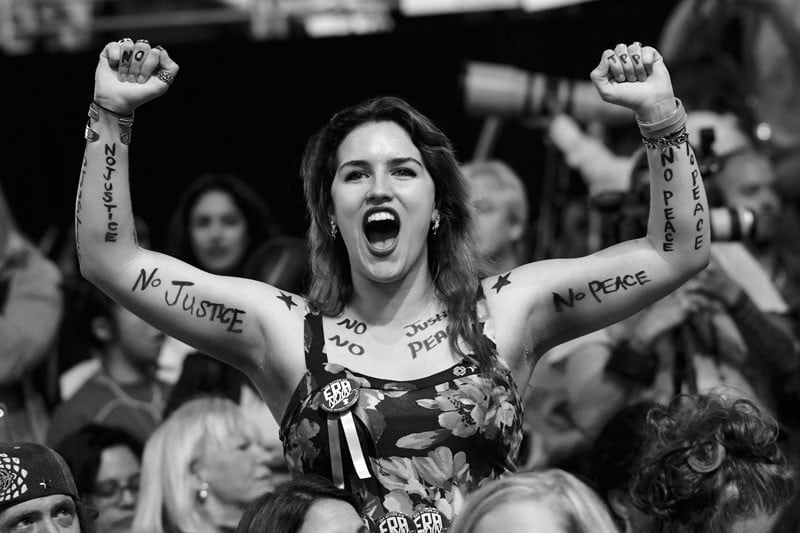 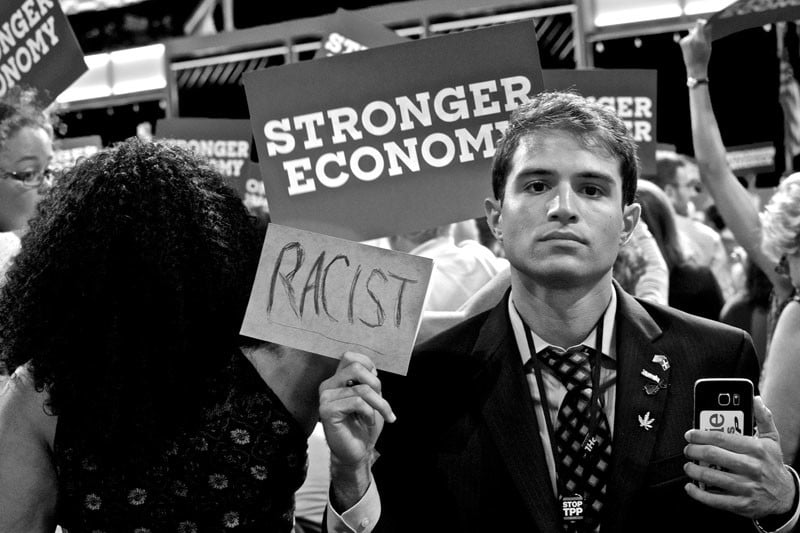 I knew that I would need more reach so why not take advantage of the Nikon Professional Services (NPS) booth on site. By the time I got there most of the big glass was gone but there on the table was a Nikon AF-S NIKKOR 200-500mm f/5.6E ED VR lens. It was slow, but I have a D5 so shooting at 8000 ISO is not an issue, the quality is nice.

This would not be my first choice of lenses to borrow, but it turned out to be a great choice. It’s light for a zoom of this range and most importantly, it’s sharp. Photography is about problem solving and this long zoom solved my problem of not being able to get close enough or in the spot that I wanted. For an event like this, I have the freedom to find angles and perspectives that might give the work a fresh look and that’s what I did. 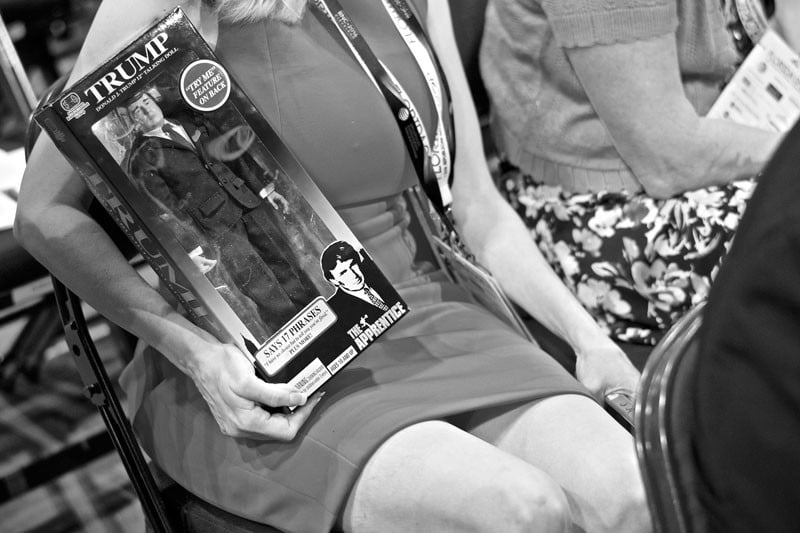 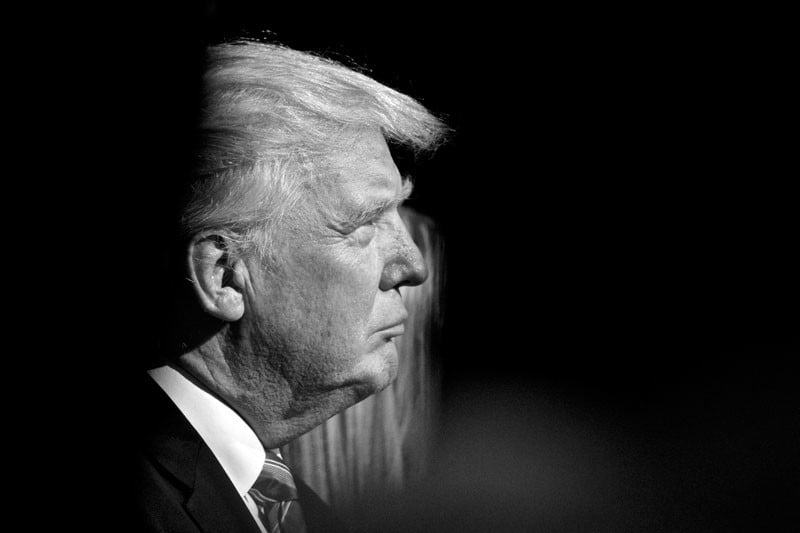 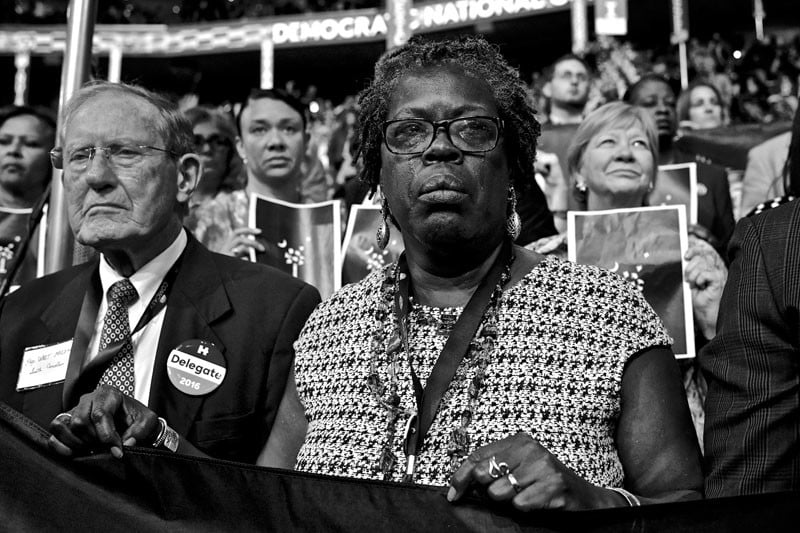 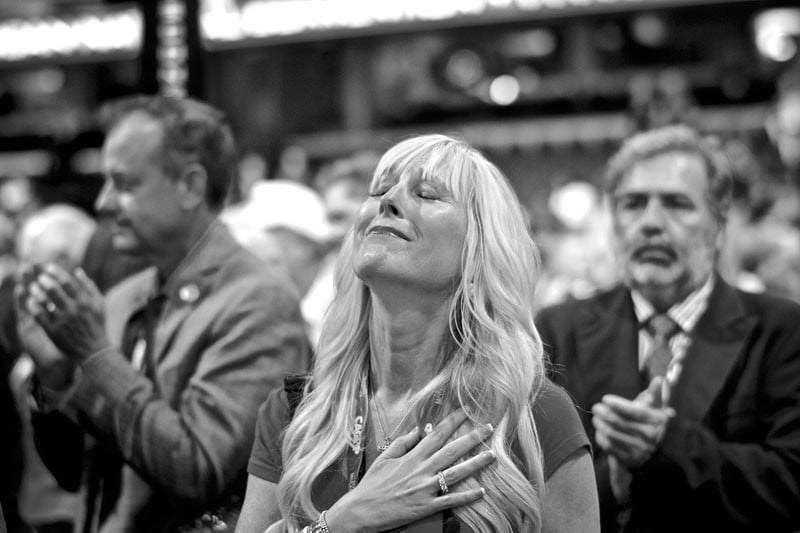 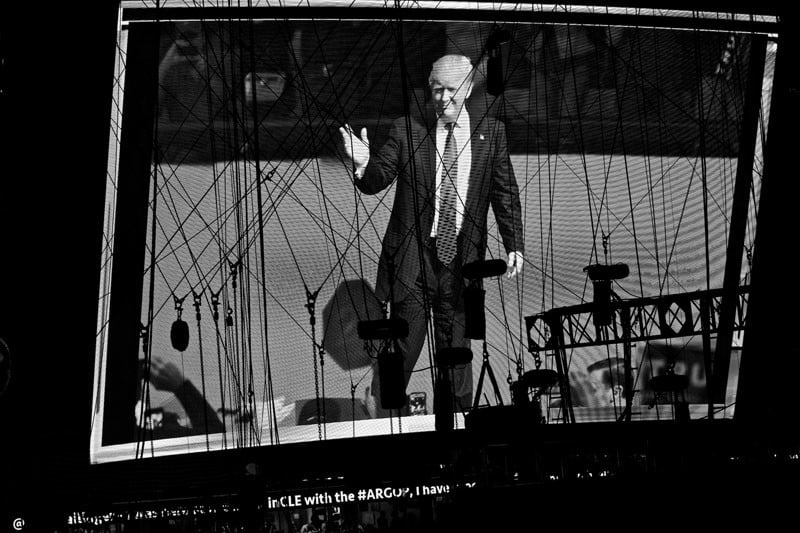 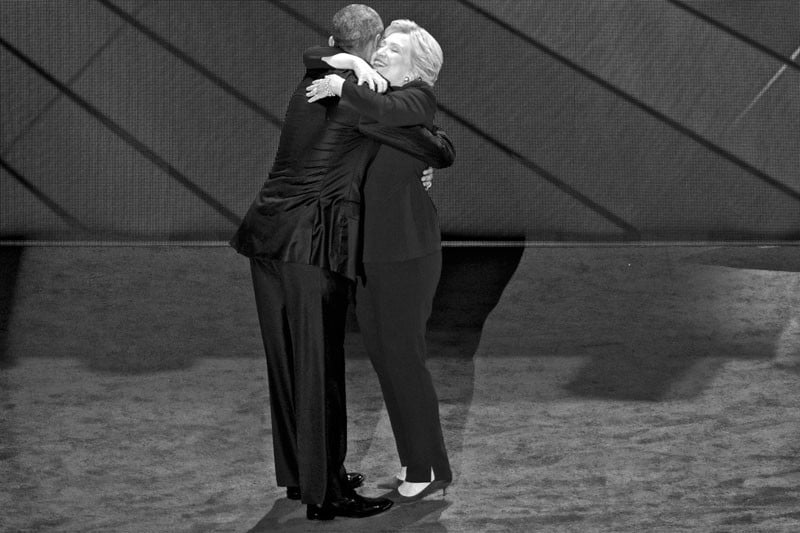 I always tend to shoot more early at the conventions because it’s hard not to repeat yourself as time goes on. I get more selective.
For the final moments of the convention I often choose a “bread and butter” high position which lets me capture a dramatic and clear overall view of the finale, which is what I did at the RNC. 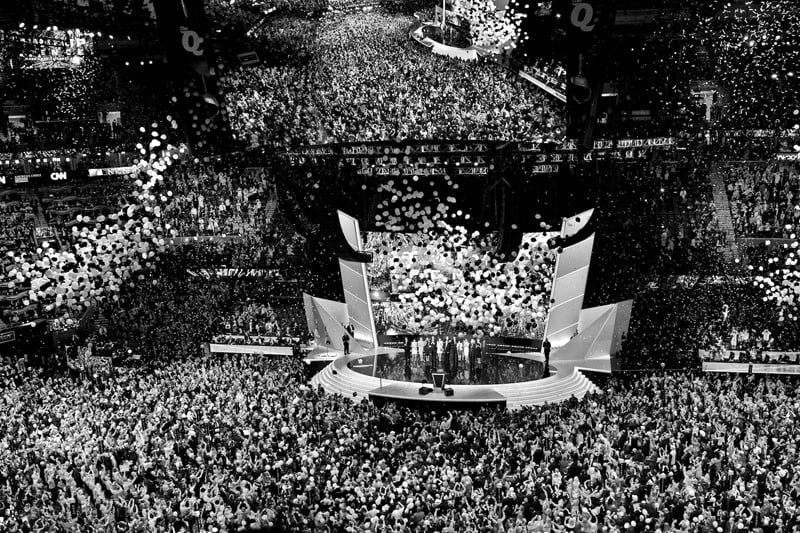 For the Democrats, I chose to stay on the crowded floor since this coverage is for a book I have the luxury of not absolutely needing this balloon drop for the overall project. Though I was stuck off to the side at floor level I did manage to get some images, though most of the shots were blocked by enthusiastic supporters and their large signs or flags. 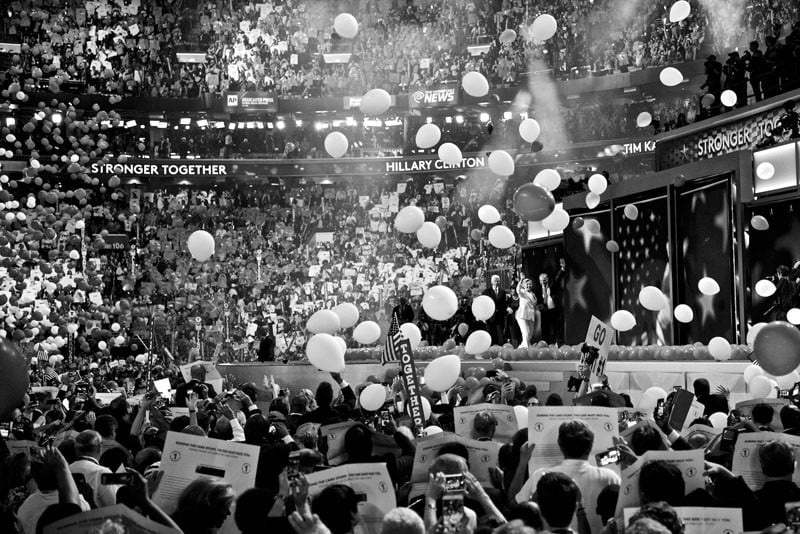 That said, I got a shot or two I liked and can use and in the end, I was glad to share in the excitement at floor level…if just for the experience of popping a few balloons myself.

About the author: Steve Simon is a photographer based in New York City who’s obsessed with documentary photography and all things photographic. When he’s not shooting political conventions Steve shoots advertising campaigns for Nikon and leads street photography workshops around the world. You can find more of his work and writing on his website, blog, Twitter, and Instagram.