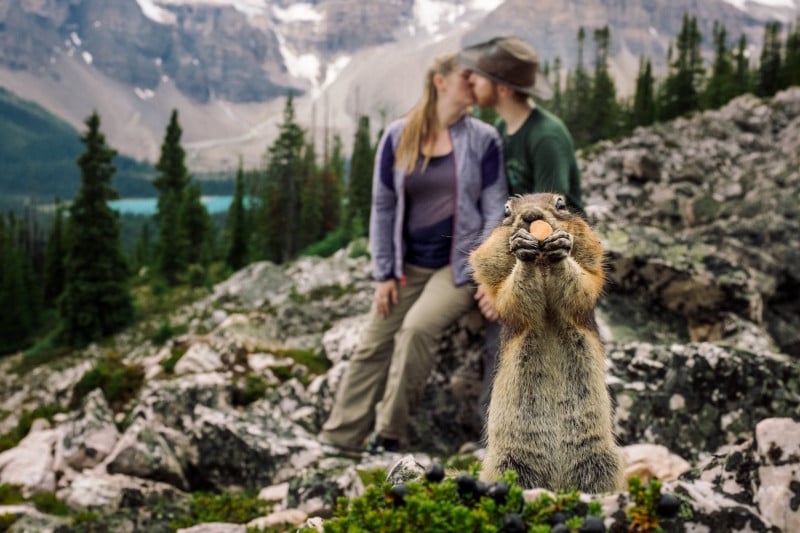 Hands up, cheeks bulging, food properly presented to the camera, if we didn’t know better we’d say this squirrel had been perfecting her photobomb skills ahead of the big moment. When Dorota and Marcin Karpowicz of BDFK Photography clicked the shutter, months of training paid off… Olympics style.

Okay, maybe that was a touch dramatic, but the photo is borderline unbelievable. Even the couple in the photo, Kelin Flanagan and Spencer Taubner, said their parents accused them of Photoshop. But as Marcin and Dorota tell CTV News, it is 100% real, even if it wasn’t entirely spontaneous.

They sat the couple down in front of this beautiful vista in Banff National Park on their way back from a failed photo shoot due to bad weather. The spot was gorgeous, so they thought they’d salvage a shot or two out of the hike, but no sooner had Kelin and Spencer sat down that squirrels began scurrying around them getting at nuts some other hikers had left behind.

“Somebody left nuts over there,” says Marcin, “so we just waited until a squirrel picked up the nuts.” They began firing off images, shooting about 50 in all before the perfect photobomb materialized in front of them.

The Karpowicz couple revealed a few more details about how exactly the photo was captured and post-processed in an interview with the Huffington Post.

The aperture was f/5.6 in order to see the kissing couple in light blur, but still recognizable. [We] also added the sharpness in Lightroom/Photoshop in order to make the squirrel pop more. We used the Kodak Ektachrome film preset in order to tone down the colors.

The little squirrel is so incredibly photogenic, the image immediately went viral once the photo was shared on social media. For our money, this one is way more photogenic than the last viral squirrel photobomb back in 2009.

To see more of the Karpowicz’s photography, head over to the BDFK Photography website or give them a follow on Facebook and Instagram. And if you need a little incentive, know that if you scroll back far enough through their feed, you’ll find a cow photobomb that happened during another of their romantic photoshoots just last month.

(via CTV News via DigitalRev)

Image credits: Photograph by BDFK Photography and used with permission.

Free Collection of Custom Lightroom Presets from a Fuji Ambassador