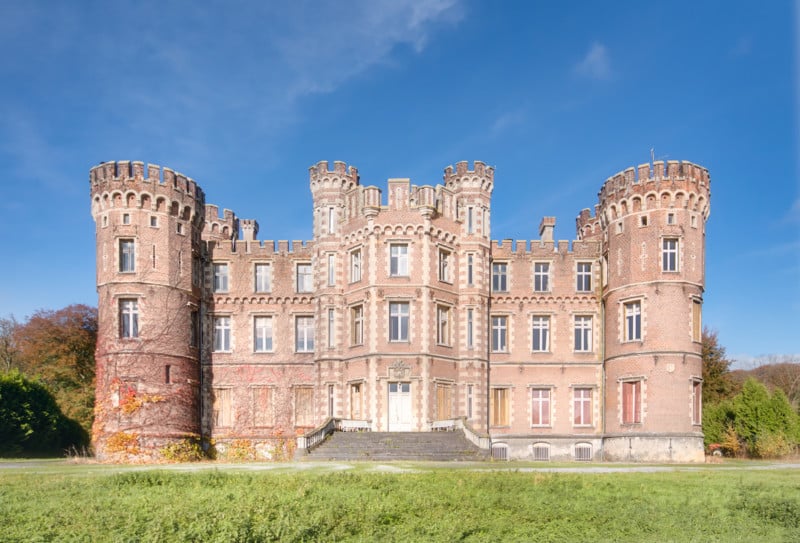 Have you ever walked by a beautiful castle and wondered what was inside? I have… and I’m lucky that I have seen quite a few from the other side of the door.

This amazing building in Belgium was lovely and also very exciting to explore. It has been abandoned for nearly 10 years and has recently been sold to a new owner. The pictures in this blog are taken in 2013.

This particular castle is one of those places that was on the top of my wish list for a long time. And after considering my options for a couple of years, it was time to take the challenge and try to enter the building. We did our best to prepare our entry. The alarm was set in the middle of the night so that we could enter in complete darkness and not be seen. We parked our car miles away and walked to the castle. Once on the terrain we had to use GPS navigation to navigate our way through the forest on the terrain. All of a sudden we could see the castle arise and the forest disappear. This was the moment I was waiting on for so long.

Seeing the castle exterior for the first time in real life was breathtaking. It was huge and beautiful, even though we could barely see it in the darkness. 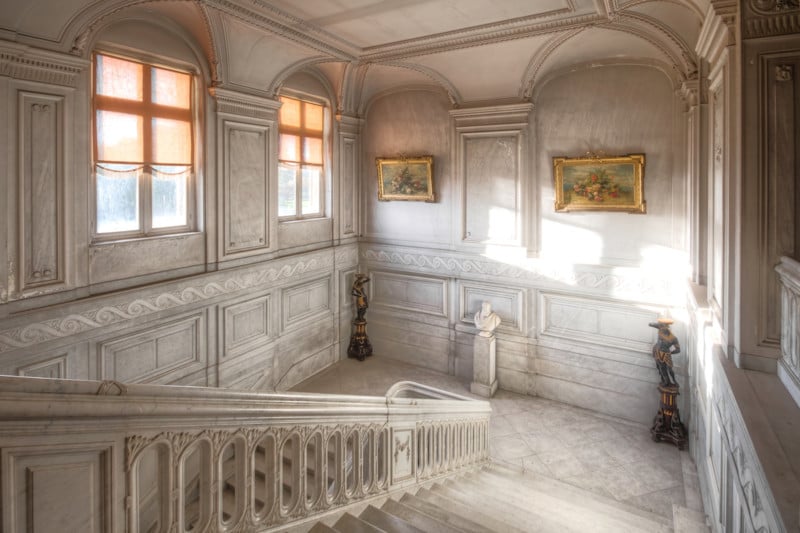 We tried to enter using the information we had gathered, but it didn’t work and we were losing valuable time since it was slowly getting light. We tried other entries, but failed horribly. I even crawled through narrow tunnels under the castle, nearly not being able to turn around. I remember being very disappointed walking back to the car. Can you imagine that?

Two other attempts followed on different nights and neither one of them was successful. But the fourth time was our lucky try. The entry we tried on the first attempt was somehow doable today and we were in!

We spend about two hours waiting in one of the rooms for the sun to come up, and started photographing. I loved it. It was everything I was looking forward to and more. The top floor was in a lot of decay but the other two floors were pristine (except for a lot of dust and cobwebs)—a beautiful contrast. 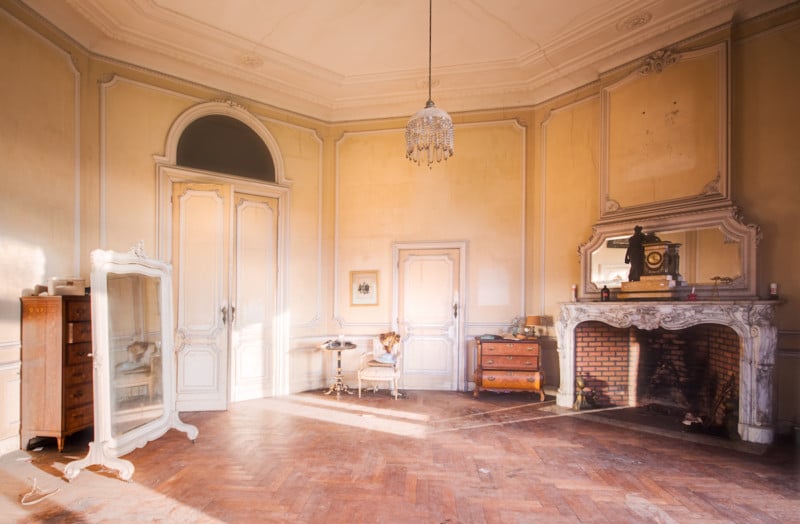 After exploring and photographing for about two and a half hours we heard a car circling the castle. We were aware of the fact that guards regularly checked the castle but we were quite sure that we got in unseen, and did not leave any tracks. We did not worry about it, and the car left.

However, within 15 minutes the car returned with a ladder in the back and the man driving the car and his partner got out. They took the ladder, pushed it against one of the closed windows and started breaking it open. I have never been so scared while exploring. The two men eventually got inside the castle. We could hear them talking French. We decided to hide in one of the rooms in a corner of the castle. One of the two men was getting closer. He was dragging something that sounded like an iron pipe over the floor and was making his way towards us. Was this a bad horror movie I was experiencing in real life?

The man was just around the corner when he peaked inside and started yelling with an aggressive tone. His partner soon joined him and they had their ‘weapons’ (read: sticks) ready to attack. One of the people in our group spoke French and tried to start a conversation. It took a couple of minutes till they calmed down, but they called the police nevertheless. After waiting for about thirty minutes for the police to come we left through the window the guards broke open. The police then offered to take us back to the car, which was very nice since it was parked away quite far.

They eventually wrote down our credentials and we could leave without any problems. Guess we were lucky.

The castle is located in a rather small town in Belgium named Moulbaix. It replaced a house and feudal fortress that were originally built on the property in 1502. Some of the remains of this fortress can still be found on the terrain. 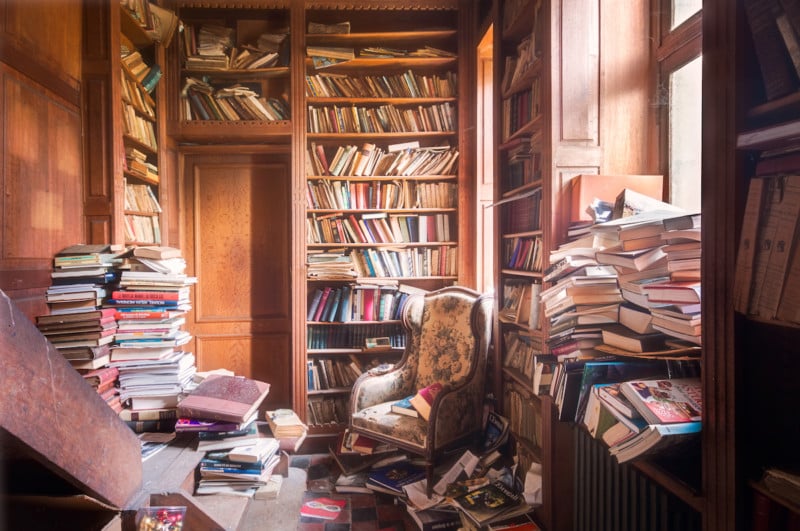 The castle was built in 1860 and is designed by the architect Désiré Athois Limbourg in Neo-Tudor style. Marquis Du Chasteler Oswald—a descendant of the ancient Hainault family—ordered the construction of this amazing place. The current castle has a rectangular shape and is flanked by four corner towers. On top of these towers is a fortification with four octagonal turrets.

The castle has around 340 windows and is surrounded by 62 acres of land with 2 acres of park designed by Louis Fuchs. 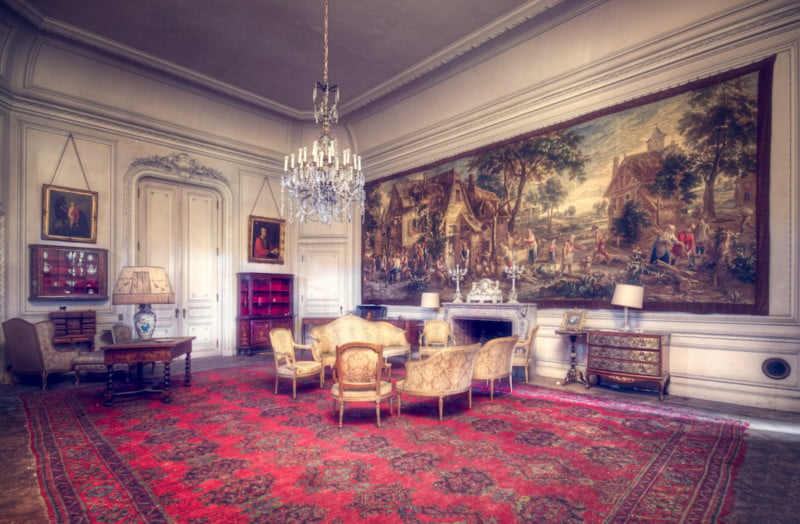 The story goes that the children could not agree over the heritage, which is why it has been abandoned for so long. Herman does not have plans to live in the castle but wants to restore it nevertheless. He mainly bought it for the land where he wants to extend his tree nursery. In the second part of the auction Herman also bought a windmill, houses, agricultural land and pastures (around 200 acres in total).

Herman bought the complete package (including the castle and its land) for about $4.000.000. 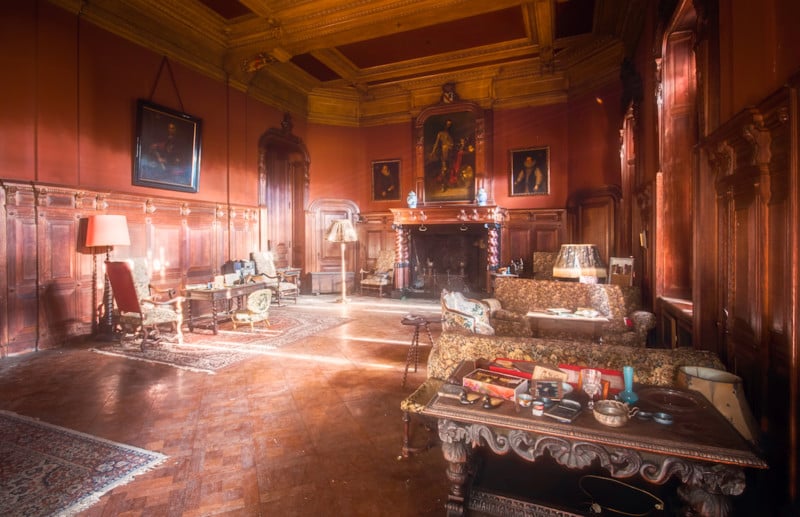