Capturing a solid rocket booster test on video is no small feat. You need a camera that can capture slow motion footage and handle the dynamic range between the booster and the booster plume. Fortunately, NASA now has this super camera in their arsenal!

Normal high speed video cameras can only shoot one frame at a time, but the HiDyRS-X records multiple high speed video exposures at the same time, making it possible to capture extreme detail in extreme slow motion.

So you can go from the blown out image up top to the highly detailed shot below: 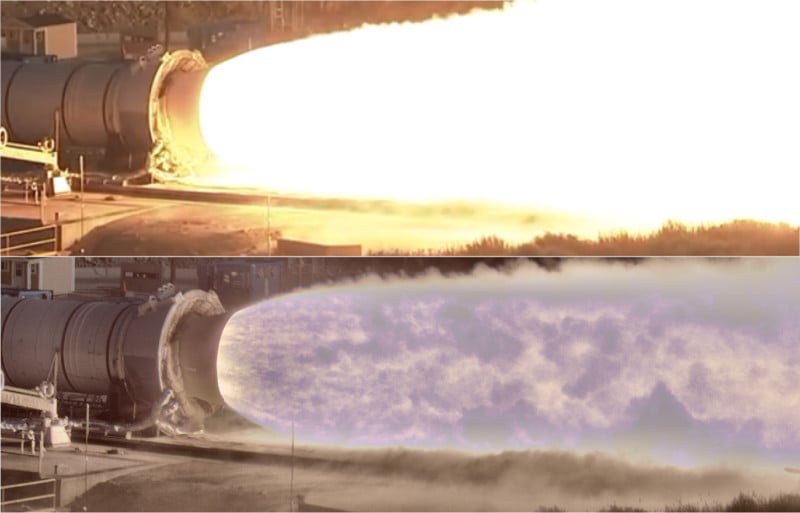 The camera was developed as part of NASA’s Game Changing Development Program:

“The HiDyRS-X project originated from a problem that exists when trying to film rocket motor tests,” explains NASA. “Rocket motor plumes, in addition to being extremely loud, are also extremely bright, making them difficult to record without drastically cutting down the exposure settings on the camera. Doing so, however, darkens the rest of the image, obscuring other important components on the motor.”

The HiDyRS-X gives researchers the best of both worlds, and this QM-2 booster test was the camera’s first real world dry-run. As for “how” the HiDyRS-X works, there’s not much info about that. A year-old memo from when the project was first moved into the Prototype stage says, “camera exposure will instead be controlled at the chip/pixel level and then integrated into a high-speed video camera.” That’s all we get.

However it works, the test footage is impressive to the extreme. In fact, the HiDiRS-X team says it captured things never before seen during a rocket booster test.

“I was amazed to see the ground support mirror bracket tumbling and the vortices shedding in the plume,” said principal investigator Howard Conyers. “I was [also] able to clearly see the exhaust plume, nozzle and the nozzle fabric go through its gimbaling patterns, which is an expected condition, but usually unobservable in slow motion or normal playback rates.”

The test didn’t go entirely smoothly. The camera’s automatic timer failed forcing the team to start the camera manually a few seconds after the booster ignited, and the booster shook the ground so hard it actually disconnected the camera’s power cable, turning it off after just a few seconds worth of recording.

Still, the results are beyond promising, and the next (even more powerful) version of the camera is already in the works. Check out the footage for yourself up top, and then read the full story behind the test at this link.