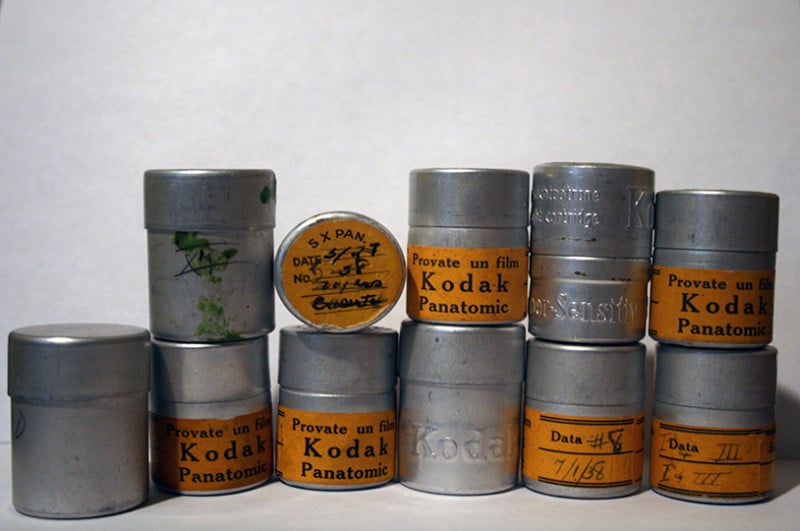 In 2013, I made by far my most amazing thrift store find. In the Good Samaritan shop in my hometown Roanoke, Virginia, I discovered several rolls of old nitrate negatives. The following day I had the negatives digitized and discovered the rolls contained a considerable trove of nearly 400 images, the majority of which had been shot in Italy about 80 years ago.

Determining the location of the photos was relatively easy: the architecture looked undeniably Italian and Mount Vesuvius loomed in the background. The date, March of 1938, was confirmed by several appearances of a world leader on his one and only known visit to Naples—Adolf Hitler. 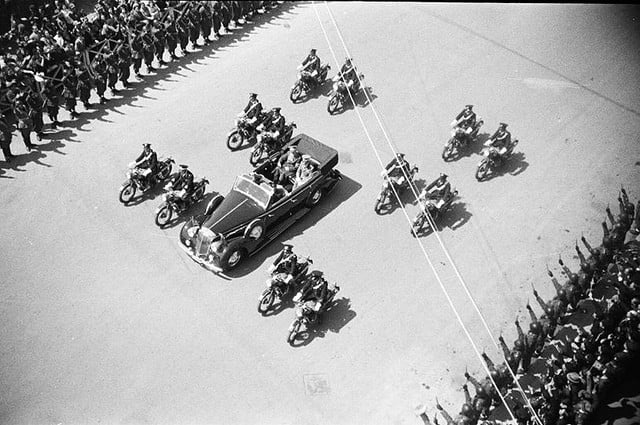 In 2014, thanks to an article published on PetaPixel, the photos went semi-viral. I made the local paper, the Mail Online declared “Hitler came on our honeymoon!”, and the story was translated into several languages. For a week or so, my discovery made things interesting, and my Flickr followers increased a zillionfold.

Despite all the media coverage and my own research, I made no progress in determining the source of the photographs, the photographer’s identity, or how the negatives had wound up in a thrift store in Roanoke. Several of the images, however, featured a pleasant-looking, young man in various locations around Naples. His appearance in enough of the photos led me to tentatively conclude he must be the primary photographer, the man who had toured Italy in 1938 and shot hundreds of photographs of his visit.

In July of 2016, I flew to Naples to follow the trail of this Ghost, with whom I shared a serendipitous connection and whose photos had traveled from Naples to Roanoke and now back to Naples. Having done practically nothing to prepare for my investigative work, I checked into the first hotel I walked past, accommodations with a business lounge vibe where I researched art galleries and made maps and lists to keep myself “on task.”

I kept wondering: What am I actually doing here? I am not really looking for a Ghost — my expectations could never reach such dramatic heights. In all honesty, I just wanted to set up a show of the prints in Italy. Although I had already exhibited the photos in Virginia, I thought Naples would be the perfect setting to explore more aspects of the images: memory, time, loss, history, media, connections, countries, knowledge, photography, and perhaps, more. I believe the medium isn’t the only message; if we do enough exploring, there’s something always beyond the actual photographic image.

Photography had brought me to Italy, and now, half drunk on Peroni and jet lagged in a business hotel, there I was hatching a scatter-brained plan. On the first full day of my visit, I woke up late and walked to Largo Barachee, an arts collective that seemed to hold some promise or so I had thought when I’d come across it during my research the night before. Finding the address, a concrete square off Via Toledo in the most densely populated part of Naples, was easy. But all I saw was a busy city neighborhood: a lively restaurant, a broken down car full of garbage, some street art, an old man in a doorway, and a pug dog kicking around a piece of wood.

I asked a few people where the actual Largo Barachee art gallery might be located. “Largo Barachee qui!” “The gallery?” “Qui, qui!” I stood around realizing maybe there is no office for this neighborhood arts movement, no beautiful woman behind a white, interestingly designed Italian desk, someone whom I could ask, “Hey, wanna be in my vague arts project?” Way too easily, I surrendered, deciding to raise my spirits with several Camparis.

I walked to Via Partenope, the street I’d determined through previous research was the location of many of the photos taken by the Ghost. Back in the US, I’d visited this street virtually but intensely, triangulating locations with Google Maps, Street View, old photos, newspaper clippings, etc. Here, laid out before me, was the story created by the Ghost and me—there was Ovo Castle, Villa Comunale, the Statue of Umberto I. 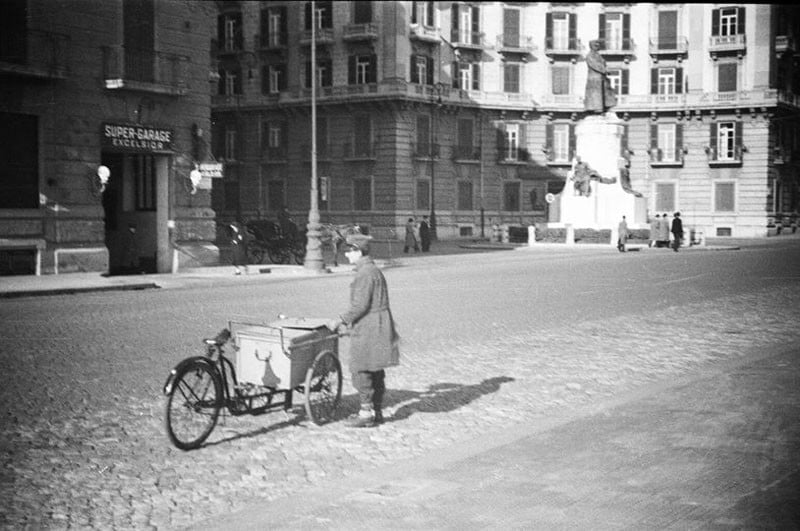 It was all too easy finding these places. I told myself it must be the Campari properly lubricating my psyche and making me float as if through a dream. But really, I’d done all the ground work two years prior.

I can’t decide what this experience was exactly like. Maybe I was too cool and rational, as though I were checking off a list of the locations I encountered. It was a bit like walking onto the set of an old movie you’d watched once or twice. You glance around remembering pieces of the story: that’s where Hitler’s car was, that’s where the Ghost took the photo in the window, that’s where the goats pulled the wagon, that’s where the giant Heil Hitler sign was located. 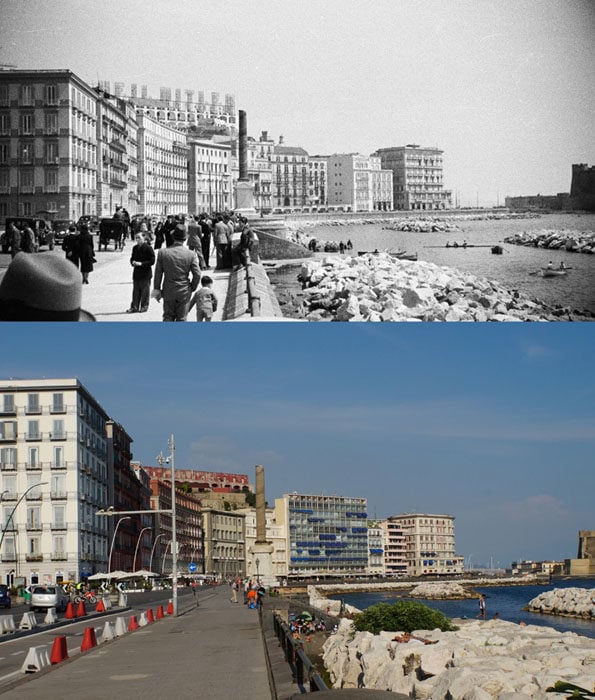 I grabbed a Peroni from a street vendor and had a smoke on a ledge near the water, trying to soak things in. Before the trip I had put together a portfolio of some of the photographs to easily share with people; so I walked over and showed the pictures to a woman sitting behind her street vendor stall. She didn’t speak English; so it took a few moments for her to piece together what she was looking at. Eventually, she invited other people over, motioned for me to sit, and pointed in the direction of the photos’ locations. A man in the group ran over to his car and returned with a photograph of himself with Sophia Loren. 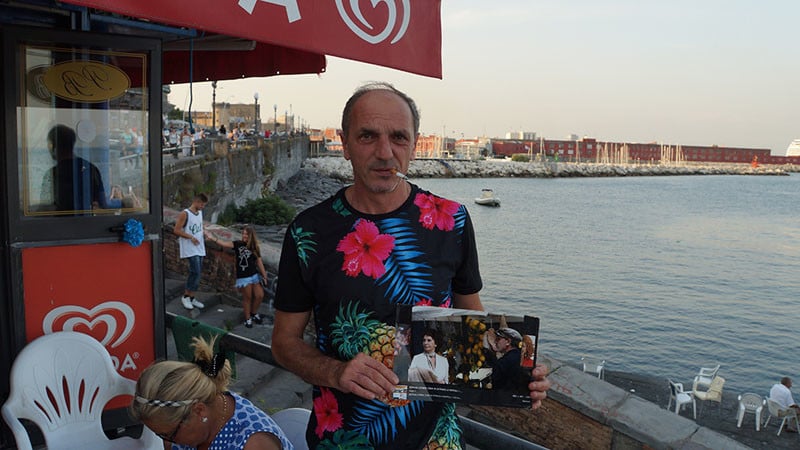 They fed me, gave me wine, and told me, “You’re a good man.” As I walked home drunk and sweaty, I realized I’m here for Napoli, the photos are simply a vehicle.

The next morning I woke up and walked down Via Duomo looking for a church in one of the Ghost’s collection of photographs. I had an address and a map, there were churches everywhere, but this one was nowhere to be found. I approached a man in the doorway of another church and showed him a photo of what I was looking for. “This church is not on Duomo. There are no beautiful gardens here. This church isn’t even Napoli.”

After realizing I had totally screwed up my project for the morning, I walked to Dante Plaza, lined with book shops and antique dealers. In my browsing I stumbled upon a trunk full of old black and white photographs of Naples. 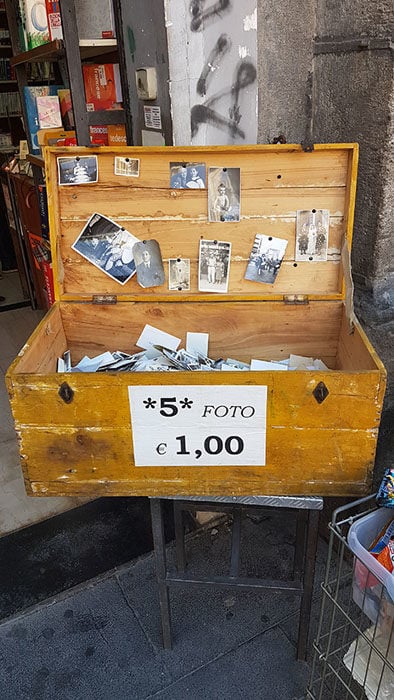 I thought: al of Italy is found photography, piles of history, artifacts waiting to be uncovered, explored, investigated, researched. My find barely registers in this fantastic heap of life. Mind you, this realization was fine with me. I was in Naples, walking streets with dignified men and beautiful women, finding fantastical street art, visiting museums and bookshops. I discovered Mimmo Jodice, the great Naples photographer, Cherubino Gambardella, Emilio Isgrò, Tomaso Bingna.

I spend my last full day in Italy at Pompeii with an Australian woman with an easy laugh. We have fun but Pompeii is a massive, sweltering, mysterious, impenetrable edifice . We get lost in its ancient streets, pushed through the Lupanari, I humor myself by thinking about a psychogeography of Pompeii and take a bunch of crappy photos. The Ghost had taken photos here but I’ve completely forgotten about that now.

One of the great powers of photography is its ability to allow people to travel through time and great distances. Because photography has this power we can use it to tell stories, make sense of things, see how our world has changed. My last night in Naples I returned to the street vendor stall to visit my new friends. That night I sat around having broken conversations with people while a group copied the Ghost’s photos with their smart phones. 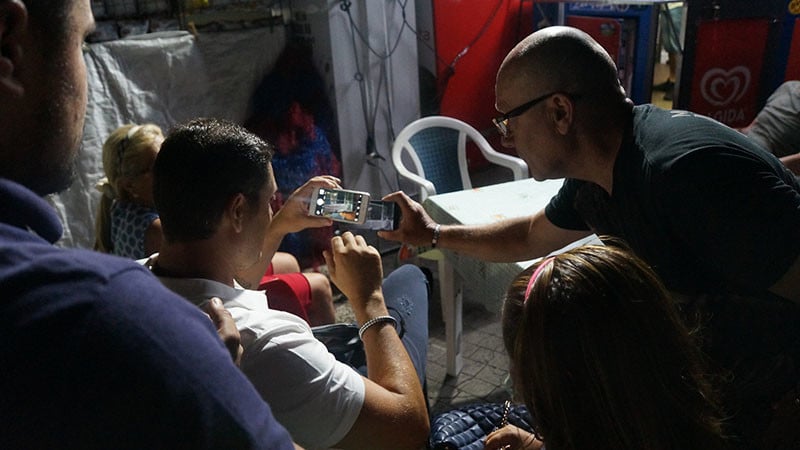 About the author: Matt Ames is a lover of photography based in Roanoke, Virginia. You can find his work on Flickr.