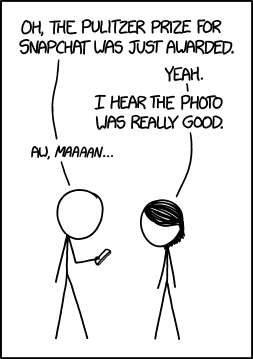 xkcd just published this simple comic that pokes fun at the brief existences of Snapchat photos (if you’ve never used it before, the service is built around the idea of self-destructing snapshots). The alt text of the comic reads: “For obvious reasons, the prize is awarded at a different time of year from the others, while it’s still fresh in the committee’s memory.”

Why I Ditch Extra Gear and Travel Light as a Photographer