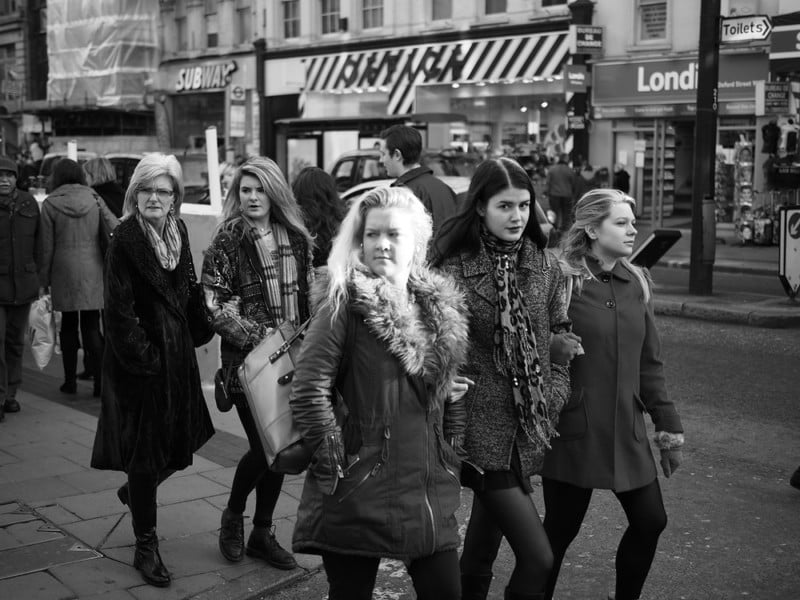 I have for quite a long time tried to put on paper my honest and more recent thoughts on street photography and my views on the attitude some opt for.

Street photography in the way it’s practiced can sometimes have a less attractive side, often displayed by photographers through a lack of empathy with their subject, a lack of respect and justifying their actions in a way or another, usually by stating street photography is not illegal so it’s alright.

Well I’m sure we can think of a few “legal” things that aren’t really acceptable.

The other morning I watched a video relating to street photography on YouTube in which a street photographer explained how to limit the risk of getting beaten up after he himself got beat-up.

Hindsight is a beautiful thing but in reality it doesn’t take a street photography master genius to understand his approach was aggressive and was only ever going to yield an aggressive reaction from his subjects.

In short, the guy ran across the street towards a group of friends and shoved his big camera and flash in their faces. They then proceeded to beat the crap out of him.

I’m not saying he deserved to get beaten up, but I’m not surprised either (you’d know if you’ve ever spent a night in Glasgow). 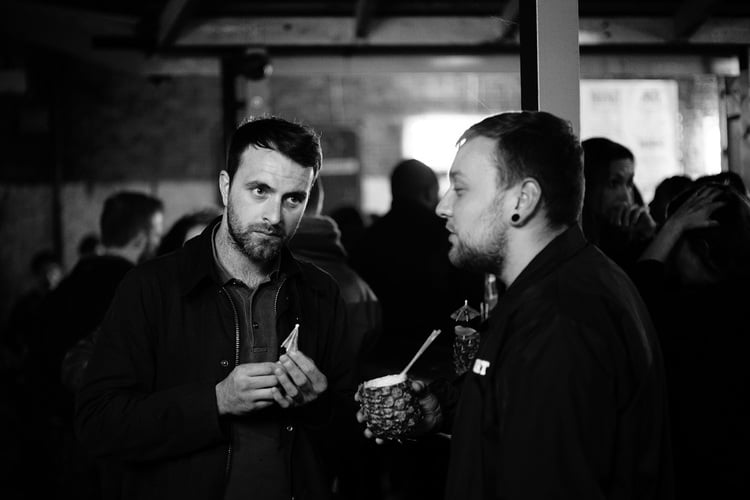 I think it’s important to question your work and how you go about it once in a while, call it a reality check. It’s the best way to improve.

So recently I have been looking at my own street photography, or some of the shots I got. I’ve been feeling like it’s not always been as honest as I wish it’d been. Street photographers need to sometimes stop and rethink their whole approach. At least pause and look at their approach as it’s easy to get too carried away chasing the shots over and over again.

I have never been one to shoot the homeless, harass someone shooting 40 photos of them through a coffee shop window or one to use a flash and fire it in people’s faces without notice. It’s just not something I can relate to. I would hope people who know me describe me as a caring guy, not one who takes pleasure or gets a rush at pissing people off.

The way I carefully choose what to photograph, for what it’s worth, can be broken down into a few simple rules, which I have to honestly admit, were occasionally broken but generally adhered to. 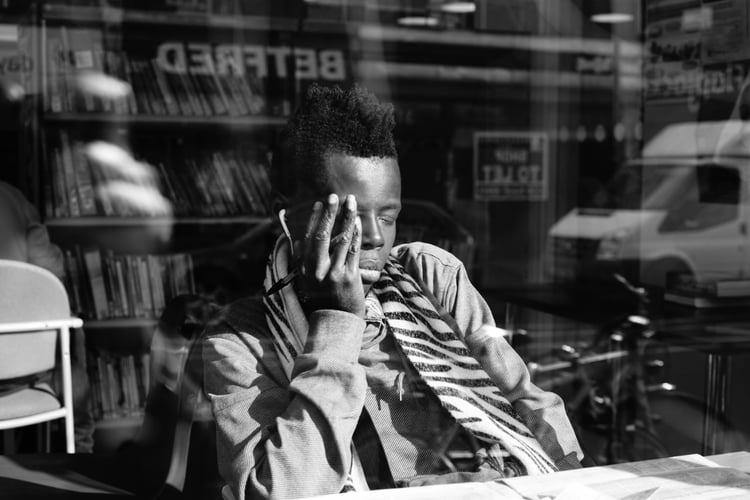 Gut Feeling and Being Streetwise

First, I always assess my environment and the person I’m about to shoot. It helped me develop some kind of permanent street radar.

I have spent enough time in very dodgy places in my twenties to know who is likely to punch me. It’s worth taking a split second more to look around. You may lose your shot but you may keep your teeth — the choice is yours on this one.

It can pretty much be summed up by asking yourself: “How would I feel in this person’s shoes?”

This simple question can change everything and I think is the most important in my eyes.

The issue is, if you’re born a total jerk, your judgement is horrible anyway so asking that question will not result in anything good for you. Actually, chances are you may not even finish reading this article.

So I try not to shoot people who are obviously weak or particularly vulnerable. My reasoning behind that is that they were not necessarily like that all their life and may not feel comfortable with their image today.

I sometimes imagine my grand-mother who passed away two years ago at the age of 96. How would I react if a stranger came one meter from her and took her photo without asking to then disappear forever? I’d be furious because I’d know it made her feel uncomfortable, maybe scared/violated even.

And that’s where some will think: “Who cares?”

I have to be honest though and admit that I have on occasions taken photos of old people, but I really try my best to take ones which aren’t degrading. It’s a very fine line.

Take the three ladies below on a Sunday outing to the pub. Some may say it’s not street photography, it’s a street portrait. Whatever.

I gave them a smile and told them they looked fabulous, they smiled back and I took the shot. 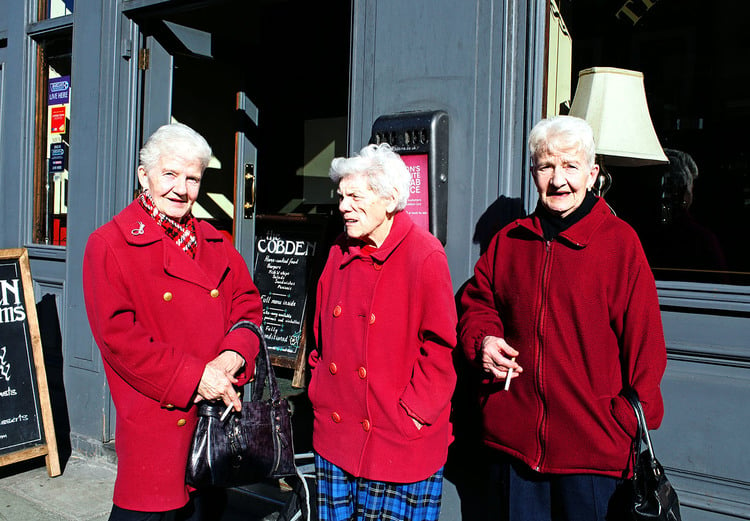 I have no interest in showing people at their worst so hopefully any of my subjects would look at their photo thinking “Hey… I look pretty bad ass!” or “I want that photo”. Take this man for example in the photo above. Can you believe he is 80? I think he looks pretty cool.

If you can calculate the odds of what I’m about to explain then please tell me! Note that 8.6 million people live in London.

At the end of 2014 / early 2015, I had a three-month exhibition for the opening of the hip Hoxton Hotel in Holborn, London. It was called “The Great Londoners“.

Against all odds, his daughter saw the photo I took of her dad at the exhibition and got in touch with me. She explained in her email that her and her sister absolutely loved the photo. Her dad even brought some mates of his to my exhibition, essentially to show off his newly acquired celebrity status.

Furthermore she is now the proud owner of that photo. Something similar happened when I photographed the young woman in the shot above.

I was in a pub having a pint and she looked at the menu across the window. I focused and at that exact moment she looked at me and I took the shot. She looked a bit confused immediately after I did, so I gave her a smile and showed her the LCD display through the window of the shot I took.

Believe it or not, a friend of hers found that photo on my Instagram and she got in touch. It’s a small world indeed.

I think she looks great and for that reason I have no regrets taking the shot and showing it, plus a smile goes a very long way. 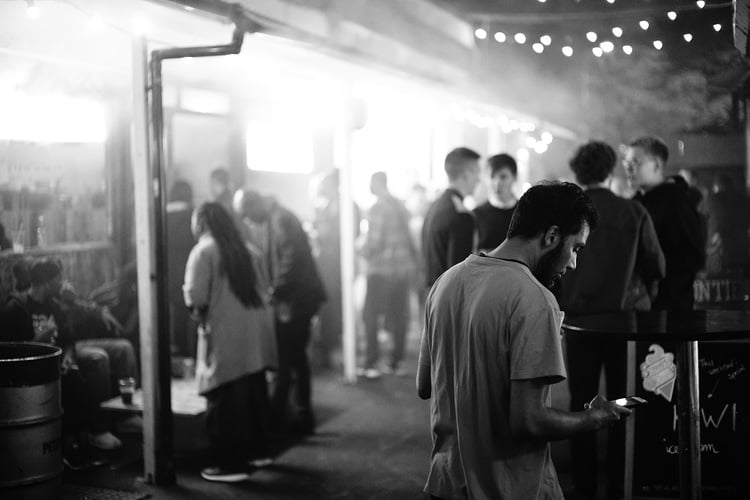 If your aim is to not get noticed, don’t get noticed. But if you do, don’t walk away or act weird.

The other day. I was walking with my wife on London’s South Bank which could be compared to a nature reserve where street photographers roam free. Seriously, they are everywhere!

We were walking and that guy (who of course I saw coming from a mile away) with his camera at hip level angled towards us, took the shot. Suddenly I was in the shoes of people I normally shoot and it turned into a bizarre role-reversing eye opener.

The feeling that, actually, shooting people trying to not to be noticed is sort of acceptable I guess but when you do get caught, try to interact with people or smile or anything I don’t know, do a funny dance… but don’t walk away like a creep who stole a shot. 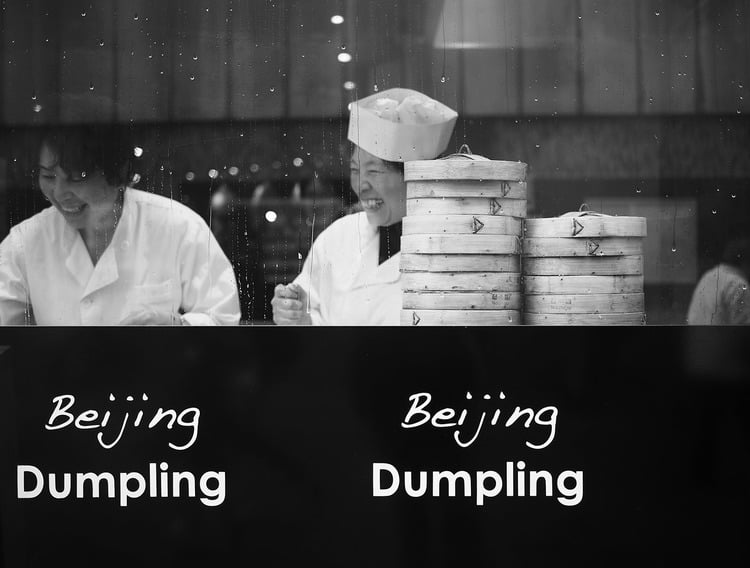 From reading this you probably guessed that I am in a phase where I am seriously questioning how I want to be shooting street photography in the future and I want to make better decisions when it comes to choosing who and how I shoot. There’s always room for improvement in anyone’s photography.

I have grown tired of hearing some street photographers I know brag about how they stayed in front of a coffee shop window taking 40 shots of that guy drinking his coffee who in the selected shot looks, understandably, pretty pissed off. It’s harassment, pure and simple.

I get bored of seeing street photos captured with a flash right in people’s faces, Bruce Gilden style, I just don’t like them.

There’s a lot of street photography out there which I don’t enjoy. Some of course is just not very good or interesting but at least it’s harmless.

I find a lot of street photography today quite dishonest, creepy and a bit disgusting and I won’t be a part of it.

Of course I can’t change how and what others shoot but I can make sure I stick with my principles.

About the author: Nicholas Goodden is a London-based photographer specializing in urban photography, street photography, and micro video content such as cinemagraphs and timelapse. The opinions expressed in this article are solely those of the author. You can see his work on his website or by following him on Facebook, Instagram, and here.

Fisherman Catches Nikon DSLR Lost by Photojournalist Who Was Attacked