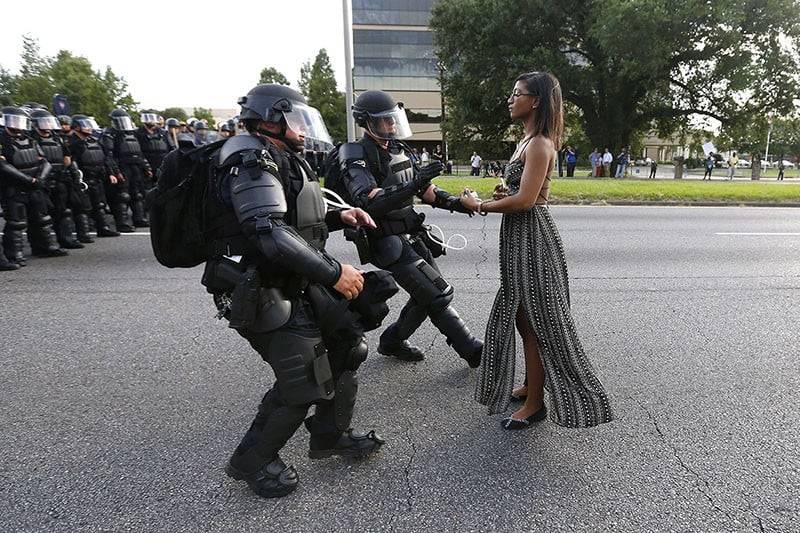 Amidst a barrage of violent imagery in the past week graphically illustrating the deaths of Alton Sterling, Philando Castile, and five Dallas police officers, Jonathan Bachman’s image of a protest in Baton Rouge has emerged as iconic.

It’s already being compared to some of the best civil protest images of the 20th century, and shows stoic defiance in the form of nurse Ieshia Evans clad in a flowing dress as she’s detained by a militarized police.

The image has been covered in Buzzfeed, Time, The Atlantic, and been reposted by numerous celebrities. Writer/Photographer Michael David Murphy penned a detailed analysis of the visual elements in the photo. To say it’s struck a chord would be an understatement.

The characteristics of the still image make it both successful and contextually ambiguous. As Pulitzer Prize-winning photographer Eddie Adams stated, “Still photographs are the most powerful weapons in the world. People believe them; but photographs do lie, even without manipulation.”

From merely looking at the photo, we don’t know why she was being arrested (she was blocking a public road), why the police are in full riot gear (the protest was two days after the Dallas shooting), and whether she was forcibly detained and removed (she was not). But none of these details seem to alter the strength of the image as both a visual record, and an artful and defiant message.

I reached out to a number of veteran photo editors to get an insider’s take on what makes the image iconic. Below are their words:

For storytelling to be considered great, one of the all-time best writers, Stephen King, says the story must contain two things: drama and empathy. I thought about that upon seeing Jonathan Bachman’s image from Baton Rouge. By its very nature, it’s a dramatic image — it’s a dramatic moment. But it’s also an image that captures so much human experience in one instant that it elicits an immediate emotional response.

Bachman’s picture delivers this experience in a few ways: First, the juxtaposition of Ieshia Evans’s graceful, almost ballerina like posture standing in a billowing summer dress with no armor and a calm expression and the heavily armed, military-like look and movement of the police in riot gear. It’s impossible not to feel moved by that contrast. Second, there’s incredible tension created between the two sides of the frame as well, with the left half of the frame weighted by the dark uniforms of the police and the right side of the frame light and relatively open. And third, it’s a very clean frame with the key action directly in the center…so we are drawn right to it, right into it.

There is so much in this photo for the viewer to connect with and to see meaning in, to see a metaphor in, to see a story and a dynamic that has been repeated for ages in, whether Bachman intended for that or not. It is a remarkable, respectful, sensitive capture of an extraordinary moment and one that has earned the ‘iconic’ label so many are assigning it.

Griffin is a former photo editor for Esquire. 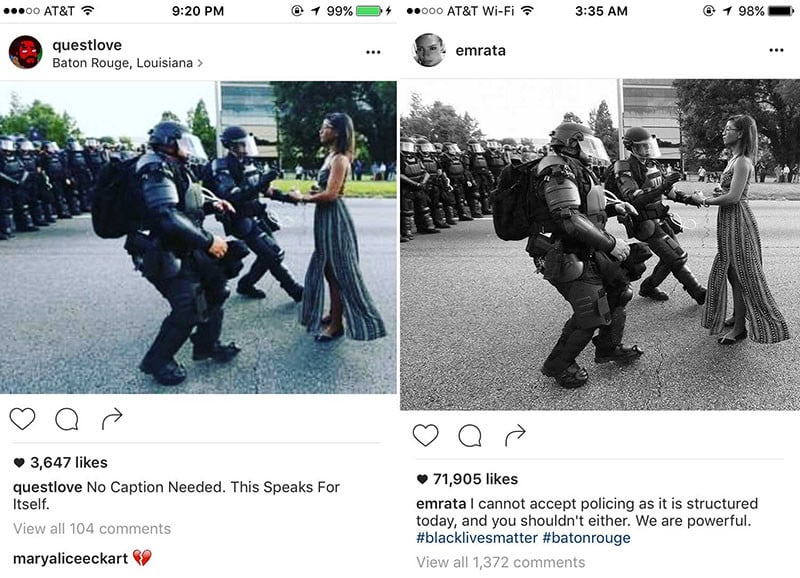 The riot-gear clad officers are seemingly taken aback by the lone woman, both beautiful and defiant at the same moment, halting them in their tracks. The phalanx of officers at the left of the frame amplify the apparent absurdity of over-reaction. Our nation is in turmoil over the recent shootings, we are inundated with the same protest images and photography that seems to take sides, not entirely true to the tenets of photojournalism.

Like the Tank man image of Tiananmen Square a generation ago, this image shows singular defiance to the authorities perceived as unjust. At The AP, we used to say, “send the one best image.” Jonathan Bachman nailed it.

Solimano is a creative consultant and former AP photo editor and photographer.

The body language says it all. They are combatants. She is femininity. They are prepared for brutality. She embodies serenity. She stands tall, dignified, composed and at peace, facing what could have been, but thankfully was not, a very physical encounter. She embodies the peaceful resistance of Dr. Martin Luther King and Mahatma Gandhi; she bears the stylish grace of a Raphael painting or a statue by Michelangelo. It is a contradiction of both time and space.

It has been said that history rhymes rather than repeats. This image speaks to our informed visual subconscious and draws upon so of the many of the works of art whose common themes come to mind. In our worst nightmares the barbarians at the gate have come for the women and children, and by their sheer numbers and overwhelming strength we are powerless to resist. Images such as this one speak to our fears and force us to contemplate how we could have allowed ourselves to come to this place. We have no good answer and are ashamed.

Winslow is the editor of News Photographer magazine, and former photo editor for Reuters.

The first thing we see is her stance—strong, solid, unblinking—firmly rooted to the ground. She owns the space around her. There is nothing to distract us from her. She faces the soldiers (because that is what they are) in a dress, vulnerable. They are fully covered in armor. The two who have approached her are off-kilter, as if the power of her has rocked them back on their heels.

To the left you see the wall of soldiers, adding to the sense that she is alone, that she waits for the inevitable arrest. She doesn’t move, offering herself without resistance. That makes it harder to understand why she is about to be arrested. She has done nothing.

I see the jagged crack in the asphalt dividing the line between them. Her and Them. She is the man in front of the tanks in Tiananmen Square, the woman alone facing the crowd of Neo-Nazis in Sweden. She makes us question ourselves and what we are prepared to do. Do we have the courage she has?

Someone called this photo “Princess Leia and the Stormtroopers.” That connection to our shared experience makes a cultural touchstone of this photo and makes it unforgettable.

Kramer is a creative consultant and Pulitzer Prize-winning former photo editor for The New York Times.

Whether or not Bachman’s image is elevated into the pantheon of truly historic images remains to be seen. It is, at the very least, an incredible record of a troubled moment in our country’s history of race relations, police distrust, and the power of still photography.

Author’s note: The responses in this article have been edited and condensed.

FStop is a Tinder-esque App for Pairing Models with Photographers