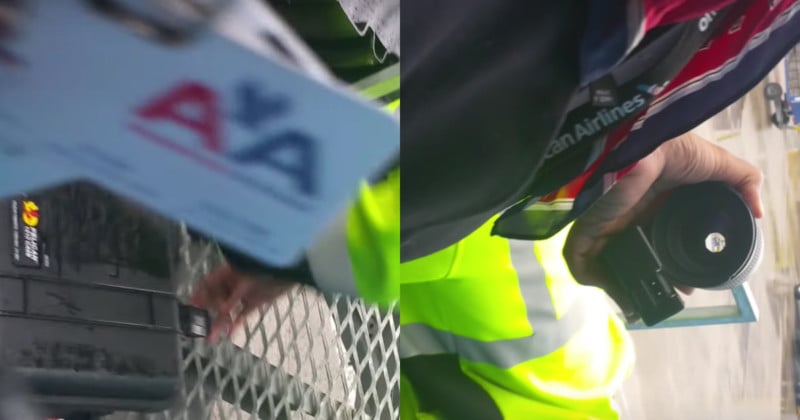 Imagine getting off a flight, walking over to get your (unwillingly) gate-checked case full of $20K of camera gear, and seeing a baggage handler walking up holding a few lenses and yelling “whose are these?” That’s exactly what happened to photographer Yosef Shidler of CJ Studios.

The incident took place on June 5th while Shidler was traveling to Detroit to cover a wedding. After being forced to gate-check his Pelican case, he walked out onto the ramp to see his case open and gear everywhere. “All of a sudden, the lady walks out holding on to my lenses asking ‘whose are these?'” he told us over the phone. “I was like ‘What the hell!?’ It’s unbelievable.”

Shidler claims his Pelican case was dropped from the loading ramp as it ascended, from a height of “about 7 or 8 feet.” The case burst open and camera bodies and lenses went rolling around on the tarmac. The story is going viral today thanks to a video Shidler captured immediately after the incident took place:

We reached out to Shidler when we saw the video to find out what happened, and what has happened since. According to him, the damage is very serious. “We’re talking about thousands of dollars in damage,” he told us. “Broken lenses, a couple of broken mounts, and everything is scratched up. Weeks without my gear.”

Shidler explained as much in the video’s description as well, saying he had to borrow a camera from a friend in order to capture the wedding he had come to Detroit to shoot. It’s the height of wedding season for his company, and when we spoke to him he told us that they’re shooting as many as 12 weddings per week. This is not when you want to find your gear has been destroyed.

After the video ended, Shidler continued recording audio, which he sent to us as well. From the counter at the gate he’s directed to the baggage services office, where he files a complaint. He’s told his concern has been “noted” in their system but that they can’t print out a copy of the complaint itself, making it all the more frustrating when he received the following email reply when he reached out to American Airlines from home:

I’m sorry, I was unable to locate an active Property Irregularity Report based on the information provided. If you have not filed a report with us please contact our office as soon as possible to have a courtesy file created.

For now, that’s where this story has stalled. He’s filed an official claim, but has yet to hear back from American. From what we heard in the video and audio recordings, as well as our brief conversation with Mr. Shidler, we have no doubt he’d be willing to take this to court if the matter isn’t settled properly.

When we reached out to Mr. Shidler, he told us he was glad the video was going viral and the story was taking off. He feels photographers need to know about this, and American Airlines (or any airline for that matter) needs to take stories like this seriously.

“Every wedding hall we’re shooting in is asking to see our insurance. I have to have millions in liability insurance in case I knock something over and damage the building,” he told us over the phone, incredulous. “But an airline can damage $20,000 worth of gear and tell me to ‘call us about it and file a claim!?’ It’s unbelievable.”