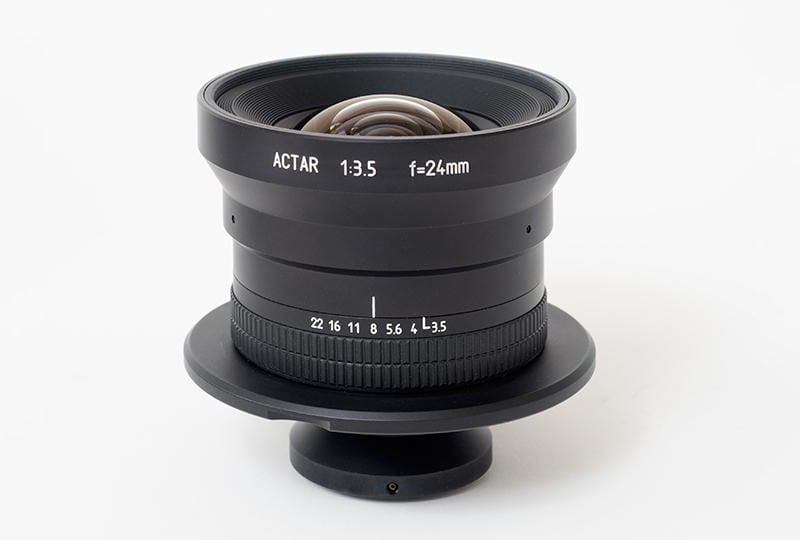 The compact Cambo Actus view camera is popular among photographers using Sony A7 series cameras. Clyde Butcher migrated from large format film to an Actus and Sony a7R. Admittedly, I am an oddball photographer: I use the Actus with an Olympus Micro Four Thirds (MFT) camera.


I love the Actus/Oly combo. My lens kit consists of enlarger lenses (ELs) ranging from WA 60mm to 135mm. For my style of photography, the ELs are great. A disadvantage to using an Actus with a MFT camera is the focal length doubling factor—meaning a 60mm lens is the equivalent of a 120mm lens on a 35mm camera. Until the Actar 24mm f/3.5 came along, the Actus lacked practical options for lenses shorter than 45mm.

After seeing Cambo’s press release on the Actar, I called Steve Hendrix at Capture Integration to inquire about availability. The lenses hadn’t yet arrived in the US, but Steve assured I would be able to rent one. About a month later, the Actars arrived. As promised, Steve followed up. Shortly thereafter, the lens arrived via UPS.

The lens barrel and dedicated lensplate are metal. The manual aperture ring, clad in hard synthetic rubber, is easy to grip. The ring rotates smoothly, although it requires a bit more torque than most lenses of comparable size. The ring offers decent tactile feedback in half-stop increments. Together the lens and lensplate weigh in just shy of 1.5 pounds—not bad. The front filter thread is 82mm. With the Olympus E-M5 II 16 MP sensor, the Actar’s sweet spot is f/8. Diffraction kicks in at f/11 and f/16 gets ugly. The Actar delivers dead on sharp results across the range of +/- 15mm shifts and +/- 20mm rise/fall. The lens exhibits virtually no linear distortion, and I’ve yet to encounter CA issues

I photographed the condo building with the Actar. I shot two frames—shifted 6 mm apart. I raised the back standard 8mm and tilted the front standard just a smidge to keep the foreground in sharp focus. The two frames merged seamlessly. It’s a pleasure not having to bother using a rail, as is the case with tilt/shift lenses, to compensate for parallax.

Of course, stitching two frames is no big deal. So I decided to evaluate the Actar’s sharpness, contrast, linearity, and falloff characteristics by seeing how well it would perform with aggressive rise/fall and tilt/shift adjustments. I chose an electric utility substation for a test subject. From the time I arrived at the site, scouted the best vantage point, set up the tripod, and framed up the shot, the light began to wane.

I took twelve pictures—three rows of four frames (1/60″, f/8, ISO 200). The shoot went quickly. The span of the shift along the rear standard came to 32mm (one shot every 8 millimeters), and the span along the rise/fall came in at 15mm (5mm increments per row). I tilted the front standard by less than a millimeter to bring the foreground into focus.

I batch processed the twelve RAW files in ACR. I saved them as TIFFs—native resolution 12.8″ X 9.6″ at 360 DPI. Being that the light was less than optimal at the time of the shoot, I cranked the vibrance and upped the clarity. The TIFFs exhibit a slight greenish cast. I attribute that partially to operator error; I neglected to capture a reference frame with a color checker card. I cannot eliminate the possibility that the Actar and the E-M5 II sensor have something to do with the green cast. Regardless, color correction is a simple matter to adjust in the RAW developer.

I used photomerge in Photoshop CS6 to stitch four frames together for each row. Merging the three rows went quickly. Admittedly, I did not expect such a high degree of precision from the Oly/Actus/Actar setup. There are no signs of geometric distortion and CA is virtually nonexistent.

The lens performed well beyond my expectation. It easily out-resolves the Oly’s 16 MP MFT sensor. The Actar’s fit and finish is simple, clean, and robust. CA is extremely well managed. As advertised, this lens exhibits virtually zero geometric distortion.
The Actar’s only nasty attribute is its susceptibility to flare.

The Actar 24mm f/3.5 lens certainly fills a gap; it broadens the overall appeal and usability of the Actus system. Despite its susceptibility to flare, it is a fine performer. There are rumors aplenty that the Actar is a stripped-down version of the Samyang 24mm tilt/shift lens. The similarities are undeniable. Frankly, I could care less. With an MSRP of $1,500, the lens is priced fairly. The Actar and the Actus make a fine couple.

I bought the lens, and CI applied the rental fee towards the purchase — money well spent.

The reviewer did not receive monetary or other forms of compensation from manufacturers or VARs.

About the author: Bob Rosinsky is a retired commercial photographer and educator. He lives in Florida, a few miles inland from the Gulf of Mexico. He enjoys photographing the seacoast and gas stations at night.

Equipment, Reviews
bobrosinsky, lens, review
Related Articles
Discussion
Trending Articles
Photographer Captures the Many Colors of the Full Moon Over 10 Years
May 25, 2022
Photographer Teaches Posing to Prove Anyone Can Be Photogenic
23 hours ago
10 Best Free Online Photography Courses in 2022
May 25, 2022
The Kodak Ektar H35 Shoots Two Photos Per Frame of 35mm Film
May 26, 2022
Nikon Plans to Basically Abandon DSLRs by 2025
24 hours ago