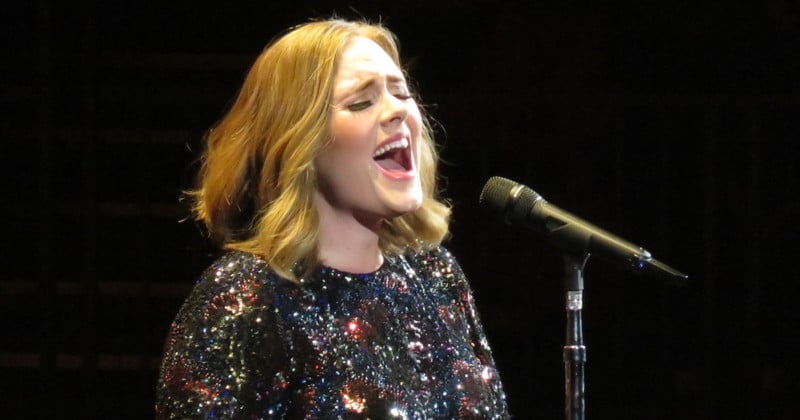 Many of of us have done it: rather than enjoying that amazing concert or live event you’re at, you pull out your camera and end up watching most of it through the LCD screen. Well, pop star Adele ain’t havin’ it, especially if you go so far as to set up a tripod.

The singer-songwriter is making headlines today after she was recorded (*insert irony here*) telling off a woman in the crowd at this weekend’s show in Verona, Italy. “Can you stop filming me with a video camera, because I’m really here in real life,” she says. “You can enjoy it in real life, rather than through your camera.”

You can see the full moment (twice) in the video below:

Obviously there were a lot of cameras out filming/photographing the show and this interchange, but it seems the thing that upset the pop star wasn’t so much that someone was filming her, it was that the woman in question had supposedly set up a tripod in the front row of the show.

“Can you take your tripod down?” you hear Adele say towards the end of the video, visibly upset. “This isn’t a DVD. This is a real show.”

Both comments were met with cheers from the crowd, but while most people seem to be on the pop star’s side, a few responses like this (and harsher) did crop up online:

another side thinks you shouldn't set up a damn tri-pod at someones gig. There's definitely a difference between that & iPhone footage.

just saw the thing about adele telling a fan to stop recording her show… the woman needs to get a grip.

Of course, this isn’t the first (and won’t be the last) time a musician has called out a fan publicly for taking pictures or recording video. Beyonce once told a fan to “put that damn camera down” and Ryan Adams yelled at a fan for using flash and triggering a serious medical reaction.

In the end, unless you’re shooting the show professionally, it may be safer to just leave the camera in your bag… and DEFINITELY don’t set up a tripod. Public shaming is no fun.

Confessions of a Newbie: Business Advice I Wish I’d Known

InstantFlex TL70 2.0: The Future is Bright for Instax Photography