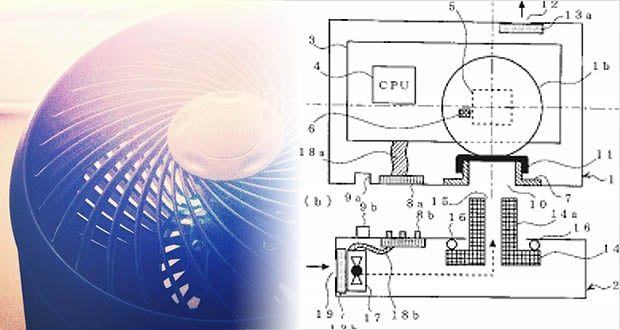 Forget DIY camera mods for keeping your sensor cool: Nikon has a much fancier solution. A recently published patent by the company (No. 2012-198447) shows a camera attachment that’s specifically designed to prevent sensors from overheating. It attaches to the bottom of the camera and blows cool air into the body through the tripod mount underneath. If computers have dedicated cooling fans, why can’t compact cameras?


A diagram in the patent shows how the airflow is supposed to work. Air is sucked into the battery grip-style attachment by the tiny fan inside and then delivered up into the camera through the mount. Once it passes over the sensor, the hot air is pushed out through the exhaust outlet, which just so happens to be the speaker holes.

Having a dedicated accessory provide cooling rather than building a fan into the camera itself is a pretty smart move. You can leave the accessory in your drawer during the winter or if you don’t do anything that puts a strain on the sensor (e.g. extended HD video recording). The company just needs to make sure that the openings are sealed well when the attachment isn’t being used — compact camera sensors attract enough dust as is.

Image credit: The fan of life by Gavin St. Ours