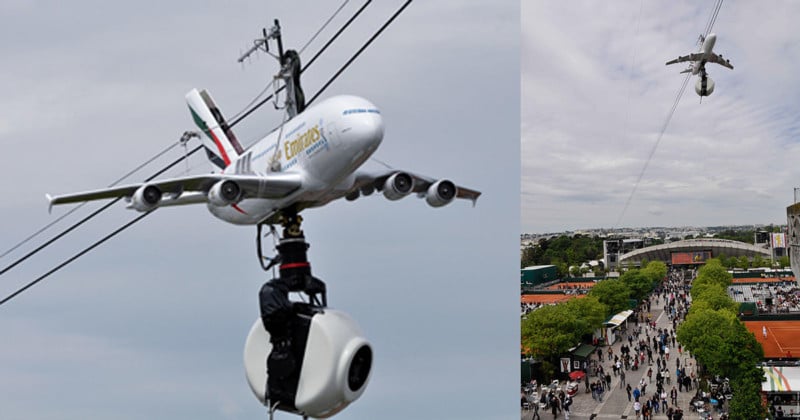 The airline Emirates is a sponsor of the French Open championship in tennis, and one of its advertisements at the tennis matches is an aerial camera in the shape of an Airbus A380.

Suspended 45 meters (~148 feet) above the ground, the camera is a large model of an Emirates A380 with a camera dangling from the belly. It travels along a 350-meter cable throughout the tournament grounds. Made of fiberglass and polyurethane over the course of 2 months, the near-exact replica weighs 60kg (~132lbs) and measures 2.8 meters (~9.2 feet) long.

Emirates first deployed the camera at the French Open back in 2013. Last year, the camera freaked out spectators after zipping by overhead and casting the shadow on the court of an airplane flying backwards…

Can someone explain to me why the plane shadow is going backwards???#FrenchOpen pic.twitter.com/skYtg9YfrN

The camera also confused tennis fans watching from home when it was spotted flying backwards on the TV broadcast:

Did anybody just see the backwards flying plane at the tennis?! Wtf #FrenchOpen pic.twitter.com/sMtjeSVWQd

The marketing gurus working for Emirates succeeded in attracting attention with this strange camera, and we’re guessing they’ve gotten some nice aerial images of the tournament as well.

(via Emirates via Gizmodo)