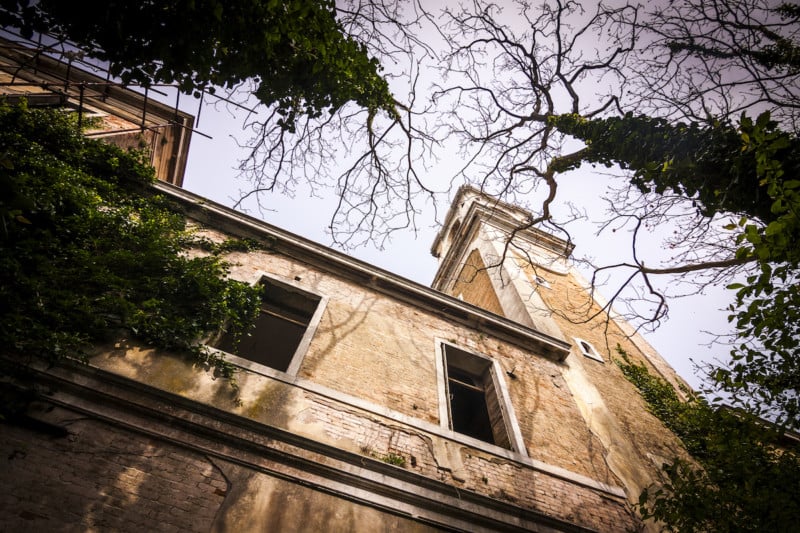 Who wouldn’t want to explore one of the world’s most haunted places given the chance? Okay, on second thought, maybe most people… Well, while on holiday with my family in Venice, I was recently given that chance and I wasn’t going to turn it down.

Poveglia is an abandoned island in the Venice lagoon. It’s been called the world’s most haunted island because it was used to house plague victims until their unfortunate deaths… and beyond. It has also been used as an asylum for the mentally ill and, more recently, it has starred in television programs such as Ghost Adventures. 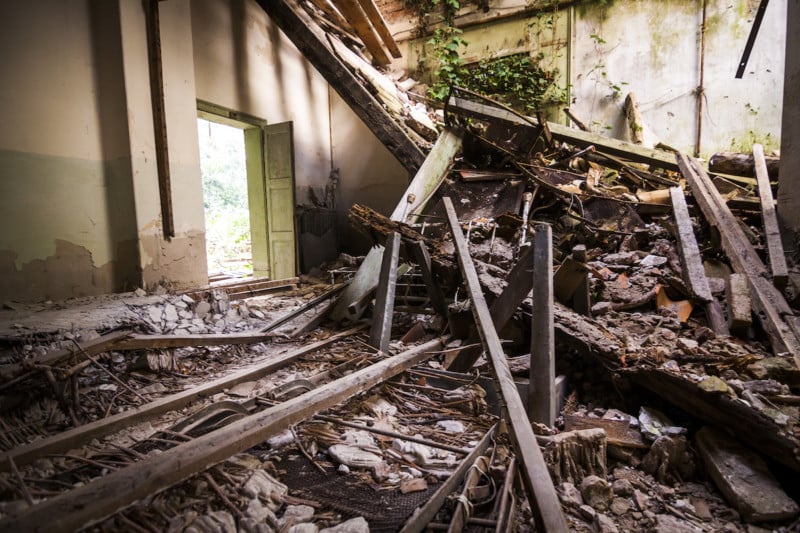 The island is so ‘haunted’ that very few people would dare take you there. In most guide books, the island is considered ‘not visitable,’ and most water taxis will laugh in your face for asking. Fishermen won’t go near the place in fear of hooking bones and bodies. Only three people were able to take my family and I: the tour guide we went with (Thomas) wouldn’t step foot there.

Although Thomas wouldn’t set foot on the island, he agreed to take us there. He was a great boat operator and doubled as an extremely knowledgable guide. Having lived in Venice all of his life, he knew a lot about the area and told us lots about the islands’ histories and all of their current purposes. 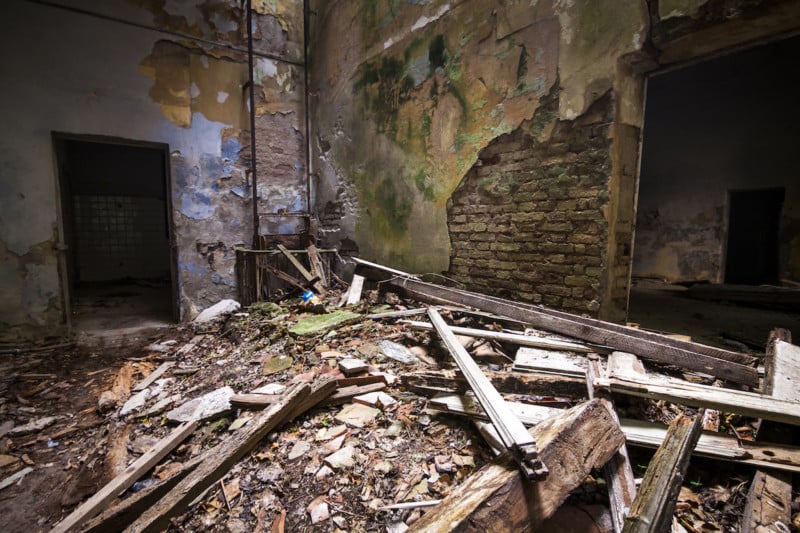 My family and I picked a great day to go. The weather was warm, but there was mist on the horizon—eery and appropriate. For the most part, the water was still and we were the only boat in sight. Thomas’ boat was kept in tip-top condition (although a little small). 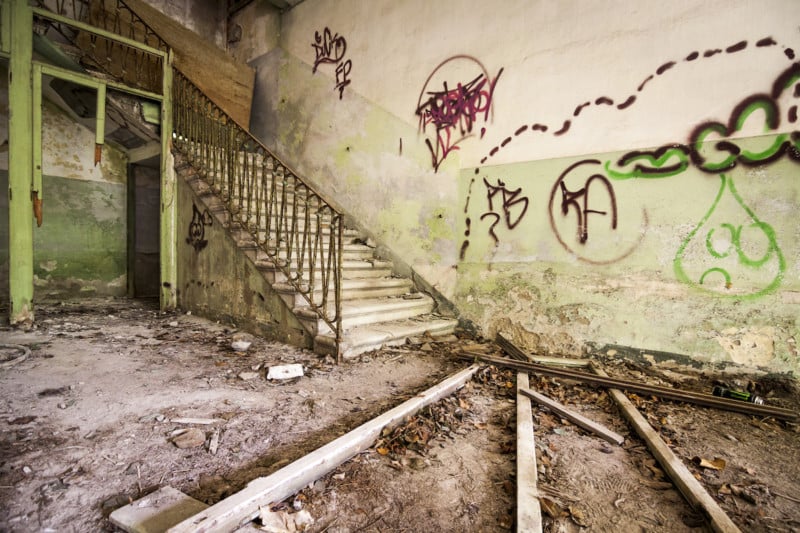 At an arranged time, Thomas picked us up from the Lido. After a scenic boat ride (the long way), we arrived at Poveglia and tied the boat to a landing point that offered easy access. Bypassing the metal fencing and overgrown bushes wasn’t an easy feat, but it wasn’t exactly difficult to get through either.

The run down and slowly collapsing buildings aren’t completely boarded up, so you can explore freely. Although the buildings are crumbling down to piles of rubble, the staircase and second floor of the main building was surprisingly stable. 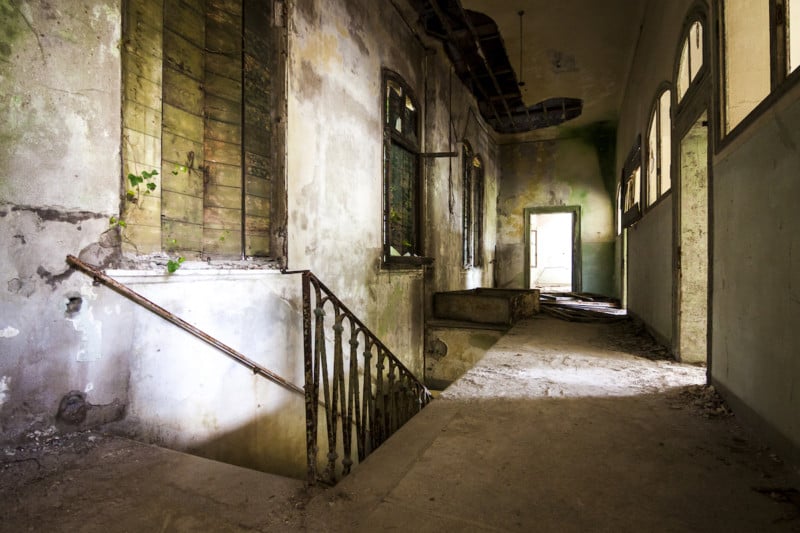 My family and I searched long and hard for access to the bell tower in the photo at the top (and we eventually found it) but there was no light in that area of the building—no windows at the top, so no rewarding views. Plus, it would be incredibly scary seeing as a barbaric doctors are said to have jumped to his death from there after going mad.

In other areas of the building, the rooms were well-lit by giant windows, making it easy to see and explore. All sorts of old equipment and furniture could be found in the rooms… It was totally spooky, but somewhat surprising because of how much the place has been reclaimed by nature. I imagine it won’t be long until the buildings are no longer standing. 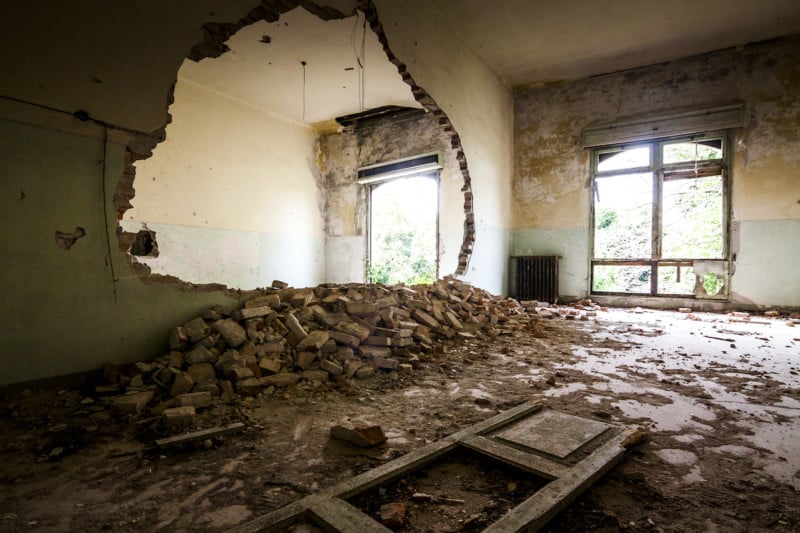 About the author: Alex Stevenson is a photographer based in North Cornwall, UK. He has a deep seated desire to travel the world and photograph it all. You can find his travel photography on his website, Facebook, and Instagram. This post also appeared here.