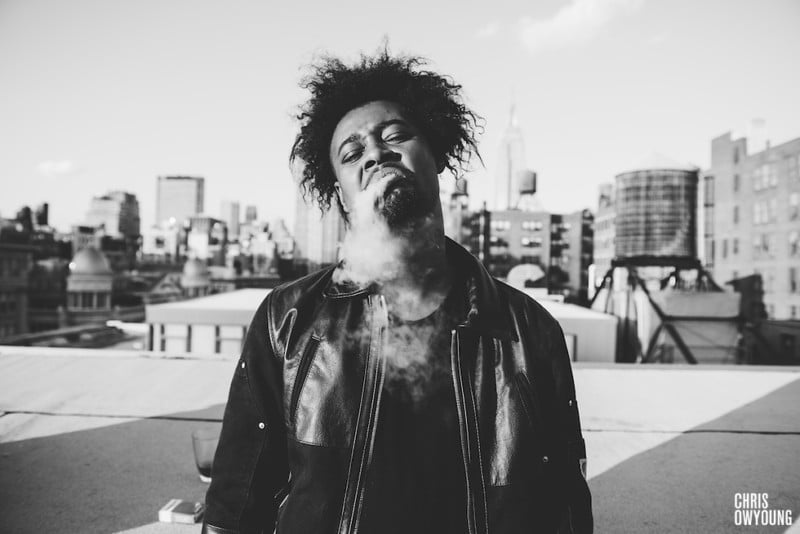 Detroit-born rapper Danny Brown recently caused a ruckus when he posted an image taken in Melbourne by Michelle Grace Hunder to Instagram without permission. The photo had been taken at a music festival for Howl & Echoes, a Sydney-based online music site.

Last night @xdannyxbrownx played a show in Melbourne and I took photos for @HowlandEchoes ! pic.twitter.com/tjRn5bIbLl

H&L Editor-in-chief Lauren Ziegler sent Brown a DM on Twitter to ask him to add a photo credit. Brown’s response was less than cheery, and festival promoter Nic Kelly went public with the exchange.

To which Kelly responded:

According to Ziegler, Howl & Echoes “has become increasingly vigilant about artists posting our photos without credit” following image theft by rapper A$AP Rocky earlier in the year. In a different piece, Ziegler explains, “Howl & Echoes is a small website. We earn practically nothing, we can’t pay our writers, photographers or ourselves.”

Putting aside Brown’s clownish immaturity, the episode illustrates a number of relevant issues. Let me dissect:

The Sharing Generation is getting its comeuppance

A generation of consumers—primarily Millenials—grew up in an era where so much incredible content was freely available, whether legal or not. Now that they have entered the workforce, they are bearing witness to the unsustainability of this economic model as it affects their own lives.

Ziegler asks for photo credit because she can’t “pay our writers, photographers, or ourselves,” but she shouldn’t be surprised that Brown sees no value in the stolen photo when her own staff is ostensibly working for free.

Similarly, it’s fantastic that Kelly is standing up for Howl & Echoes, but his own site’s photo policy is contributing to the problem of free.

We only understand copyright in the context of our own industry

The average person doesn’t understand the process and investment of time and money in taking a really great photo, thus the work of the professional photographer is often trivialized. The issue is exacerbated with misinformation.

@cole_thorpe @xdannyxbrownx go make a song and tell me it's as easy as pointing a camera.

This infuriating ignorance often leads to a lot of moral grandstanding by photographers, but how many of them stole a Photoshop serial number back in the day? How many have illegally downloaded music and movies and justified the behavior? Photographers value photography because their livelihood depends on it.

Should we be surprised that Brown doesn’t consider posting the photo as theft? Should we be surprised that Kelly makes a confusing statement that photo galleries are owned by Project U and the respective photographers, while then extending an unlimited use license for social media (disclaimer: I know nothing about Australian copyright laws)? Neither’s livelihood depends on photography.

Individuals generally have no skin in the game, therefore copyright infringement is easily justifiable

You can be sure that Brown’s label, Fool’s Gold, paid a royalty for the sample because the threat of lawsuit is real. You can probably surmise that Brown would have stolen the sample if he self-published. This isn’t a coded racial statement. This is a fact of how music appropriation occurs, particularly in rap and EDM, on sites on Soundcloud on a daily basis.

If you’re an indie artist with no net worth dumping out a few tracks with negligible views, there’s no incentive for anyone to be “compliant” with licensing. Plus, licensing can be arduous.

Licensing is a pain and corporations need to build easy mechanisms

At the beginning of this year, I produced a series of live music videos for my alma mater. Many of the songs were “covers,” and therefore the school sought to legally license them. Although automated mechanisms exist to create an audio recording of another artist’s song (a “mechanical license”) through sites like Harry Fox, there is no analogous mechanism for adding a visual video component (a “synchronization license”). To obtain a synch license, you need to directly contact the music publisher. Want a synch license for a Bob Dylan song? Write a physical letter because his publishing company has no website, e-mail or telephone. I’m trying to do things legally, and you want to make it as difficult as possible to do the right thing?

Under threat of legal proceedings, sites like YouTube and Soundcloud have added mechanism to detect copyrighted material, and licensing/monetization tools. That’s why, unbeknownst to many content creators, all those cover songs you see on YouTube are actually legal. Big publishers like Sony have licenses in place with YouTube so that a high school kid can upload a cover of Beyoncé.

As a function of scale, there are no clearinghouses or registries for photos. There are no mechanisms in Instagram or Twitter (that I know of) that detect copyrighted photos and pay the content creator (there is, however, an agreement between Pinterest and Getty Images).

Active social media users can post dozens of times per day. It’s not legally nor morally right for Danny Brown to steal a photo, but given the ephemeral nature of social media, should we be surprised at his reaction? I agree that adding a photo credit is trivial and he should have done it, but it’s almost easier to delete the photo.

Instagram might never build a monetization mechanism, but it could pretty easily build an (imperfect) automated crediting system for regrams at the very least.

Music photography (particularly editorial) is notorious for having “no budget.” Ethically, Brown should have added the photo credit, but economically, the credit has zero value.

It’s unlikely that any of Brown’s 259,000 followers would have hired Hunder (wrong addressable market). Hunder should have asked for compensation for use of the photo from Brown’s management, Brown’s management should have a budget for promotion ($50 buys a lot of goodwill nowadays), and Howl & Echoes should have compensated her fairly for her work (I’m assuming she worked for credential).

You can rightfully claim that Danny Brown was a jerk, but the economics of the situation are more nuanced.

Image credits: Photograph by Chris Owyoung and used with permission.

Photo Project Documents What Victims Were Wearing When Sexually Assaulted