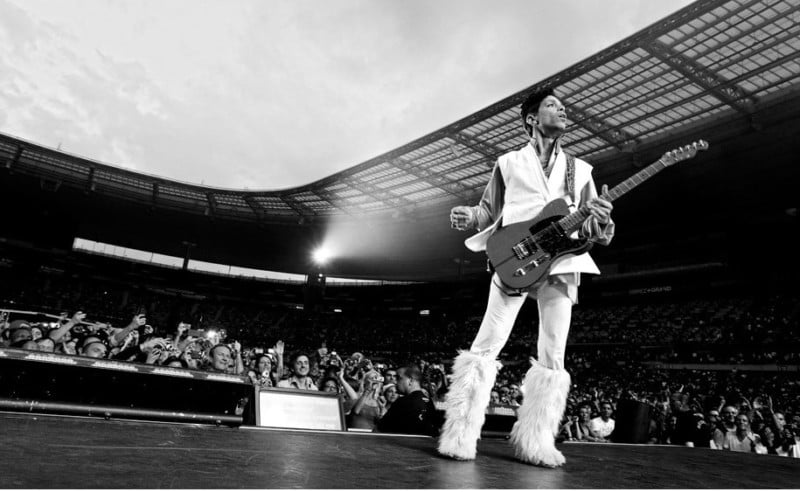 January 28, 1985. I had snuck my 12″ Sampro B/W television that my grandparents had given me into my room because I knew Prince was going to perform, and I figured it was going to happen way past my bedtime. Prince was never one to go onstage early.

“Adventure only comes to those who are willing to be daring and take chances,” Prince said, as he accepted the award for Favorite Pop Album for Purple Rain, beating out Thriller, among others.

June 30, 2011. Paris, France. Opening night of the “Welcome 2 Europe” Tour. I’m his tour photographer. I haven’t met Prince yet, but knowing his reputation, I’d better deliver, or it’s going to be the longest plane ride home in my life.

“Adventure only comes to those who are willing to be daring and take chances.”

Since I didn’t have any direction from him about how he wanted things shot, I decided that I was going to be true to myself and shoot the show the way I thought it should be done. I decided to go for broke and shoot it in an artistic way, to make it worthy of his art and his performance. Prince is a legendary live performer, and in my mind, he should be photographed in an epic, artistic way, not with the same old concert photography.

10,000 frames later, the Paris show ended very late. Curfew laws meant that the stage lights in the stadium went out at 11pm, to prevent the concert from continuing. Prince, though, simply continued to play in the dark. They eventually turned the lights back on, and he finished with an amazing rendition of “Purple Rain.” Afterwards, he played an un-announced after party in Paris which lasted till 4AM.

Prince didn’t have time to review my photos from Paris until the next show, in Gdynia, Poland. I was nervous, but I had my edit ready. Before the show, Prince walks into the production office and says, “Hi, I’m Prince. You have something to show me?”

Normally, when showing an edit, I have things in chronological order, but for some reason, 20 seconds before he walked in, I re-arranged the 200 picture edit to bring my favorite five frames to the beginning. I said, “Yep!” and clicked to the first frame, the shot which I thought encompassed all of what Prince is about—an epic wide shot from behind the stage, Prince facing me, the audience at the Stade de France sprawling out behind him, Prince with his Hohner guitar caught by a spotlight seemingly a mile away. My finest moment. I thought. Kiran, Prince’s manager at the time, said, “Wow.”

Prince stared at the picture for 15 seconds, then stood up, and walked out of the room.

I turned to Kiran and said, “What does that mean?” She said, “I don’t know, he’s never done that before.” We waited for about two or three minutes in silence, then Prince walked back in, with the entire band trailing behind him. He pointed at the screen, smiled, and stood back. The band broke into multiple “Ooohhh’s” and “Ahhhs” and “WOWs!” Prince turned to Kiran and asked, “Where did you find this guy?” I said, “Queens.” Prince laughed out loud, and from then on, we seemed to have a great understanding of each other.

Shooting a musician on tour is both a liberating and limiting experience. On one hand, you usually have all-access and can shoot the whole show, as opposed to three songs. On the other hand, you are limited to the equipment you can carry, so you might find yourself in England without some piece of gear that would have come in handy, so you have to plan carefully in advance. You also don’t have a Sherpa to carry your stuff, so you have to make decisions and sacrifices.

During the Paris show edit, Prince and I went through around 200 selects, with Prince saying “Yes” or “No” to each one. Sometimes he would explain why he was cutting a frame, sometimes he would just smile. As the tour went on, my selects became less and less in number. Some nights I would only show him about 75 pictures, but in return, he might only cut 15. Occasionally he would dismiss a shot that I felt strongly about, and I would explain my thoughts. More often than not, he would prevail, but sometimes, with a sly smile, he would say, “OK.”

My days and nights went like this typically: Wake up at noon, eat, relax for an hour by going for a walk in whatever country we were in, then start gathering and inspecting my gear. I was at the venue around 4PM for a 9PM show, often reviewing last night’s pictures for ideas on how to shoot differently. Unlike other performers I have photographed, with Prince, there is no “set” show. Everything is different every single night. The band has to know 300+ songs, ready to go at the drop of a hat. And let’s talk about those band members. The absolute best, the cream of the crop. Maceo Parker needs no introduction, but the other members were the best musicians I have ever seen, night after night. You have to be, if you are working with Prince.

Around 7PM I would have dinner with crew members, then at 8PM or so, I would gather all my gear and go down to the stage. I like to settle into things, feel the vibe of the crowd, check out sight lines, access, talk to security and introduce myself, everything I can do to make it so that when the show starts, I am only thinking about what is going on onstage and into my camera. A crew member brings the set list out (typed up five minutes before the show starts) and tapes it on the stage. The band comes out and starts warming up, playing some instrumentals while looking at the set list for the first time, then Prince hits the stage. What follows is the best show you have ever seen, every single night. If the audience is good, there will be an encore, and if not, the show is over. In Paris there were three encores.

When the roadie comes out and gives me “the look,” I know the show is over, and I immediately go upstairs and start editing. I would shoot 5k-7K frames a night, and I would download them all and make my selects within an hour of the show ending. Then Prince would summon me to his dressing room for the edit. The first time that happened, I assumed Prince would come out of the shower dressed in sweats, but no, Prince is Prince, all day every day, and he came out of the bathroom in a fresh gold lamé jumpsuit and heels. Deep inside, my 15 year-old self was glad. Sometimes it’s better not to meet your heroes, but not this time.

We would sit on the couch and I would show him the edit, and occasionally ask him questions about performing, like “It seems so effortless how you play the guitar, so easy…” and Prince would answer, “That’s what practicing eight hours a day until my fingers bled, will do for you.” He was friendly, extremely funny, and very saavy… but it was always about the music and the art. I have photographed everyone in the entertainment industry, on stage and off… no one worked harder than Prince, and let me tell you why.

When we were done with the edit, Prince would invite the entire band into his dressing room… and they would all watch, at Prince’s insistence, the ENTIRE concert which they had just played, on DVD. Prince had a huge Plasma television that he brought from city to city explicitly for this purpose. So, at around midnight or 1AM we would start watching the show. This wasn’t just a fun thing to do, though. Prince would critique the show, watching it closely, talking about what worked, what didn’t work, where someone messed up (he even mentioned that he should give fines for missing a beat etc.) and when a song was going really well, he would get up and dance in the dressing room and sing, while watching himself do the same thing on the T.V. It was surreal.

It also gave me insight to why he was so amazing on stage. When you have that single-mindedness, that sense of purpose, that laser focus, it frees you up to be brilliant in your art. The same goes for Jennifer Lawrence who can lose herself so fully in a part that she is hard to recognize, or Steph Curry when he is in the zone on the court. It is a euphoric state, autopilot of creative ability, and when you see it, it is hard to do anything other than shake your head and smile. There were brief moments on the tour where I would just put my camera down for a minute or two, and keep those moments just for myself.

The last night of the tour, before Prince got to the venue, I snuck into his dressing room and left a hand-written note on the table next to the couch. It was just a thank you note for the best job I ever had, along with some other things I won’t share, but I was definitely hoping he would see it before the show, even if it did seem a little cheesy.

When we did the edit that night, I was assuming he would address that note. He didn’t. I was afraid he didn’t see it, and I actually went and looked on the table to make sure it wasn’t still there. At around 4AM, after we had watched the show, he pulled me aside and put his arm around me. “That note put me right, to go onstage tonight. Thank you. These pictures are art. You make art. These need to be seen. Pick one or two per show and send them out, tonight.” I did, and thanked him again.

As photographers, we are a different kind of artist. We don’t often get feedback, we take our little treasures and send them out into the world, and hope they get off the ground, and maybe even fly for a little while. More often than not, we never know how they do.

My note mentioned a kid in Ohio who watched the 1985 American Music Awards with tears in his eyes as a musician named Prince sang “Purple Rain,” and how that kid from Ohio hoped his pictures did justice to the greatest musician he had ever seen.

We’ll miss you forever, Prince, but we’ll love your music even longer.

About the author: Brian Ach is an editorial, commercial, automotive, celebrity, and portrait photographer (among other things), whose work has been published in People, The NY Times, TIME, Entertainment Weekly, InStyle, Ocean Drive, Travel and Leisure, and many others.

Ep. 68: ON1 Set to Take on Adobe Photoshop Lightroom – and more