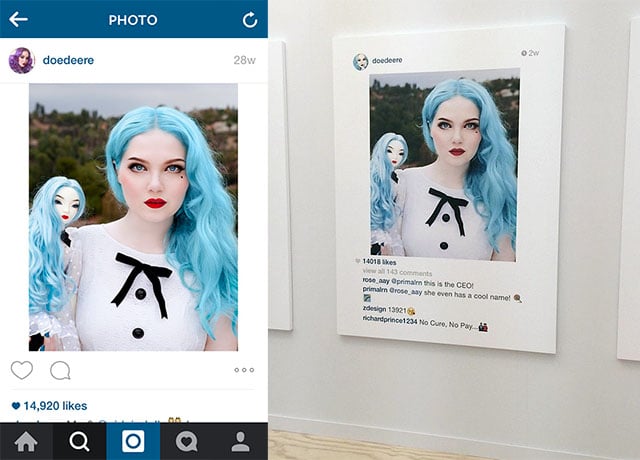 Artist Richard Prince is notorious in the art world for taking other people’s work, “appropriating” them as his own with various changes, and then selling them for large amounts of dough. His latest endeavor is once again raising eyebrows: Prince is selling other people’s Instagram photos for up to $100,000 each.


In a gallery exhibition titled “New Portraits,” which ran at the Gagosian Gallery in NYC from September through October 2014, Prince displayed 38 portraits featuring photos taken from his Instagram feeds — other people’s images, and without permission.

The large 48×65-inch works featured a screenshot of the photo as it appeared on Instagram and a short message posted by Prince himself as the last comment on each one.

One of the project’s photos was by (and of) a woman named Doe Deere, who didn’t find out about the usage until a few days ago. Some new artworks were being exhibited and sold at the Frieze Art Fair in NYC recently.

The artwork was “based” on this photograph that was posted 7 months ago:

In a recent Instagram post, Deere writes that she never gave him permission, but she isn’t planning on taking action over the usage. Oh, and apparently her photo was sold by Prince for a whopping $90,000.

Figured I might as well post this since everyone is texting me. Yes, my portrait is currently displayed at the Frieze Gallery in NYC. Yes, it's just a screenshot (not a painting). No, I did not give my permission and yes, the controversial artist Richard Prince put it up anyway. It's already sold ($90K I've been told) during the VIP preview. No, I'm not gonna go after him. And nope, I have no idea who ended up with it! #lifeisstrange #modernart #wannabuyaninstagrampicture

“There’s no reason for the reproductions to exist, except to make Prince a little cash,” artnet wrote about the show last year. They note that some of the works were being sold for up to $100,000. The article’s title? “Richard Prince Sucks.”

Prince himself has said that copyright is something that “has never interested” him. “For most of my life I owned half a stereo so there was no point in suing me, but that’s changed now and it’s interesting,” he said back in 2011.

His bank account likely has much larger figures these days, but he’s still continuing to test the boundaries between copyright infringement and fair use at the annoyance of photographers around the world.