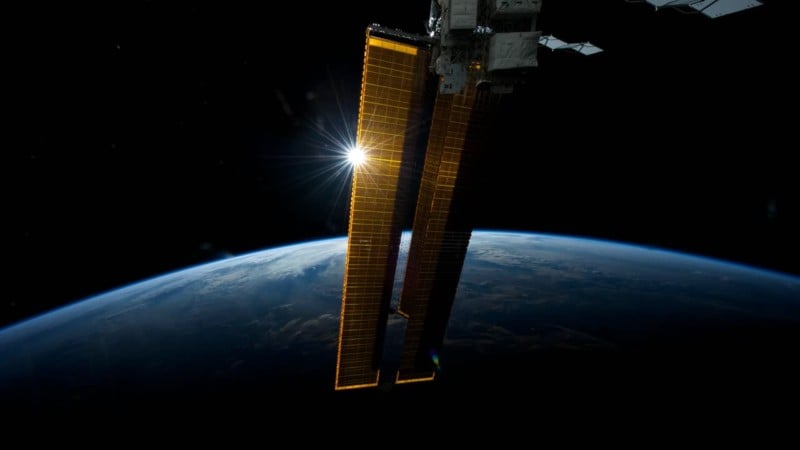 Created using Flixel and images captured by the crew of the International Space Station, Dijcks cinemagraphs offer a peaceful, mesmerizing way to immerse yourself in the kind of view NASA astronauts up there get day in and day out.

Dijcks has created time-lapse sequences from ISS images before, so he was already familiar with the challenges he was going to face.

“The work flow for creating the cinemagraphs was relatively straightforward, but there were some specific challenges,” he explains on the Flixel blog. “One of them is wading through hundreds of thousands of raw images to identify usable time lapse sequences.”

But even once you’ve identified usable segments, the hard part is far from over. “Not every time lapse sequence makes for a good cinemagraph,” he explains. “[For example], very obvious changes in light or terrain make it hard to find a good loop, and distract from the experience.”

Each image involved selecting the appropriate images, processing them to remove hot/dead pixels, and creating a time-lapse sequence that worked using Final Cut Pro X where he also did some subtle cropping and color correcting as needed.

Finally, the last bit is slowing the time-lapse down significantly to create a smooth, easy to watch loop for the cinemagraph. That was probably the most challenging part, since the sequences are often shot at 1 per second by the astronauts.

“I wanted to give the viewer an experience that’s closer to what you would actually observe from the space station,” writes Armand. “This meant dramatically slowing down the time lapses to a fraction of their original speed. I did this is Final Cut Pro using the ‘optical flow’ setting, that interpolates between existing frames to create new ones.”

Sometimes this turned out solid results even at actual, 1 to 1 speed where Final Cut had to create some 30 frames to fill in the gaps. Other times the results were unusable. After a LOT of work, he landed on the mesmerizing results you see here:

To learn more about how Dijcks created these zen-like moving images, or see the cinemagraphs in higher resolution, head over to the Flixel blog. And if you’d like to see more from Armand, visit his website here.