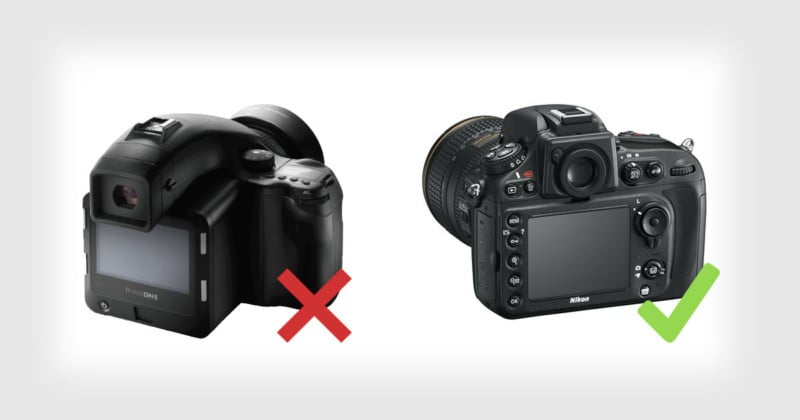 Before I became a fashion photographer I worked as a retoucher and digital tech for other photographers. Full frame was still in its first or second generation, and from what I saw all the best fashion and advertising photographers were shooting digital medium format.

I loved the look of medium format and when it came time to create my own work, I did so on a Phase One system. I’ve been using Phase One almost exclusively ever since. However, over the past few years several things have changed. Compared to 35mm the difference in image quality is still there, but it’s shrinking. At the same time many of the drawbacks of medium format remain, and for me some of those drawbacks have become more serious over time.

After a lot of debating and a 6 month trial period I finally made the switch to Nikon, and here’s my thinking behind that decision.

#1. My patience for the reliability issues ran out

My experience with Phase One in terms of reliability has been terrible. I’m not just talking about the usual hiccups, errors, and misfires that are an almost daily reality when using these camera systems, I’m talking about things that just stop working altogether for no apparent reason. In just the last four years of shooting Phase One I’ve had no less than 7 instances where I was in the middle of a shoot and a body or lens would just spontaneously lock up, requiring it to be sent in for servicing.

This didn’t just happen with my own gear but with rentals too. Of course I carried backups, but even then it’s disruptive and worrying when your supposedly professional equipment just quits on you. At the rate it was happening I needed to carry my Nikon system as an extra backup on travel jobs, because two separate Phase One bodies failing in the same week definitely seemed like a possibility.

Of course this reliability issue itself was nothing new, but as my career got more serious my threshold for dealing with it has gotten lower. I am less willing to put up with the uncertainty, the frustration, the disruption to shoots, and with the many unbillable hours spent getting things fixed.

#2. I got tired of how expensive it is

I started out with a full Phase One IQ160 kit, but with the bodies being so unreliable I needed a second body at about $5,000. Now I had two unreliable bodies. I needed to double up on lenses too, which cost between 1 and 5 grand each. I could never bring myself to buy a second back, but if I had it would have set me back another $10-30K depending on what I’d settle for as a backup.

Recently Phase One put out the new XF body, and upgrading both my bodies to that would have cost me well over $10K while still leaving me with extremely primitive AF and the same frame slow rate. Phase One also released their first back that has decent ISO performance, but it costs almost six times the price of the Pentax system which uses the exact same Sony sensor ($41,000 vs $7,000, including body).

In the end I figured I’ve got a business to run here, and sticking with Phase One just feels like getting robbed.

I’m ﬂying a lot for jobs these days. I don’t always have my assistants on the same flight, and it’s impossible to fit a Phase One kit plus a Nikon kit in a single carry-on. Even with just the Phase One kit plus backup body and backup lenses, batteries, and chargers it’s a problem. By contrast, I can fit two Nikon bodies and all the lenses and chargers I need in a single Pelican 1510 case and have room to spare.

#4. The ergonomics of my Nikon system improved

I always had a D800 but next to the Phase One it never felt like my ‘real’ camera: it’s much smaller, the viewfinder is nothing but a peephole in comparison, and it shoots that silly oblong 2:3 ratio instead of the 3:4 ratio of 645 medium format. In the past months I made a few changes to my setup that addressed these niggles to some extent.

I added a battery grip which makes the camera more comfortable to hold in portrait orientation, and makes the whole thing feel more solid. To improve the viewfinder I added the DK-17M magnifying eyepiece and the DK-19 eye cup. And as a final tweak I started using Nikon’s 4:5 crop mode to keep the ratio closer to both magazine pages and MF cameras.

All these things together mean it feels more like my Nikon is a ‘real’ camera now. (Nikon if you’re reading this: A 3:4 ratio sensor and a better (protruding) viewfinder on your next flagship body will hand you another big chunk of the medium format market).

#5. The sharpness of my Nikon system improved

In terms of resolution and sharpness the Phase One is obviously still the clear winner. But 36MP is not bad, especially since I added a D810 body and Sigma Art lenses to my kit. That combination really stepped up the sharpness by a few notches, especially towards the ends of the frame where the face often ends up in fashion shots.

It’s not medium format, but it’s better than any 35mm camera that came before it and it’s good enough for almost anything I encounter in the real world.

6. I tried shooting Nikon on some real jobs and the ‘look’ is not as far off as I thought

In the studio I was already shooting a lot of things on the Nikon, because with small apertures and controlled light the difference is minimal (apart from resolution obviously). On location with natural light and larger apertures was always where thought MF looked better, mainly because of the way the DOF falls off and the way the Phase One sensor handles highlights and colors. But over the past 6 months I tried doing a number of shoots on the Nikon and it was closer than I had thought in terms of ‘look’.

I can see a difference, but it’s not quite as big as I thought and I don’t even see it in every shot.

#7. My shooting style changed (a little)

I was never a bokeh whore but I think I’m using even less shallow DOF than I did a few years ago. This means I rely less on that beautiful way MF renders out of focus areas.

The more I shot on the Nikon, the more I have come to appreciate the obvious advantages it has over MF. I’m still not shooting very rapidly, but it’s awesome to have the ability to fire off a few shots in quick succession if and when the moment requires it. Having fast, accurate, modern autofocus is a revelation after using Phase One’s antiquated and barely functional system.

And everything simply works, 100% of the time. No misfires, no startup time, no errors, no batteries running out, no worries. I no longer feel like I’m ﬁghting the camera to get a shot.

#9. There is less demand from my clients

When I was starting out, clients would sometimes specify that they needed their campaigns to be shot on medium format. After the Nikon D800 came out in 2012 I’ve slowly stopped hearing these requests almost entirely. Switching to Nikon means I can still use a rented medium format system if and when a client requires it, but I no longer have to add the rental fee to the quote by default or pick up the tab myself.

This is not so much a photography thing as it is a part of my personal outlook on life, but I like getting rid of things more than I like hoarding them. Someone once said ‘the things you own end up owning you’ and I believe that. For every piece of equipment you own you’re also dealing with storing it, upgrading it, insuring it, transporting it, cleaning it, repairing it, thinking about it, updating ﬁrmware…

I would rather own a single rock solid camera system, and have everything else rented and waiting for me when I arrive at a shoot.

From speaking with other fashion photographers I’ve learned that many others have been making the same switch in the past couple of years, for much the same reasons. This hasn’t been great for the resale value of my Phase One system, but it’s nice to know that I’m not alone.

The final test came last month when I had to fly all the way around the world for several jobs. One of the jobs was a new client, a major fashion publication for which I was to shoot three main fashion series and two covers. With that much travel and a new client to impress it was extra important for me to have things go smoothly.

I didn’t want the headaches of the Phase One, and I really wanted the speed, convenience, and reliability of the Nikon. The Phase One stayed at home, which meant that after months of debating I was finally ready to let it go. I will miss the much better viewfinder, and I will miss the native 3:4 ratio. But I won’t miss the ‘temperamental’ nature of the system, the terrible autofocus, the slow speed, the size, the weight, the short battery life, or the monthly insurance premiums.

I still believe that under the right circumstances medium format can and often does look a few percent nicer than 35mm even regardless of sharpness and resolution. I have decided to deal with that loss. I figure what I’m losing in that look, I’m gaining in peace of mind and in being able to get a shot quickly, reliably, and in focus.

About the author: David Cohen de Lara is a fashion photographer based in Sydney and Amsterdam. His clients include Vogue, Glamour, Marie Claire, Tommy Hilfiger, Calvin Klein, O’Neill and Levi’s Vintage Clothing. You can find more of his work on his website, Tumblr, and Instagram. A version of this post originally appeared on the Reddit photography forum.