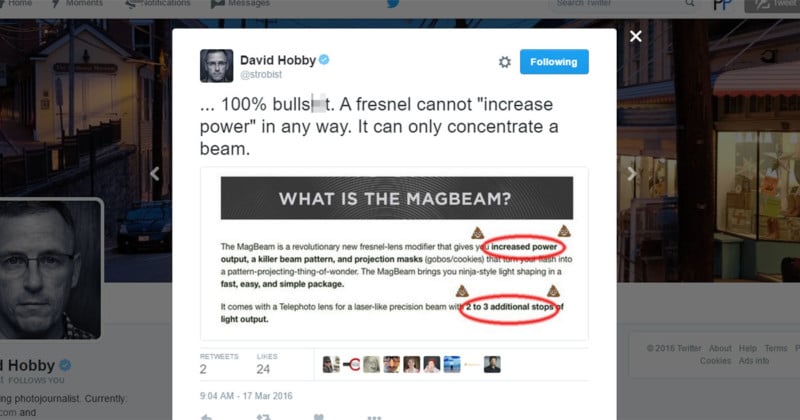 Since launching the MagBeam via a Kickstarter campaign two weeks ago, MagMod has raised nearly $200,000 for the flash extender and gobo. But at least one notable photographer has an issue with how the product is being marketed: David Hobby calls one of MagMod’s claims “100% bulls**t.”

Hobby (of Strobist fame) takes issue with a specific section in the Kickstarter’s description that reads:

The MagBeam is a revolutionary new fresnel-lens modifier that gives you increased power output, a killer beam pattern, and projection masks (gobos/cookies) that turn your flash into a pattern-projecting-thing-of-wonder. The MagBeam brings you ninja-style light shaping in a fast, easy, and simple package.

It comes with a Telephoto lens for a laser-like precision beam with 2 to 3 additional stops of light output.

In a debate with other photographers on Twitter, Hobby argues that it’s impossible that the fresnel lens gives “increased power output,” as MagMod says, and that the company has “raised almost $200,000.00 on a claim that defies physics.”

Other photographers came to MagMod’s defense, arguing that Hobby was unfairly arguing about semantics.

Hobby tells PetaPixel that his Tweets were overly brief and reactionary and “could have been worded better,” but he stands by what he said.

“I do think that the MagMod folks are at least to some degree playing on the ignorance of their backers,” Hobby says. “They make the claim that the MagBeam gives increased power output. This is absolutely false. Unless the beam has a capacitor and or a battery hidden in there somewhere, it’s impossible.”

“I tweeted to them about it,” Hobby continues. “I would have hoped for a response to the effect of, ‘We certainly are not trying to confuse people, and would not want them to think that a simple fresnel can add power to a flash.’ No response. Instead they favorited a tweet from a user who thought it did add more power.”

“The thing is, they do not have to mislead people to make money. A fresnel isn’t magic. It takes a wide beam pattern and concentrates it into a very narrow, but brighter, beam.”

“My point is that you can sell a product without misleading the less knowledgeable folks about what it does,” Hobby says. “But you can apparently sell a lot more of the product if you are willing to mislead them. And $200,000.00 is a strong motivator, I guess.”

MagMod today responded to Hobby by publishing a statement on its website titled “How the MagBeam Fresnel Lens Works.”

“Mr. Hobby questioned our use of the words ‘increased power output’ and we can understand why,” MagMod writes. “The MagBeam has no ability to increase the energy (watt-seconds) that is generated by a flash. But by using a fresnel lens you can collimate, or concentrate, the light into a specific spot.”

“By collimating the light, you increase the amount of light hitting your subject,” says MagMod. “We believe that our customers, with all of our products to date, know that that we are not attempting to mislead anyone through exaggerated claims.”

“David Hobby knows what he’s talking about, but so do the guys at MagMod,” writes Jirsa. “In my mind, MagMod probably simplified their marketing to state “more power” because it’s easier to understand […] David Hobby is also correct that the modifier is not increasing the actual flash power, but is concentrating the beam.”

“In essence, they are both saying the same thing, just in different ways.”

Update: MagMod has made changes to how it’s describing the MagBeam. Here’s a new statement the company just released to PetaPixel:

After discussions with a few different well-respected photographers in the industry we decided to amend the text in the Kickstarter page to make it more clear than it was originally. Where it previously read, “gives you increased power output” we changed it to “gives you concentrated brighter light.” Where it read, “2 to 3 additional stops of light” we changed it to “2 to 3 effective extra stops of useable light.” We believe that our customers know that we are not attempting to mislead anyone through our previous claims but we are always open to suggestions on the best ways of explaining a product’s benefits.

This Photoshop ‘Master’ Will Take Your Retouch Request VERY Literally

The Sunbounce Tight-Fit Screen Adds Another Surface to Their Reflectors