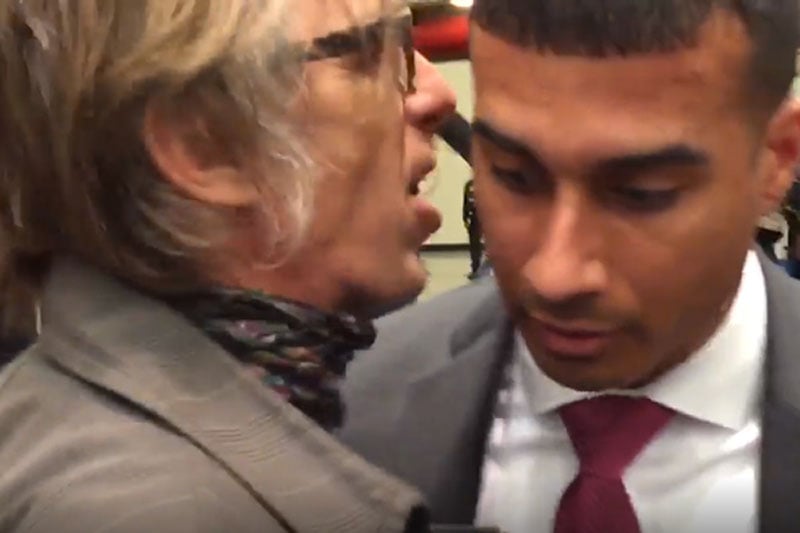 On the day after Spotlight won the Oscar of Best Picture for celebrating hardscrabble journalism that uncovered decades of sexual abuses by the Catholic Church, a Secret Service agent grabbed the neck of a 58-year-old photojournalist and threw him to the ground.

The photojournalist, veteran Christopher Morris, tried to move outside the “press pen” to photograph hecklers who were being escorted from a Donald Trump rally at Radford University in Virginia, but was blocked by the agent. Morris shouted obscenities and allegedly shoved the agent before being taken down.

“In the First Amendment, the Founding Fathers gave the free press the protection it must have to fulfill its essential role in our democracy. The press was to serve the governed, not the governors. The Government’s power to censor the press was abolished so that the press would remain forever free to censure the Government.”
– Supreme Court Justice Hugo L. Black (New York Times Company v United States, 1971)

“This is merely what happens when the Nation keeps saying that the Press are gods on the Earth and in fact have more rights in the US Constitution than any other human being on Earth. Freedom of the Press in the First Amendment means Printing Press… the Written Word.”
– EOD via Breitbart

“That’s the response of a typical pipsqueak getting in over his head. He has no idea who he is dealing with and then when he is handed his head he can’t quite fathom what just took place.”
– bamboo_viper via Brietbart

“He didn’t deserve the chokehold until he decided to also be a dick about it. It’s not like he was actually injured anyway.”
– Banan Tarr via PetaPixel

“The second that reporter touched my throat I would have broke his freakin arm..Yeah hes [sic] lucky. Probably won’t be seeing him at any more events. Can’t imagine they won’t yank his credentials to cover presidential candadites..[sic]”
– TommyD via Brietbart

Ironically, photojournalists have been attacked by both the left and the right.

In November 2015, a line of people protesting racial inequality at the University of Missouri prevented photographer Tim Tai from covering news in Carnahan Quadrangle despite a state law guaranteeing First Amendment protection. Despite keeping his cool, Tai was physically pushed backwards and heckled. Another reporter, Mark Schierbecker, was able to gain access where he encountered the now infamous Melissa Click who called for some “muscle” to force his removal.

Tai and Morris’ reactions represent two ends of a spectrum, but with a similar outcome. Both the restrained and the aggressive approach ended in each photojournalists being prevented from doing his job.

The shame in both cases isn’t just the abhorrent reactions of Click and a US Secret Service agent. The greater shame is the complete lack of recognition by citizens to understand the role of a free press in a democracy, and instead lay blame onto the photographer for doing his/her job.

The press isn’t infallible, and Morris, by his own admission, should have handled the situation differently. But citizenry attacking the press for covering dissenting views, is a harbinger of very, very bad things to come.