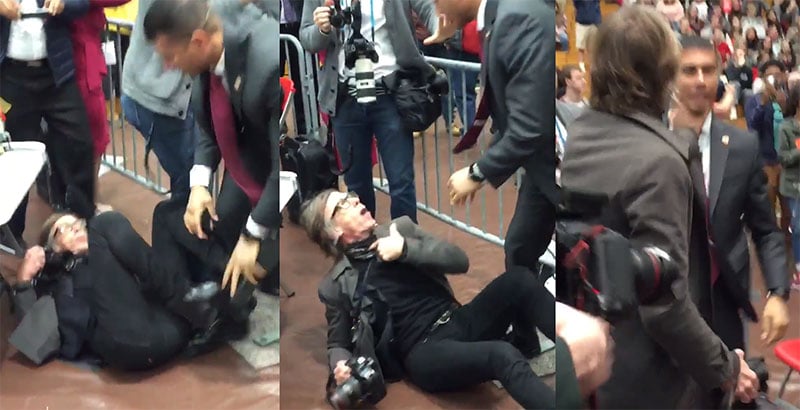 TIME photojournalist Christopher Morris was apparently choke-slammed to the ground today during a Donald Trump rally in Radford, Virginia, by a US Secret Service agent.

The confrontation was captured by a number of cameras held by people at the rally, including Joe Perticone, a reporter with the Independent Journal. He posted a short video to Twitter with the caption: “Secret Service agent choke slams reporter.” It shows the moments immediately after the choke-slam, in which Morris is struggling against the agent as the man hovers over the photographer:

After the video started going viral, Perticone shared a second video that shows the moments immediately before the bodyslam. “Here’s moments prior,” Perticone writes. “The reporter says “f*ck you” — that’s when it got physical.”

Here's moments prior. The reporter says "f*ck you" — that's when it got physical pic.twitter.com/h9K2wIbEWQ

Time Mag photog was "questioned" by USSS at Trump event. Photog appeared to be taken down by agent when he tried to cover protest.

Early reports focused on Morris putting his hand around the agent’s neck after rising from the ground, but Morris says that he was assaulted first and never hit the agent. Morris says he stepped 18-inches out of the press pen before he was confronted and slammed.

Time photog Chris Morris tells me how he was grabbed and taken down at Trump rally pic.twitter.com/XKDJarpXda

The Trump campaign soon issued a statement confirming an incident between a photographer and a USSS agent:

Trump campaign statement on altercation between photographer and Secret Service agent in press pen at event in VA. pic.twitter.com/oiG3vw8EhL

The Secret Service has not yet publicly commented about today’s incident.

Update: The NPPA has issued a statement on this incident.

“We assert the function of the Secret Service at these events is to provide security and deescalate confrontational situations, not create them,” says NPPA president Melissa Lyttle. “It is apparent from various videos of the incident that the agent involved violently threw Mr. Morris to the ground while holding him around the neck.”

“If indeed all Mr. Morris was attempting to do was step out of the press pen to photograph a newsworthy event happening at the rear of the room, the agent clearly overreacted.”

Update on 3/1/16: TIME, Morris, and the Secret Service have both issued statements.

“We are relieved that Chris is feeling OK, and we expect him to be back at work soon,” a TIME spokesperson says.

“I’ve worked for nine years at the White House and have never had an altercation with the Secret Service,” says Morris. “What happened today was very unfortunate and unexpected.”

“The rules at Trump events are significantly stricter than other campaigns and make it very difficult to work as a photographer, as many others have pointed out before me. I regret my role in the confrontation, but the agent’s response was disproportionate and unnecessarily violent. I hope this incident helps call attention to the challenges of press access.”

“The Secret Service is aware of an incident involving an employee of the Secret Service that occurred earlier today in Radford, VA,” says the Secret Service. “At this time, our local field office is working with their law enforcement partners to determine the exact circumstances that led up to this incident. The Secret Service will provide further details as warranted once additional facts surrounding the situation are known.”

I Captured the Beauty of the Netherlands in 20 Photos