National Geographic photographer Cory Richards was recently shooting at Franz Josef Land in the Russian Arctic, just 560 miles from the North Pole, when he was charged by a polar bear that spotted him in the distance. You can see footage of the scary encounter in the 2-minute video above.

“I’ve been working for over a month to try to capture something that both celebrates the power of this animal, but also celebrates intimacy and gets us in close,” Richards says. “This is my first time trying to actually photograph a polar bear in its natural environment. I’m learning. I’m learning every single second.”

The plan was to set up a camera on the beach to shoot close-up photos of the polar bear if it approached to investigate, but the bear started charging while the crew was still standing on the beach (it was reacting to a camera drone being launched). 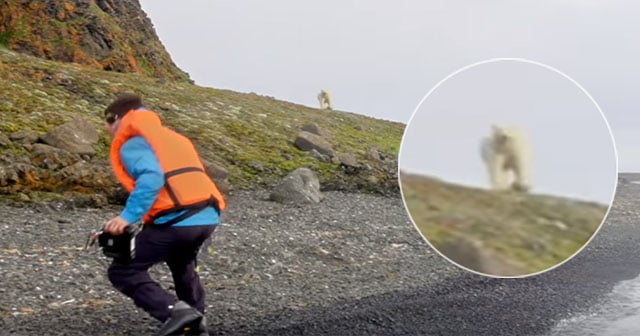 “As I get out of the boat, I’m thinking, ‘First of all, this is stupid. There have been fatal attacks on these islands. People have lost their lives here. I’m willfully jumping onto the beach, with a very hungry bear, who has lost the opportunity to escape with the ice pack. I’m now food. I’m part of the food chain. And I’m certainly not the top of it,'” Richards says.

Luckily for Richards and his team, the bear did examine the camera after the team escaped in their boat, and their efforts were rewarded with a fantastic up-close portrait of the bear.

(via National Geographic via ISO 1200)

This Short Film Was Shot in a 3rd Person POV