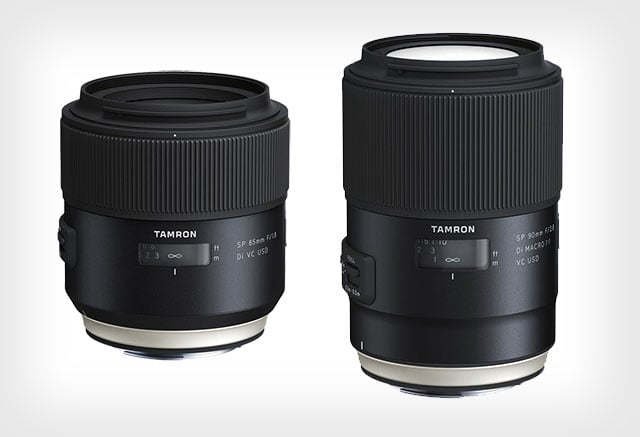 There’s a Fluorine Coating on the front element to prevent condensation and resist smudges, and the body features a Moisture-Resistant Construction to keep wetness out. Other features include an electromagnetic diaphragm system for precise diaphragm and aperture control, Ultrasonic Silent Drive (USD) technology for fast and quiet autofocusing, full time Manual Focus override in AF mode, and a 9-blade circular aperture for smooth bokeh.

The Tamron 85mm f/1.8 VC will be available starting in April 2016. Pricing has yet to be announced. Features include USD for speedy and silent autofocusing, a moisture and dust resistant build, a Fluorine Coating, an internal focusing system so the lens length never changes, a working distance of 139mm (~5.5 in), full-time manual focus override, and a 9-blade circular aperture.

The Tamron 90mm f/2.8 macro lens will be available starting March 2016 for Canon and Nikon mounts, with Sony to follow. It’ll have a price tag of $649.

Update: It has been pointed out that the Zeiss Batis 85mm f/1.8 E-mount lens also has optical image stabilization. It looks like Tamron’s claim has the fine print “Among 85mm F/1.8 interchangeable lenses for full-frame DSLR cameras.” Sony’s lens isn’t for traditional DSLRs, so that explains Tamron’s claim.