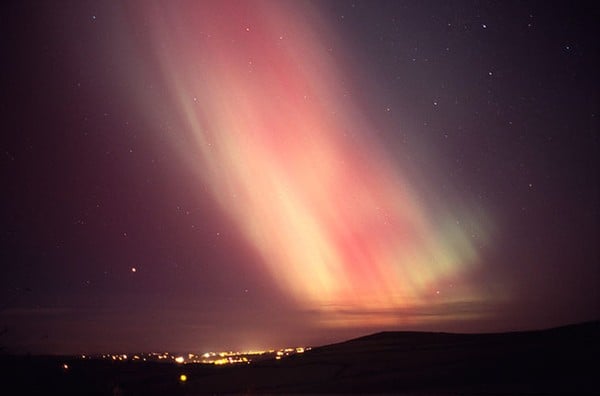 We’ve all seen those images over the past few years (popping up in our Facebook feeds or in the media) depicting spectacular displays of the Aurora Borealis or Northern Lights from Great Britain, Ireland or the lower 48 in the US. Regardless of the location, they’re pretty amazing images.

But beneath the wow-factor and thousands of ‘likes’ and ‘shares’ lurks a nasty little integrity issue. These aurora images may be photographic eye-candy, but many of them are pure high fructose corn syrup.

The extraordinary progress in digital photography has galvanised a revolution in night-time photography. Only ten or 15 years ago, really good photos of the Aurora Borealis or Milky Way were pretty scarce. A majority of photographers were still using expensive, low-ISO slide film, and the guesswork of long exposures, reciprocity failure and using the bulb setting were enough to scare many enthusiasts away.

The development of digital sensors with high usable ISO made it much easier to experiment with this previously dark art (pardon the pun). Results are now much easier to achieve, and invariably of higher quality and impact. The ability to predict auroral displays and disseminate this information on the internet has also vastly increased the numbers of photographers ‘in-the-know’ about upcoming displays.

I’ve been fortunate enough to see the Northern Lights twice from Ireland. The first time I saw them in 2004 was in all likelihood a once-in-a-lifetime display, so powerful that at its peak the aurora was directly overhead, and not in the north at all. Auroras from that storm were visible as far south as the Mediterranean, and Ireland was at the heart of the activity, rather than at its southern fringe as normal.

The display was intense, bright and constantly moving, with all the color and vibrancy you would associate with a classic high-latitude event. After a couple of hours of shooting, I spent another hour just lying on my back and gazing into the sky, mesmerised by the natural lightshow going off overhead. Later I found that my images, shot on ISO400 slide film, had captured the scene pretty much as I remembered it.

The second time I saw an Irish aurora was in March of this year. The St. Patrick’s Day event produced vivid and memorable auroras at higher latitudes, but at lower latitudes like northern Britain and Ireland, the display was very faint, at least to the naked eye.

When I drove out from my home on the northwest coast of Ireland for a look, the NOAA Ovation computer model was telling me we were well inside the view line. 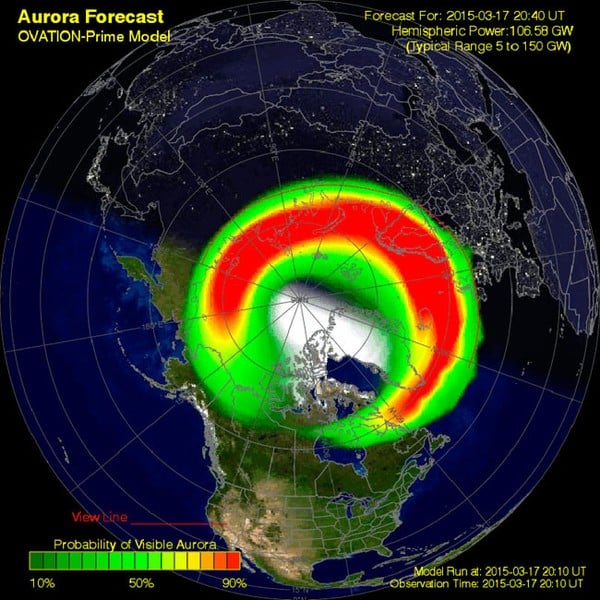 Yet I could see nothing. I drove out to the coast, well away from street lighting, killed the car lights, and peered into the inky blackness of the northern sky. After a minute or two I began to wonder if I could discern a faint discrepancy in the sky. Or was it just some cloud? I couldn’t tell for sure.

So I set up my camera on a tripod, jacked up the ISO and made a 30 second exposure. And there they were, rendered unmistakeably on the camera LCD as a band of luminous green with upper pillars of delicate magenta. Yet the display was still barely visible to my eyes.

So what was going on? Was the camera sensor somehow embellishing what was there, or were my eyes at fault? The answer harks back to basic school biology lessons on the structure of the human eye. In simple terms, our sight relies on two different types of receptor cell.

The first type, cones, respond to bright light conditions and are responsible for giving us color information. The second type, rods, are used in low-light, but don’t transmit color. At night we see a largely monochromatic world, unless there is a light source bright enough to kick off our cone cells. So the sensor was recording what was actually there, but the color was just not visible to my eyes.

I continued shooting, enjoying a half-hour spell just after midnight when the auroras intensified. While still not the stuff of a Discovery Channel documentary, the lights had become much more obvious to the naked eye, containing recognisable structure and faintly discernible color. Again though, the images on my LCD were much stronger and more colorful than what I was observing directly.

The following day the world of social media was awash with aurora photographs, including my own. The treatment of most images was not sympathetic. Invariably saturation had been added to the point that some images, taken in a geographically similar location, depicted auroras of lurid brilliance and intensity.

I had posted my own images as they came out of the camera, yet over the following days I felt more and more uncomfortable with them. I fielded many expressions of disappointment from Irish people who felt they had missed out on a rare and spectacular display. I had to tell most of them not to worry because the human experience had been pretty underwhelming.

Like most photographers, I routinely use adjustments in Photoshop (including increases in saturation) to render daylight images that replicate the visual and emotional impact of the original scene. This process always throws up issues of truth and integrity, especially in situations of strong and unusual lighting, where genuinely magical light may be interpreted as too much Photoshop. But this was an entirely unfamiliar situation. Here I was making no adjustments at all, yet feeling as though my image still lacked integrity.

The disparity between eye and camera was exacerbated by the faintness of the display. On delving into the subject a bit more, it turns out that aurora displays with colors visible to the eye are quite rare at lower latitudes. More intense aurora have sufficient brightness to kick our cones into operation and allow us to perceive a great deal more of their color. Compare the image I shot in 2004 on ISO400 slide film, to those from March 2015, shot at ISO3200 on a Canon 5D Mark II: that’s a three-stop difference in brightness.

To further complicate matters, anecdotal evidence suggests that while some people may perceive a weak aurora as monochromatic, others viewing from the same location may still be able to discern color. 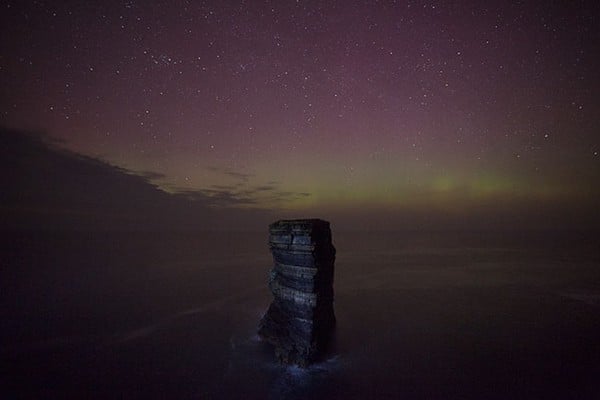 So where does that leave us? There are plenty of photographic techniques that allow the camera to see the world in an way that our eyes cannot. Infrared is a good example. Infrared images could never be accused of lacking integrity because the viewer is in no doubt that what they are seeing is a rendition of reality that the eye cannot replicate.

Similarly, many modern images of the Milky Way are so clearly removed from what we experience with our own eyes when we look up into the night sky, that they couldn’t be accused of trying to dupe the viewer. Such images can therefore be judged entirely on their own merit.

Perhaps integrity stems from the perspective of the viewer. If aurora images are shared between enthusiasts specialising in astro photography, who recognise the technicalities of what the camera records, there is hardly an issue. But if these images are used as documentary evidence in the media, to illustrate a particular event on a particular night, a problem arises.

In this context, the vast majority of viewers will look at these images and infer that this is what they would have seen had they been standing beside the photographer. This may well be untrue, in which case the viewer has been deceived. I’d argue that the majority of images of lower-latitude auroral displays from the last few years would fall into this category, including those used by the most respected mainstream media outlets.

Does it matter? Well I think it does. Great photographs are not simply a rendition of what the camera is able to record. They need creative human input, but equally they must be rooted in the human experience. As a species we are blessed to have evolved the capacity for awe and wonder, which is why images of aurora, and more general photos of landscape and nature, are so popular. However the power of these images relies on the viewer’s sense of its integrity. 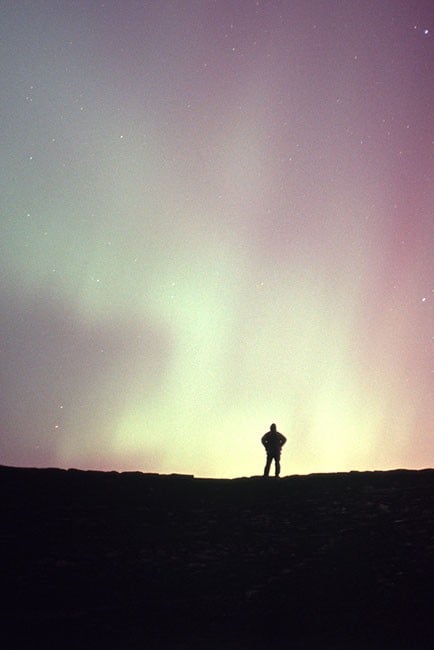 Like an undisclosed double exposure, or an unrealistic use of post-processing, misleading aurora images stand to benefit from a short-term popularity, because despite the cynicism of modern discourse, there is a still a balance of credulity in the general audience for photography. But eventually an understanding of this particular gulf between the eye and the camera, and the way it can be abused, will become more widely understood by the general public. The result? A further erosion of society’s trust in the integrity of photography.

Personally I’ve decided I would rather come clean about this kind of aurora photography. Especially at low latitudes, vivid auroral displays remain a rare occurrence, and we only diminish their wonder by pretending to our audience that every faint glow is a wondrous spectacle.

About the author: Gareth McCormack is a landscape and travel photographer based in County Sligo, Ireland. His images have appeared in many magazines and newspapers including: Time, The Economist, National Geographic Traveller, The New York Times and Wanderlust. You can find more of his work and connect with him on his website, Facebook, and Twitter. This article was also published here and here.