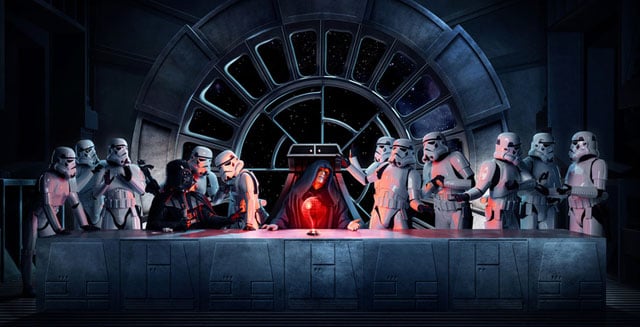 Sometimes, photography is about being brilliant at lighting, or capturing a decisive moment, but often it’s as much about collaborating with other talented people to realize a vision as it is about your own skills.

The idea of recreating Leonardo da Vinci’s The Last Supper using characters from Star Wars had been in my head for over a year before I was finally able to make it real.


The painting is such an iconic and brilliantly composed imaged, and such a great way of showing a large group of people, that it has been used and parodied by many films, TV shows and other groups. But I had never seen it done in the way I wanted to present it, and the key for me was the relationship between Darth Vader and the Emperor.

In The Last Supper, one of the apostles shown is Judas, who went on to betray Jesus. In Return of the Jedi, Darth Vader finally betrays the Emperor, killing him. Recreating the painting with the Emperor in the role of Jesus and Vader as Judas meant that the photo worked not only visually, but conceptually as well, with some emotional drama as well as just a nice composition.

I sketched out the image, using stormtroopers in the roles of the other apostles, and then developed it further with color and lighting. I felt that the scene needed a central element, something that everyone could be focusing on, and so had the idea of adding in the hologram of the second Death Star, which not only gives a focal point to the image but also dramatically lights the characters. I also decided that the perfect setting for the scene would be the Emperor’s throne room on the Death Star, with that amazing, iconic round window behind him as he sits in his throne. 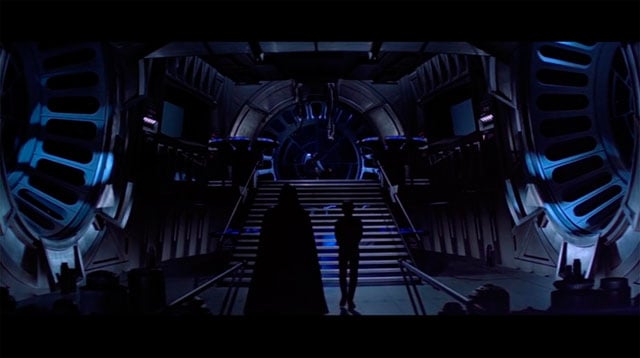 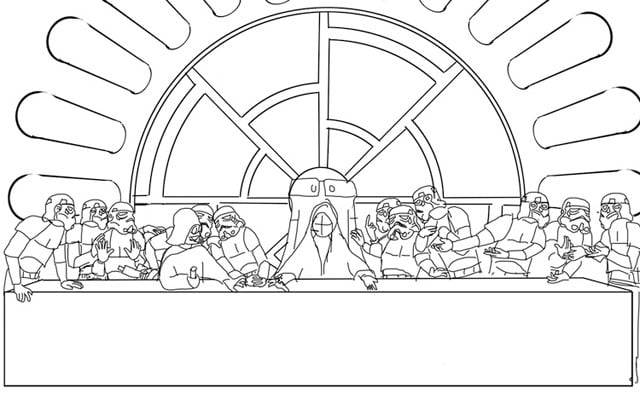 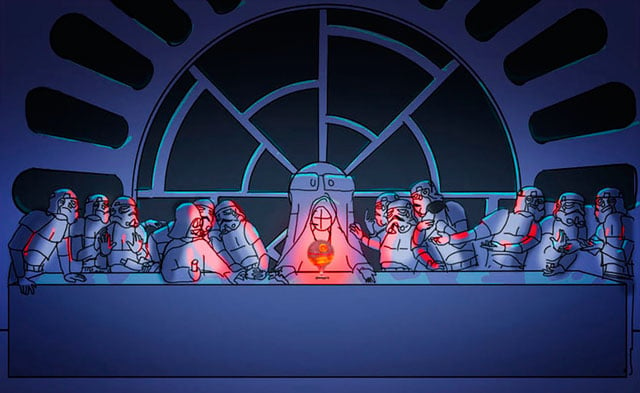 So now all I needed was an Emperor, Darth Vader, eleven stormtroopers, a full size throne, a 20ft wide table and a huge set with gigantic round window looking out into space. Simple right?

Luckily for me I have some amazing friends. I had already done a shoot a year or so before with a group of Star Wars enthusiasts, and through my friends there I managed to pull together an Emperor, a Darth Vader and four stormtroopers (top tip, stormtroopers all look the same, so you can reuse them in the image!).

Next was the set. There was no way I could even begin to attempt to build a physical set, so much as I would have liked to go A New Hope and do everything physically, I sadly had to go down the Phantom Menace route and design a completely digital set. My good friend Steve Newman is a dab hand at 3D modelling, and agreed to build a replica of the throne room in 3D, into which we could place a virtual camera and virtual lights to match the real people I would photograph.

Getting everyone together in one place proved a challenge, but my producer Chris managed to find us a spot at very short notice, on a Sunday evening, at the awesome Shoreditch Studios, and we were off. 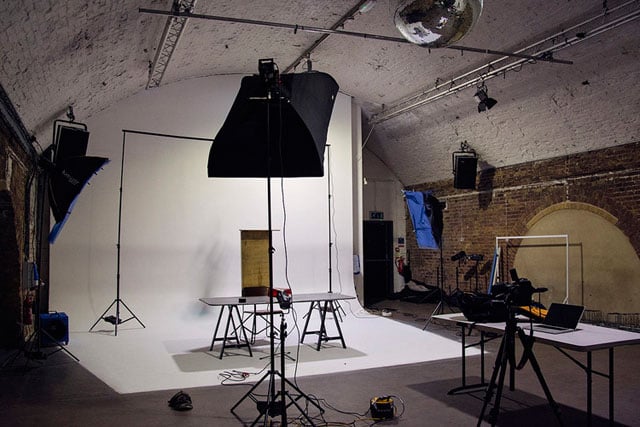 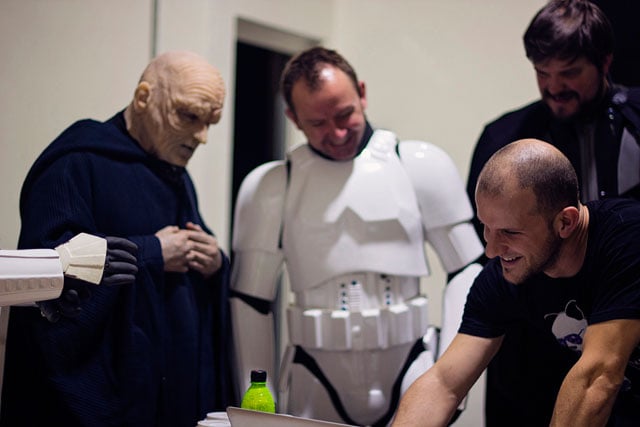 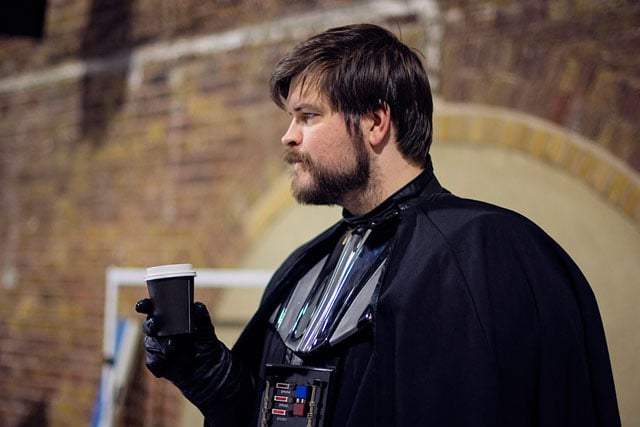 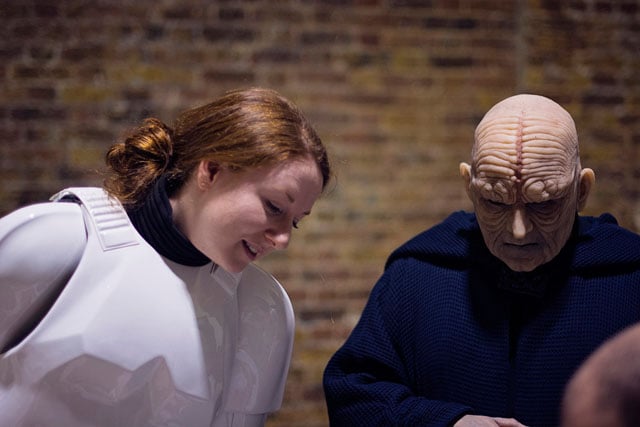 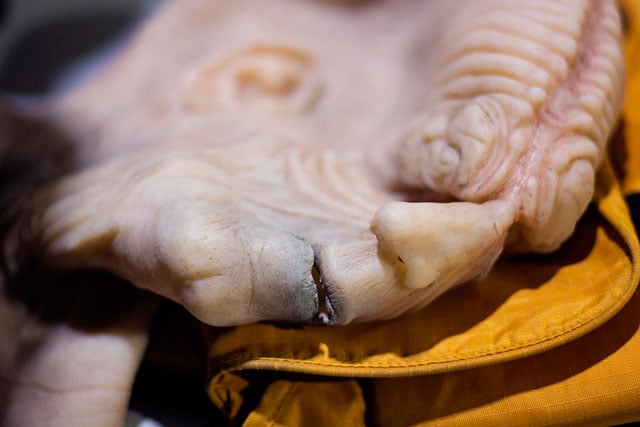 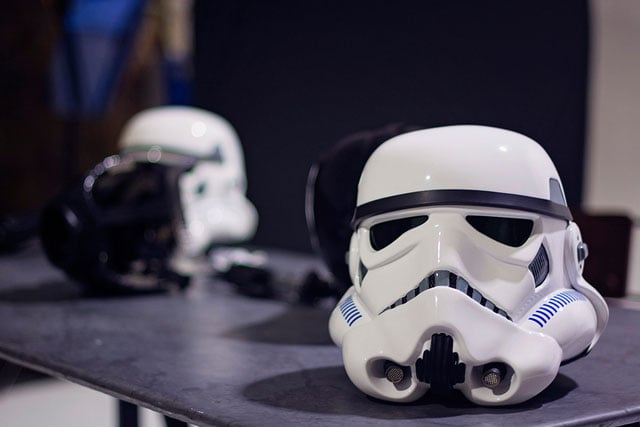 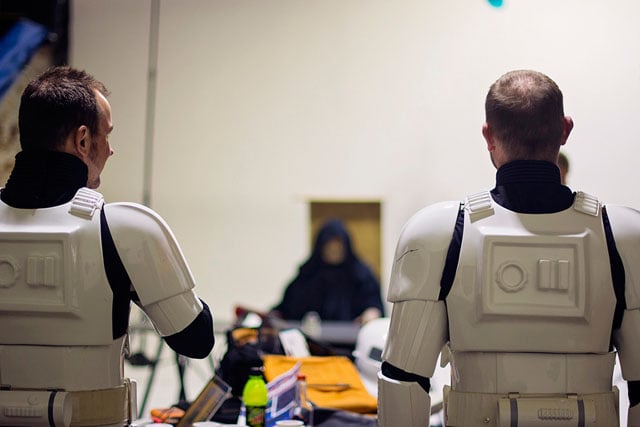 Because I only had four stormtroopers, and limited space in the studio, I decided not to attempt to create the full scene in one go. The painting is composed in groups of three, and then Jesus in the center, and so I split my shooting into the same groups.

Lighting-wise, I shot using Bowens Gemini heads as always, with a blue/green backlight to simulate the starlight coming in through the window, kept everything else quite cool and moody, and used a red gelled light to simulate the light from the holographic Death Star. This had to be progressively moved away as i shot groups further down the table. 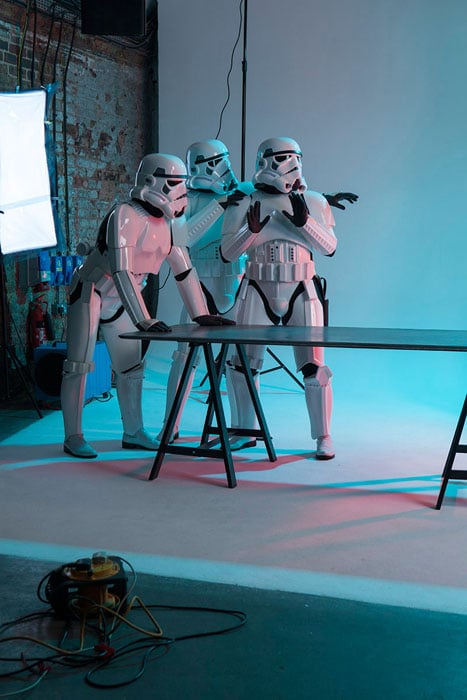 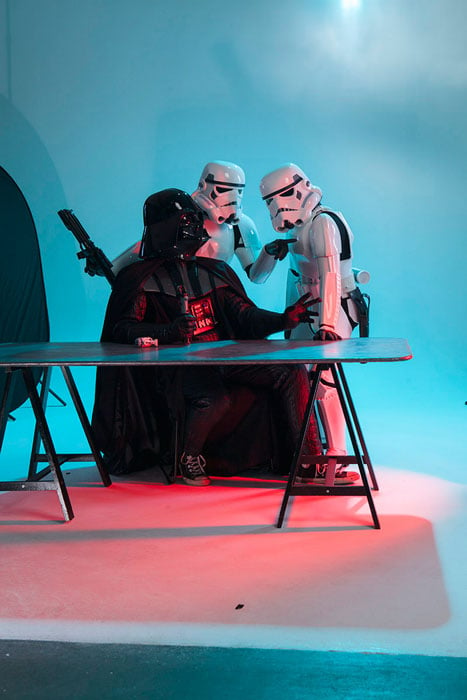 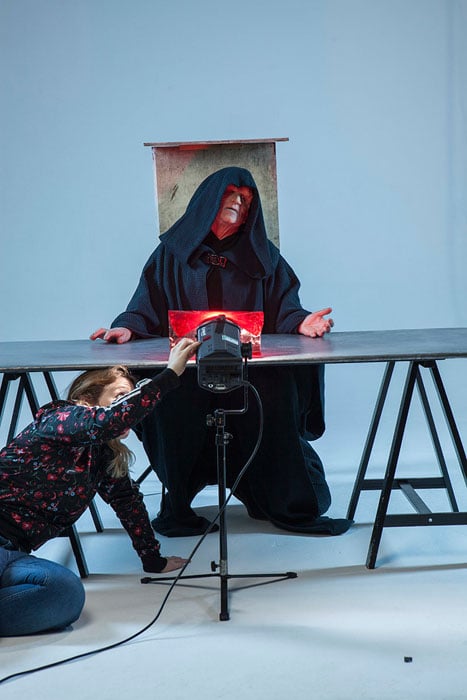 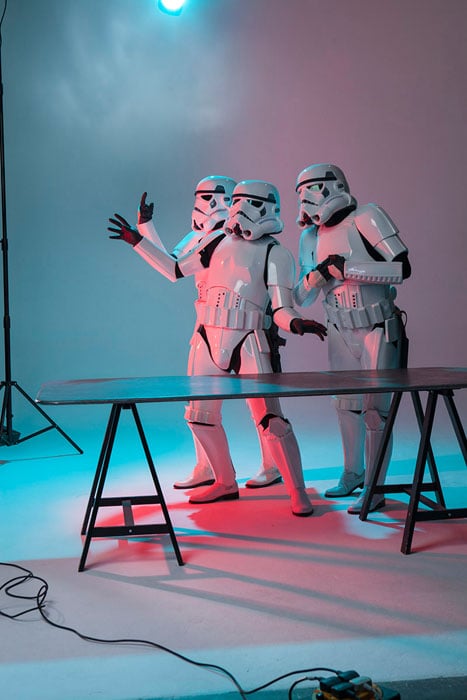 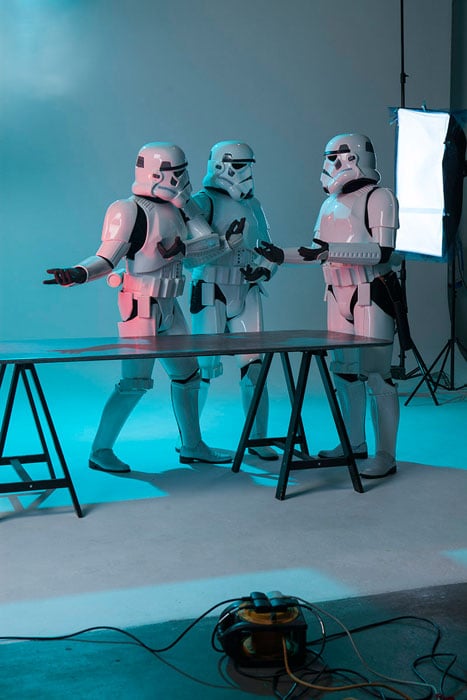 In order to recreate the feel of the original painting I paid close attention to poses, including hand positions. Because Vader and the stormtroopers have no facial expressions we had to convey everything with body language. Doing this made me realize just how good Da Vinci was at arranging and realizing the poses of his characters! 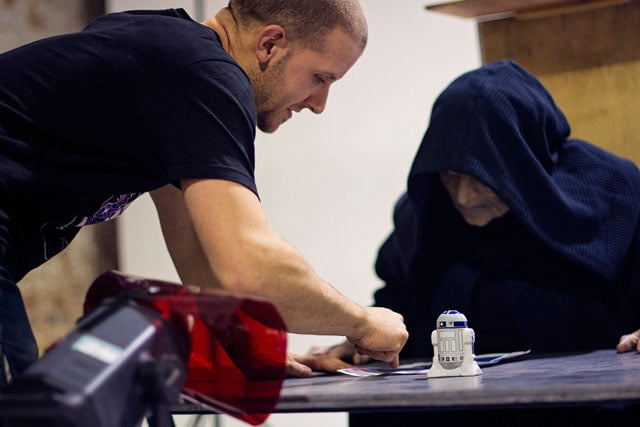 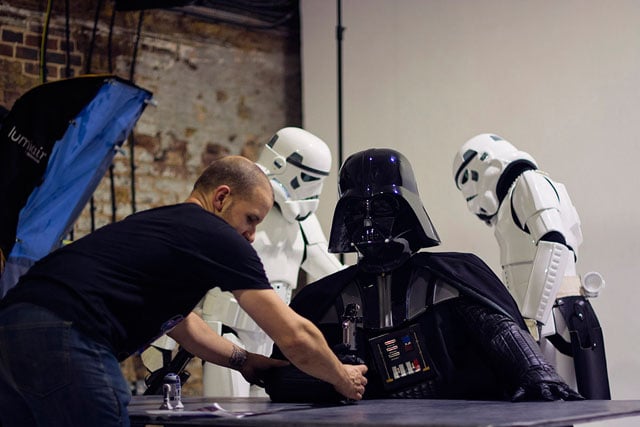 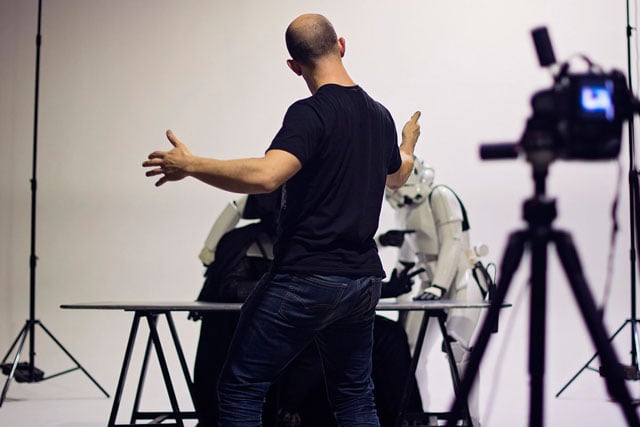 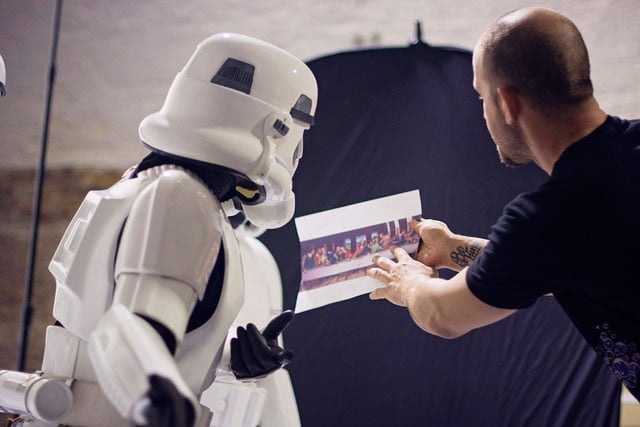 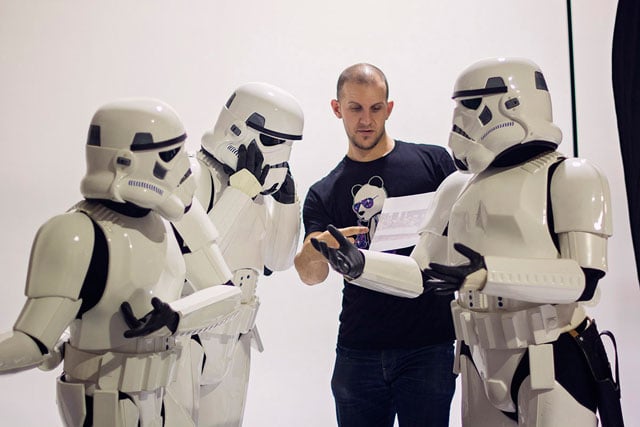 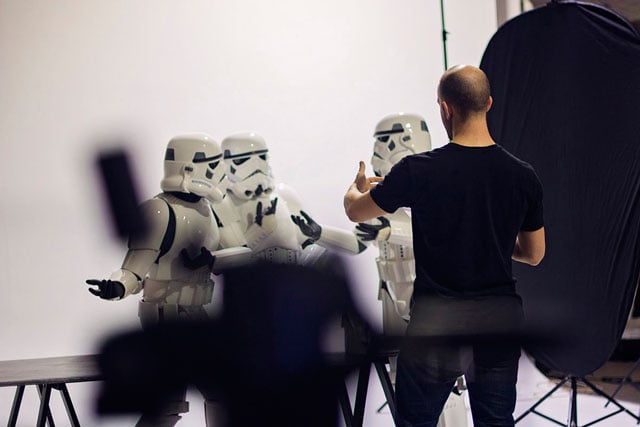 With everybody photographed it was time to render out the completed throne room model. Working with Steve, I lit it in various different ways to recreate different lights in the set, and then combined these to create a master set with light coming in from outside the window, top light from in the ceiling, and uplighters around the window frame. 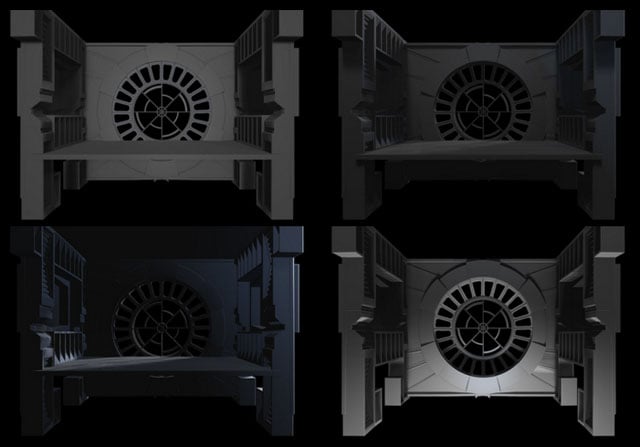 This looked great as a CGI image, but with real photographic characters in place it would feel way too smooth and fake, so I had to add a load of texture to the surfaces in Photoshop to really make it work as a real world environment. 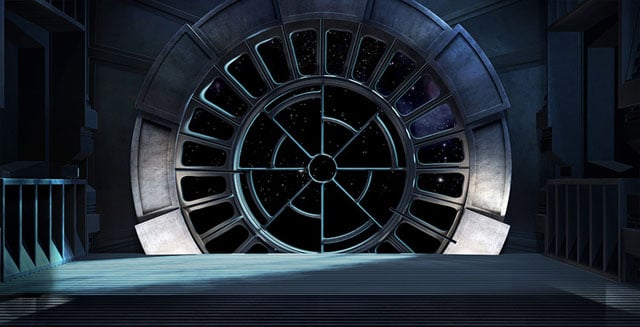 Then it was time to add the furniture. I used the actual zinc tabletop from the studio, and created a flat front using the same metal texture and some panel shapes. Steve built me a little 3D holoprojector in Z Brush, and my friend Kristin made me a brilliant Death Star wireframe hologram, based on a model from animium.com.

The chair was also built in Z Brush, and built up of multiple lighting passes before being colored and textured in Photoshop. 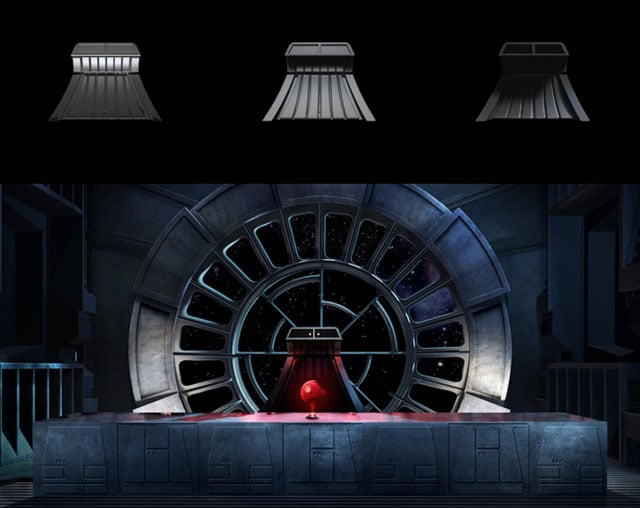 Then it was just a case of dropping the people in and doing a little grading work, and it was complete!

Here’s an animated “motion poster” version of the image:

About the author: Steve Brown is an editorial, advertising, and TV photographer living in Central London. You can connect with him and find more of his work on his website, Twitter, Instagram, and Behance. This article was also published here.