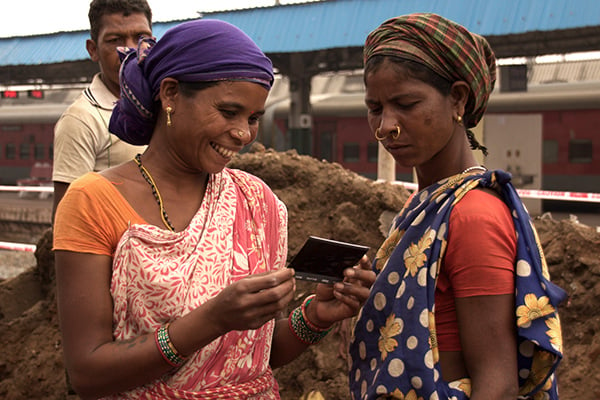 Given the utter ubiquity of photography in the USA, most Americans probably don’t view photography as special. But in impoverished areas around the world, personal photos can be rare. On visits to her birthplace of Kolkata, India, Bipasha Shom frequently took portraits of people she met, and she was struck by how many people lacked access to a camera and had no family photos of her own.

Shom hatched an idea to use instant film to bring photography to these people, and she successfully pitched Fujifilm out of the blue. With donated Instax Wide cameras and film in hand, she recently traveled with her husband Chris Manley (Director of Photography for AMC’s Mad Men) and friend/photographer Julie Black Nicholas to Kolkata and began delivering the gift of photography while sharing the photos through Instagram @givephotos.

Although she enjoys taking photos, Shom is not a professional photographer. Yet, her love for photography and her realization of its cultural and personal value led her to pursue this passion project. It’s a good reminder that the value of photography isn’t derived by the pedigree of the photographer. We all own photography. And to the individual who preciously tucks the instant photo into a wallet – grabbing a fleeting glance until the photo is faded and wrinkled – the value is immeasurable.

I interviewed Shom via email. What is your connection to Kolkata? How often do you go to India?

My parents left Kolkata when I was two years old to settle in the United States. We were the only ones from our family living in the U.S. so we would travel back to India every four years or so to visit relatives. I grew up speaking Bengali at home.

What prompted you to tackle the project now?

My brother was getting married in Kolkata and my children had quite a bit of time off for winter vacation. Also, my husband had a break from his hectic work schedule and could help document the project. A good friend of mine and talented photographer, Julie Black, agreed to accompany us. I had just quit a very stressful job producing a live news radio show. But, it was on that show that we interviewed the director of the film “Siddharth” about a man who was trying to track down his missing son without having any photos of the boy. The idea of giving photos to people was brewing inside me for quite some time and I realized that this would be the perfect opportunity to do it.

What was involved with pitching Fujifilm on the project?

I googled and found an email for an executive at Fujifilm and wrote to him about the project. He forwarded the idea to their marketing department who then contacted me asking for more details. I wrote out a proposal fully explaining the idea and how we would execute it. All our communications were through email and they agreed to give me 1,000 prints and 4 cameras. There were very few stipulations although I did need to sign a contract which asked me to credit Fujifilm for their donation when discussing the project. Fujifilm has been completely hands off about the project – we have had complete editorial control. We discussed editing together a video piece about the project which they may promote via their social media.

How would you suggest photographers pitch companies for sponsorship to optimize their success?

I think it ultimately comes down to having a good fit between your idea and the company’s goals. We didn’t have any personal contacts at Fujifilm and only approached them through email. My husband did however, have a friend who had personal contacts at Samsung. We had always wanted to document the project on video and so we also sent the proposal to Samsung and they donated 2 of their NX1 4k bodies and lenses.

What has been the most challenging aspect of the project? Have you encountered any unanticipated events or situations, good or bad?

There was one place we visited where people were living on the streets and no one wanted their picture taken. We realized that it was an area that was heavily trafficked by tourists and that many people living there were completely jaded by people who came and took their photos without giving anything in return. They were very suspicious of us. Most people we met however, were thrilled to get a picture. We didn’t initially tell people that they were getting a picture. We just asked if we could take the photo and 9 times out of 10 people agreed.

We would ask people if they had photos of themselves and sometimes people who we thought didn’t have photos would say yes. When we probed further we found that they were referring to their voter ID card photos which are standard 1″ by 1″ photos taken against a blue backdrop. One person said she had a photo album and we asked to see it. She brought out a flimsy 5″ x 7″ plastic book with sleeves that held about 15 pictures. This was her family’s entire photographic collection.

We started out taking medium closeup size portraits of people but quickly realized that they would rather have wide shots or shots which included their surroundings or personal items. People also wanted group pictures – photos where they were standing next to their children, or siblings or friends.

When we first arrived at a place and started giving pictures there would be very few people. By the time we left there would be a huge crowd with people clamoring to have their photo taken. Usually the children were the most persistent asking for more than one picture. Sometimes mothers would run home and get their children dressed up in their best clothes and bring them out again to have them photographed.

The challenge now is in sharing the project. We’re gradually finding followers on Instagram who are interested in seeing the pictures. Managing the social media was the most difficult aspect of the project. We were hoping to update the Instagram in real time or at least day by day but we couldn’t get a wifi signal in some of places we visited. We spent about a week trying to set up a mobile hot spot to get access to the web. It was very frustrating.

Have you thought about the sustainability of the project? Or using it as a template for other poor areas of the world that might benefit from a similar project?

Yes! We would love to continue the project and travel to other countries. We realize that giving a photo is not like building a school or a hospital or feeding the hungry. But, I think a photo is something that feeds the soul. So many people we gave photos to said that they would have them framed and put on their wall. It’s hard to know how these images will impact people’s lives but I think we’ve brought some small amount of happiness.

How are you measuring the success of the project?

Personally I think about the sheer joy on the faces of the people we’ve given images to and I feel a real sense of satisfaction. I think ultimately we’d like to see if we can continue the project in other countries with some funding. It would be great to partner with another non-profit or to have Fujifilm help us continue. We were able to get some press coverage in India where people have had a great response to the project. We did an interview with CNN India where they followed us with their cameraman as we gave away photos. I think it would be a great success if we could inspire other travelers to share their photographs whether it’s with an instant camera or a photo printer. The beauty of giving a photo is that it breaks the ice and suddenly you can engage with someone and learn something about their lives.