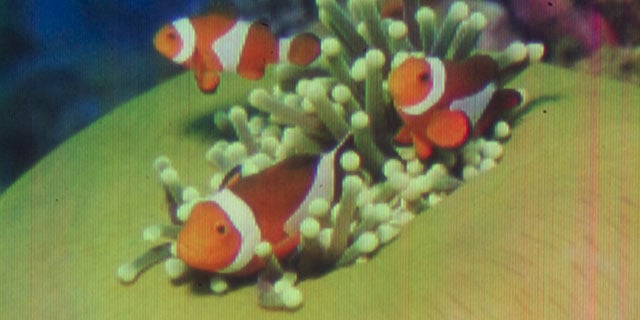 Believe it or not, what you see here is the world’s smallest color inkjet photo ever printed. It’s so small that it’s invisible to the naked eye: you’ll need a microscope to see the shot, which shows clown fishes hanging around their sea anemone home.

The photo was made by researchers at ETH Zurich and a project spin-off start-up company called Scrona. Using a groundbreaking technology called 3D NanoDrip that was invented at the university, the team was able to print the photo onto an area that measures 80×115 micrometers, or about 0.0092 square millimeters.

That’s the equivalent of the cross-section of a single strand of human hair, or a single pixel found on an ultra-high-resolution Retina display.

This scale was achieved thanks to something called quantum dots (QD), or nanoparticles that are made to emit light of a specific color. Layers of QDs were printed in 24-bit color at a resolution of 25,000 DPI — Retina displays are “only” 264 PPI — with a distance of just 500 nanometers between the dots.

The remarkably small photo that resulted has been officially awarded the world’s “smallest inkjet-printed colour image” by Guinness World Records.

If you’d like to own a micron scale photo of your own, that’s actually possible. Scrona is running a Kickstarter campaign for a credit card-sized microscope called µPeek that attaches to your smartphone. Contribute $594, and in addition to a µPeek, you’ll also receive a micron photo made with any photo of your choice.

(via ETH Zurich via Engadget)

Image credits: Smallest photo by Scrona/ETH Zurich, and human hair illustration based on photo by WarOnTomato

‘The Revenant’ Was Shot Almost Entirely with Natural Light