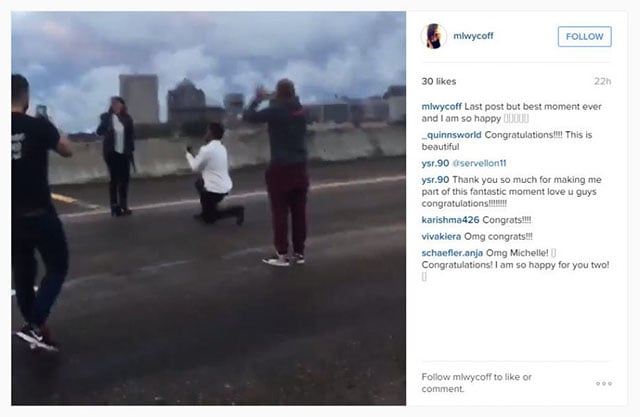 A man in Houston, Texas, is being heavily criticized this week after causing traffic on a major freeway to come to a standstill while he proposed to his girlfriend — all for “priceless” photos and a video that were shared on Instagram and Facebook.

The Houston Chronicle reports that 24-year-old Vidal Valladares got out of his car on Interstate 45, dropped down on one knee, and proposed to his girlfriend, 23-year-old Michelle Wycoff, while friends captured the moment on their cameras.

Valladares tells ABC13 that he got friends and family to stop traffic by taking up all 4 lanes with 8 cars.

Here’s the video of the proposal, which caused blaring honks from cars that were backed up on one of the city’s busiest highways.

“I just wanted to do something different,” Valladares Navas tells the Chronicle. He soon shared the photo on his Facebook page with the caption: “When you shut down one of the biggest and busiest freeways in the entire country (I45) and you ask your girl if she wants to marry u, That moment is priceless”: “…best moment ever and I am so happy,” Wycoff wrote on her Instagram, which has now been set to private. The I-45 is one of Wycoff’s favorite places because Valladares took her on a motorcycle ride on it for their second date.

This video has since gone viral online, with the vast majority of people criticizing Valladares for being selfish and endangering people’s lives with his proposal stunt.

A Portrait of an Offbeat Portrait Photographer