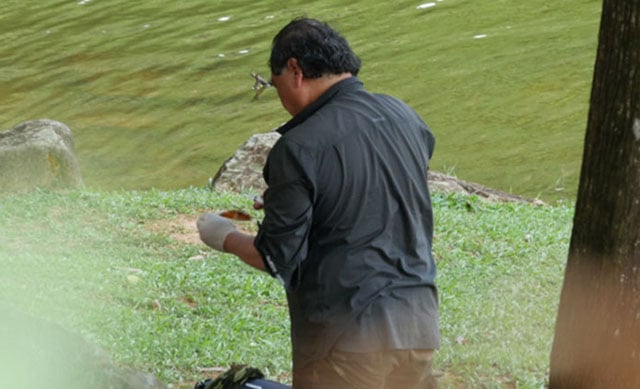 A group of bird photographers in Singapore have sparked outrage after they were caught on camera allegedly filling live fish with air and Styrofoam in order to bait the endangered grey-headed fish eagle.

The website 10,000 Birds reported on the incident last month, and Mothership.sg has since obtained and published footage of the practice. It was shot by an amateur Singaporean nature photographer named Charlie Gordon, who witnessed what the men were doing nearby:

We have received this video showing a group of nature photographers allegedly using live fish stuffed with Styrofoam bits to bait critically-endangered Grey-headed Fish Eagles.All this, so they can take better photos of the fish eagles.The incident took place on Aug. 16, 2015, at Little Guilin, a park in Bukit Gombak.Story coming up.

While the use of bait itself is a controversial subject in bird photography, these men appear to have taken the idea to a entirely new (and inhumane) level. By injecting air into the swim bladder and stuffing bits of Styrofoam into the mouth of a live fish, the men are able to ensure that the fish are stuck floating and flopping on the surface of the water. This both attracts the attention of eagles and provides a target for the photographers to point their telephoto lenses at.

The grey-headed fish eagle is critically endangered in Singapore, reports 10,000 Birds, with only less than 20 breeding individuals left in the wild. This practice puts the eagles at the risk of eating Styrofoam if they do eat the fish, so the photographers were essentially trading the health of a critically endangered bird for photos of it.

Back in September, we published a look at “the dark side of photography”, or what happens when photographers begin to care more about their photos than the wildlife or nature they’re photographing. The video above appears to be yet another case of it.

“This is no longer nature photography and it is nothing that anyone should be proud of,” says 10,000 Birds.

Portraits of Cats Shaking Themselves Clean