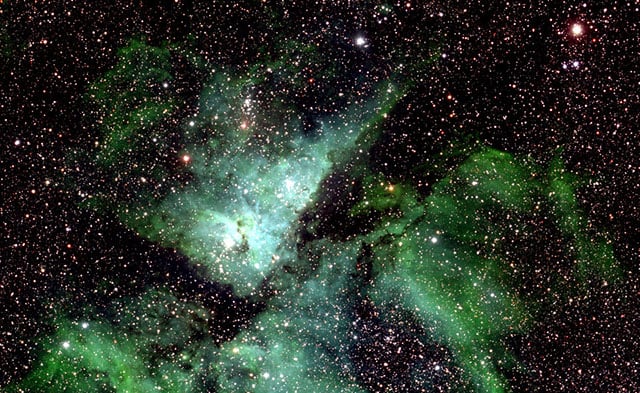 Researchers at Ruhr University Bochum started the project half a decade ago to search for objects in space that change in their brightness over time. After dividing a section of the southern sky into 268 different sections, the scientists spent days creating ultra-high-resolution photos of each one with telescopes at the Cerro Armazones Observatory in Chile.

Once all of the sections had been photographed, the team stitched together those 268 giant photos into an ultra-giant, 46-gigapixel photo that weighs a monstrous 194 gigabytes.

The photo is so big that you’ll need to use the interactive online viewer in order to experience it properly. It looks like a narrow and jagged panorama when you’re zoomed all the way out.

Zoom in, however, and you’ll see that the image contains a ridiculous amount of detail (and number of stars):

The researchers say they have discovered over 50,000 of the variable stars they set out to find using this giant photo. Head on over to the online viewer if you’d like to experience this photo for yourself.

What Do You Do When ISIS Steals Your Photo?