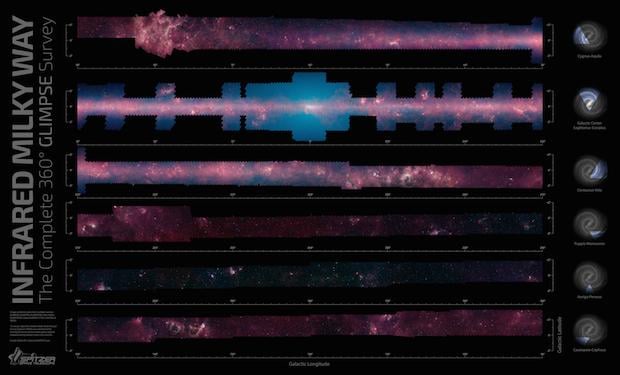 20 gigapixels might not seem like a lot in the world of super-high-res images. After all, we shared a 681 gigapixel image of just the moon’s north pole the other day. But when you’re talking infrared images of the milky way, the 20-gigapixel panorama that NASA just released yesterday is the clearest ever captured, and took them TEN YEARS to shoot.

The zoomable 360-degree mosaic panorama only captures 3% of the night sky, but since it’s the 3% that usually appears front and center in every night sky time-lapse you’ve ever seen, it contains over half of the stars in our galaxy.

Captured by NASA’s Spitzer Space Telescope, the mosaic is made up of over 2 million infrared photos Spitzer has taken over the 10 years it has spent gazing at the heavens.

NASA does a better job of explaining what you’re looking at than we do, so we’ll let them take it from here:

Because the images are taken in infrared, Spitzer is able to see farther than any visible light telescope could, helping scientists to visualize and trace the very shape of the Milky Way we reside in.

But just in case the scientific value of this 360-degree panorama doesn’t interest you, we’ll leave you with a fun fact about the size of this awe-inspiring image: “If we actually printed this out, we’d need a billboard as big as the Rose Bowl Stadium to display it,” said Robert Hurt, an imaging specialist at NASA’s Spitzer Space Science Center. “Instead, we’ve created a digital viewer that anyone, even astronomers, can use.”

To use this viewer and browse the Milky Way for yourself, head over to the Galactic Legacy Mid-Plane Survey Extraordinaire (GLIMPSE) project website by clicking here.

Adobe’s Q1 Numbers Show Creative Cloud Is a Success, Whether We Like it or Not