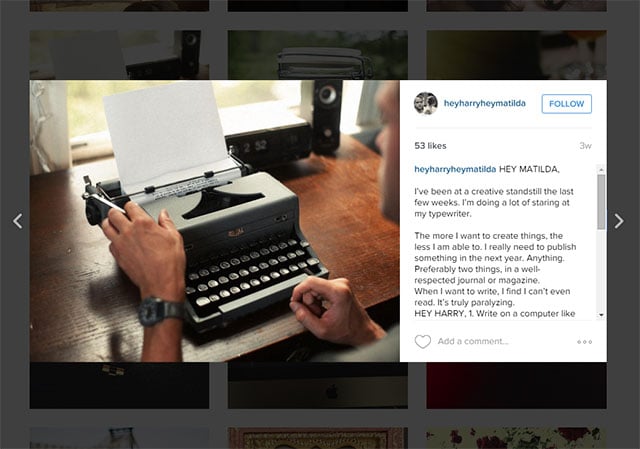 Photographer Rachel Hulin got quite a bit of attention a few years ago for Flying Henry, a series of Photoshopped photos showing Hulin’s son flying through various scenes. Now she’s back again with another creative endeavor.

The story is about a pair of fraternal twins in their 30s named Matilda and Harry. Matilda is a wedding photographer, and Harry is an English professor. Each installment is an email exchange between the two, and through the correspondence (and the photos that appear alongside the text), the story unfolds.

Here are the first few installments that were posted to @heyharryheymatilda (the text is found in the captions of each photo):

Today was kind of a wash. I spent 15 minutes on hold with my bank before I pounded enough 00000000s into the phone to connect me to a real person. I was convinced this fraudulent entity called “SBUX” on my statement was slowly and erroneously taking money out of my account in $4 and $5 dollar increments. I was extremely put out that I had to spend my time dealing with this. I was really outraged. It turns out SBUX is Starbucks. I had to hang up on the customer service lady because she was being smug.

Unrelated: Did you know Pomeranian is an adjective referring to Pomerania, an area divided between Poland and Germany? Maybe that’s why Pomeranians look so much like grandma.

Life is logistics. You’ve got to learn to deal with these daily annoyances, Mat. You’re too hard done by.

I just put 300 Christmas lights (so cheap off season!) on a tree that’s barely three feet high. If I look at it and then look away quickly, little dots swim across my field of vision. It’s pretty excellent. In other news, the lady across the street keeps her blinds about twelve inches raised, so that when she’s just out of the shower and her lights are on, I can see the swath of her upper thigh to her lower abdomen, and her pubic hair is a wild, distracting show. It’s like the classic ’70s pubic hair that you just don’t see anymore.

The Brazilian bikini wax craze has had a really pervasive and detrimental effect on vaginas. This kind of thing is a rare occurrence now.

Needless to say, I’m tremendously visually inspired right now. What’s new with you? (Don’t tell mom about the tree.)
[email protected] Ok, so I had to tag the second post in case you’re too damn lazy to read on. This reminds me of Steve’s greasy mullet in some perverse way. And I like it.

Two resounding thoughts from my weekend.

One: There was a woman in the newspaper saying she doesn’t like French kissing. This has caused problems in her marriage, but she just can’t bring herself to do it. I feel somewhat vindicated by this. But I won’t say I told you so.

Two: I watched basketball for a while on TV and had the realization that fouls are bad, not good! You don’t actually want to make them. That clears up some things for me about seventh grade gym.

That’s all for today— I’m off to grade some disappointing papers.
HEY HARRY,

I don’t remember you telling me you don’t like French kissing, but I’ll let you tacitly tell me so. I just got home and these were the contents of my mailbox, so I made a list. I don’t like what this says about me, it doesn’t seem true. It seems a touch more obnoxious than I imagine myself to be, truthfully.

D. One Economist Magazine (This fellow seems ill-prepared for his cover moment, no? I would have made a flattering picture, Harry. But no one asked me.)

Follow @heyharryheymatilda on Instagram if you’d like to keep up with the story as it unfolds over the next several months. You can also find out more about the novel and project on its website.

Update on 10/21/2015: Author and photographer Philip Anderson Edsel informs us that he wrote a photo-novel on Instagram back in 2014, and his project was featured on the Instagram blog. You can view his novel under the tag #MyInstagramNovel or through his account, @edsel.

Leica SL: A New 24MP Full-Frame Camera to Compete in the Mirrorless War