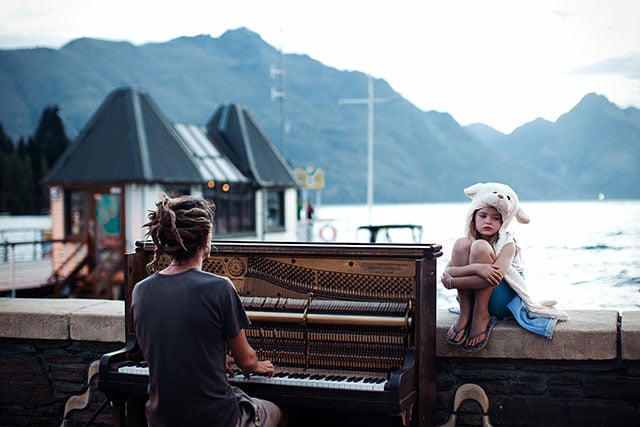 In 2013, my then-girlfriend Martina and I were in Queenstown, New Zealand at the end of a two-month trip. The evening before our journey back home, we went out for a walk, absorbing the magical streets.

At one point in the stroll, my attention was drawn to a busking pianist on the Marine Parade. The music was so amazing, and we lingered for a few minutes just listening to the man play and observing the quiet and melancholy scene (even though we needed to start packing).

I made a couple of photos as well… 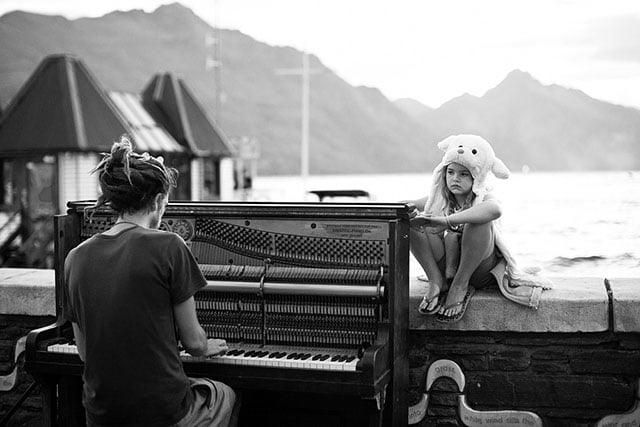 A few minutes later, we left the scene not knowing who the man and the girl were, and only remembering that beautiful and brilliant music. It was one of those moments, the kind that you continue to think about long after they pass.

After we returned home, the chaos of new weddings to shoot meant we didn’t have much time to go through our memories. When we did steal a glance at a photo or two from our trip, that photo captured us again. The only thing missing from the photo was the music we listened to that evening.

“Maybe one day we’ll get a chance to go back,” I told Martina. “And who knows? Maybe that pianist will still be there.”

Not long after that, I received an email notification about National Geographic’s Traveler Photo Contest — one of the most famous and prestigious travel photography contests in existence. Martina convinced me to participate, just for fun, and I submitted four photos — including the one of the pianist and the little girl.

We were in the middle of the wedding season, so we forgot all about the submission and competition.

Then one night, at 2am, we received an email. The subject read “You are the winner!” We froze: that photo we loved had been selected as one of the 10 winning shots from over 15,500 submissions. 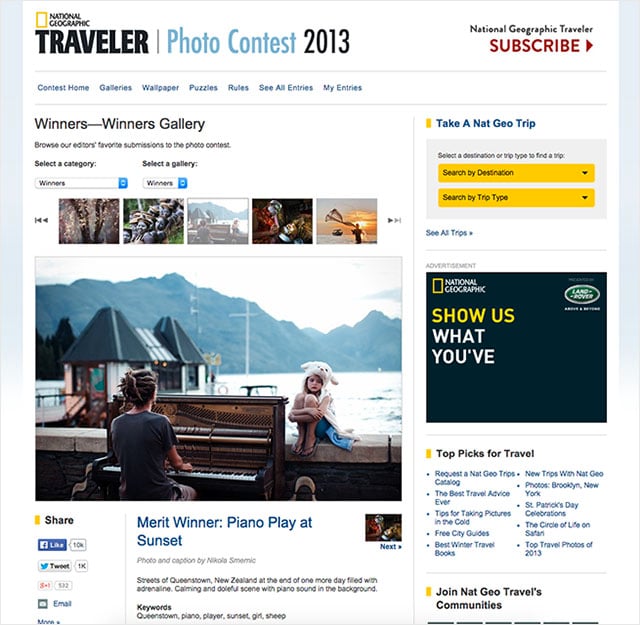 After the competition results were officially published, mayhem ensued. We saw countless articles all over the world about my photo, we were contacted by people all over the world, and we received offers from buyers who wanted to purchase the photo — all the insanity was sparked from that announcement.

But all of that was nothing compared to what happened next.

It turns out my award-winning photo was big news in New Zealand, and a few days later, I received a message on Facebook: 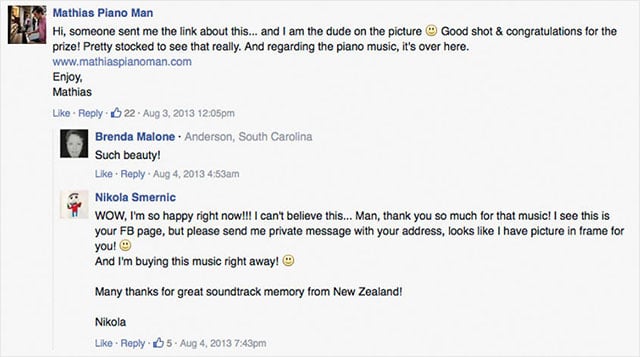 It was our pianist, Mathias Piano Man! It turns out he’s a Belgian man who started traveling in 2008. After arriving in Queenstown, he fell in love and decided to stick around for a while. He found his piano from a recycling center, bought it for $75, put wheels on the bottom, and began to play. A year later, he released his first album. Now Mathias makes a living by selling his albums and playing every day in the same spot in Queenstown.

We ordered his music and began to communicate with him daily. Then, a second email arrived — it was from the mother of a girl named Jemma — the girl in my photo!

It turns out that Jemma was a passerby that evening, just as we were. It was the last day of her family’s trip to Queenstown as well, and she loved Mathias’ music so much that she forced her mom to take her there to listen and buy an album.

This was an incredible experience, and the best story from our trip. A single photo helped connect three people and their stories. We sent two framed pictures to both Mathias and Jemma. 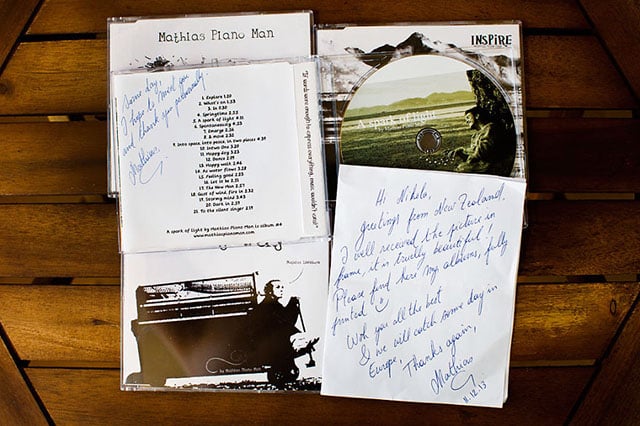 The story doesn’t end there… We licensed Mathias’ music for our wedding, and it just so happened that Mathias was visiting his family in Belgium, so he decided to attend our wedding ceremony in Croatia to play his music live. 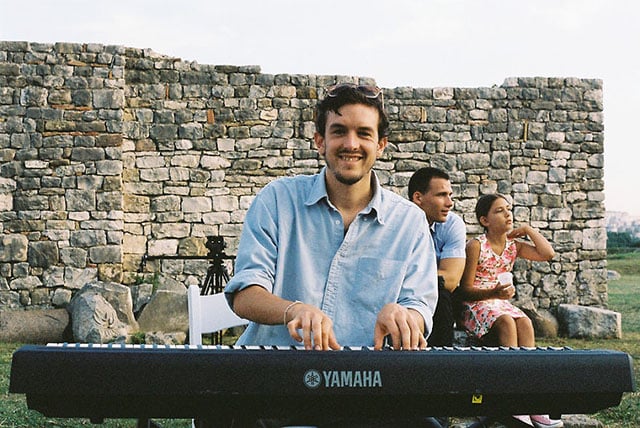 Thanks to a special photo and a huge award, we made two amazing friends and have connected with them in a very special way. That’s the greatest thing about traveling, and this story is something we’ll carry with us for the rest of our lives.

P.S. You can see our wedding slideshows with Mathias’ beautiful music here. If you’d like to help us get back to New Zealand, you can purchase a limited edition print of my award-winning photo here.

About the author: Nikola Smernic is an award-winning wedding photographer based in Croatia. He won the National Geographic Traveler Photo Contest in 2013. He and his wife Martina were married in July 2014. You can find more of his work and writing on his website and blog.

Inside the Camera Bag of Portrait Photographer Peter Hurley