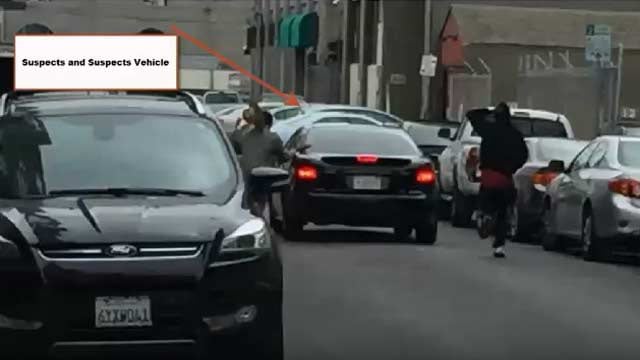 In the San Francisco Bay Area, pricey camera equipment is becoming one of the favorite targets of robbers. In 2013, the New York Times reported that photojournalists in Oakland were becoming the victims of camera robberies. Last month, photographers were robbed in broad daylight by assailants wielding pepper spray.

The San Francisco Police Department is now asking for the public’s help in solving yet another DSLR robbery that occurred in the city last month.


Police say that a newspaper photojournalist was walking on Bryant Street at 11am on July 23rd with a second person when two suspects pushed him over from behind. As he fell over, they grabbed the “Canon 1D” DSLR camera (we’re guessing it was a $4,600 Canon 1D X) and lenses he had — a kit worth more than $9,300.

The photographer struggled to hold onto his gear, and was dragged about 20 feet by the suspects before they wrestled it free and ran off with it. Surveillance cameras in the area captured the suspects driving away in a black Pontiac Grand Prix, as well as a possible “Good Samaritan” chasing the car in a pickup truck:

Out of other possible leads, the police department is now hoping that someone will have information about the suspects after seeing this surveillance imagery. Contact the SFPD if you do.

(via SFPD via KRON4)