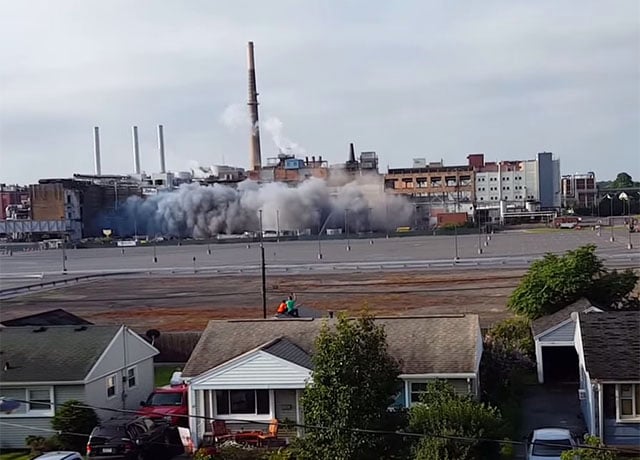 Yesterday marked the end of another piece of Kodak’s once-powerful film manufacturing business. The company used 100 pounds of dynamite to take down the 92-year-old Building 53 at Eastman Business Park in Rochester, New York. The sprawling 250,000-square-foot plant, once used to manufacture acetate base for camera film, was reduced to 1,500 tons of steel and concrete in less than 20 seconds.

A number of spectators gathered at the park to witness the demolition. Here’s what YouTube user dransgp saw:

Since 2003, Kodak has spent $200 million in demolishing around 45 buildings. The industrial complex is being redesigned to allow other companies to move in share it with Kodak.

At the peak of Kodak’s reign during the days of film photography, more than 50,000 employees worked out of Eastman Business Park, but that number has since dwindled to around 1,000. A second plant in the business park is still operational and will still be churning out acetate film base for Kodak.

A Brief History of the Canon Canonet Rangefinder