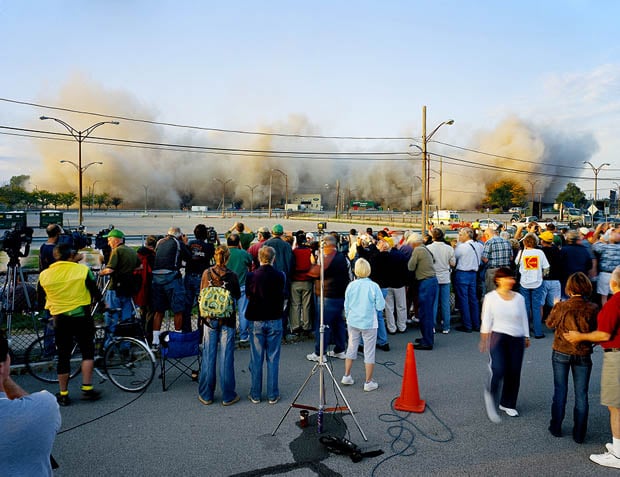 Since 2005, photographer and photography lecturer Robert Burley has been documenting the demise of film photography through film photographs. He has traveled around the world with his 4×5 field camera in tow, capturing the demolition of buildings, the equipment that once powered a giant industry, and the desolation of factories that were once teeming with workers.

The photograph above shows a crowd watching the implosions of buildings 65 and 69 at Kodak Park in Rochester, New York on October 6, 2007.

On a gray December morning in 2007, crowds gathered to watch the death of photography in its birthplace. Photography refused to go quietly. After the demolition team had set off the 950 kilograms of explosives placed at the base of the building, only a portion of the structure came down. An embarrassed group of Kodak executives were forced to schedule a second attempt in February of 2008, which successfully ended the company’s presence in Niépce’s city.

To be in attendance at [the demolition of Buildings 65 and 69] was to experience something thrilling and disheartening at once. The thrill came from the deafening explosions and the unreal collapse, only taking seconds, of an enormous and cavernous building. This was invariably followed by an eerie silence; spectators, many of whom were former employees and had spent the better part of their lives working in these buildings, quietly got into their cars and went home. In each instance, I believe, I was one of the few photographers recording the event on film. When I looked into the crowds in front of my view camera, I saw an array of digital devices—cell phones, camcorders, and cameras—capturing a final “Kodak moment.”

Although some photographic films and papers could be handled in subdued (“safe”) light, most films were manufactured, cut, and packaged in absolute darkness. For this reason, many of the buildings were filled with darkened, black-painted rooms, often thousands of square feet in size, to meet the needs of large-scale production. The building interiors were divided into a complex series of hallways and entrance and exit passages to accommodate the traffic of workers who had developed an equally complex system for working in, and finding their way through these dark areas without incident. While the Kodak Company had a long history of employing blind workers who were at ease in the pitch dark, most others whistled or called “Watch out !” to their peers as they made their way to their workstations.

The Waltham facility was closed in 2008 when Polaroid, after its second bankruptcy in ten years, announced that it would discontinue the production of all its instant films. Once having employed more than 15,000 people in Massachusetts, the Polaroid Corporation was reduced to a workforce of 1,500 by 2010, offering a variety of digital products, including camcorders, DVD players, and LCD screens. In 2011, it announced the production of a digital version of its instant camera.

The economy of scale required in the manufacture of photographic film only becomes evident when confronted by the spaces in which the product is made or stored. The small rolls that photographers use (or used) in their cameras start out as enormous master rolls manufactured to high standards in a very few specialized facilities around the world. These rolls are some 54 inches wide by as much as 2 miles long. A typical master roll will produce approximately 50,000 rolls of 35mm film, or over forty hours of 35mm motion picture film. This Agfa warehouse contains an estimated 1, 500 master rolls of film — enough to make 73, 500,000 rolls of 24-exposure 35mm film.

This month, Burley published 71 of large-format photographs as a hardcover book titled “The Disappearance of Darkness: Photography at the End of the Analog Era“:

You can read more about this project over on its official website.

The Disappearance of Darkness (via CNN)

Update: Pete Brook over at Wired’s Raw File also has a great profile on this project.

Image credits: Photographs by Robert Burley and used with permission