A viral GoPro video is taking the Web by storm, and this one has nothing to do with extreme sports. Instead, it shows the miracle of life. The 4-minute video above captures an entire childbirth in the passenger seat of a car while the mother is being rushed to the hospital. (Note: there’s no nudity, but this is a video of childbirth).

New York Daily News reports that Jon and Lesia Pettijohn were rushing to the Bay Area Birthing Center in Pasadena, Texas, when Lesia’s water broke when they were 10 minutes away.

Jon started shooting video of Lesia with a GoPro camera resting on his leg, and it’s a good thing he did: their 10-pound-baby boy was born just two minutes later, and the amazing birth was all captured on camera while Jon kept driving. 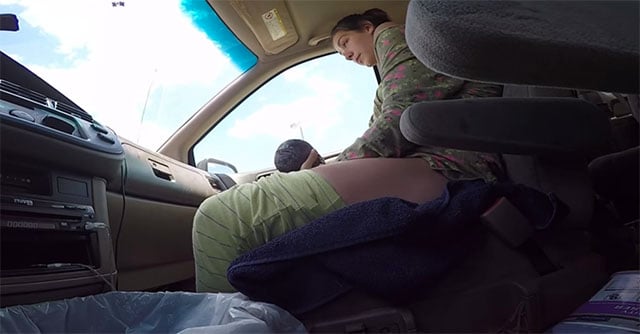 Jon, Lesia, and their new son, Josiah, are now doing fine, and the family’s video has racked up over 5.5 million views on YouTube in just three days.

Beme Wants to Kill Selfies and Self-Consciousness in Social Sharing