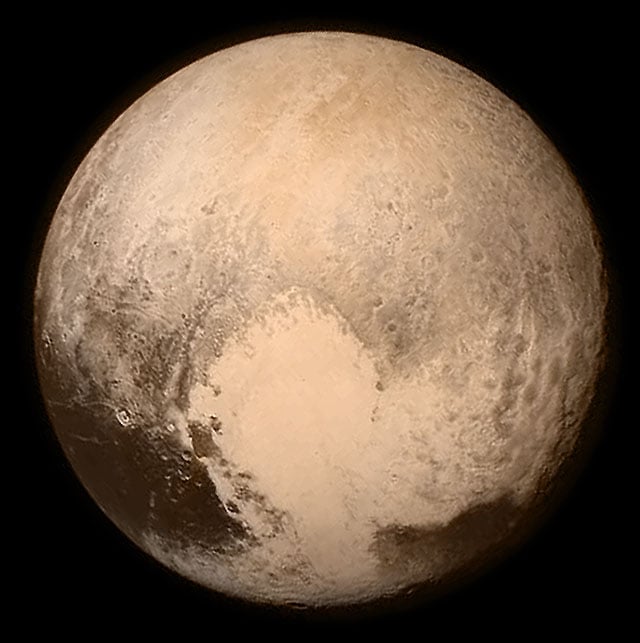 The photo was captured at 4PM EDT yesterday, about 16 hours before the moment of closest approach today, when New Horizons was 476,000 miles away from Pluto. During the flyby today, the spacecraft whizzed by Pluto at just 7,750 miles away — about the distance from New York to Mumbai, India.

Pluto sent a love note back to Earth via @NASANewHorizons. This is the last image taken before today's #PlutoFlyby. pic.twitter.com/a2AE20LHcR

There are two cameras onboard New Horizons: the black-and-white Long Range Reconnaissance Imager (LORRI) for telephoto photos at 1024×1024 with a CCD sensor, and the color Ralph telescope. Colors from Ralph photos can be used to colorize high-res images captured by LORRI.

New Horizons is currently in quiet data gathering mode; once it reestablishes contact, it will take 16 months for the probe to send back its 10 years’ worth of data back to Earth.

NASA will be sharing many more photographs of Pluto in the coming days, including the first true high-resolution mosaic photo captured during the historic flyby. Stay tuned.

Practical Pointers for Getting Your Photos Noticed on Flickr and 500px