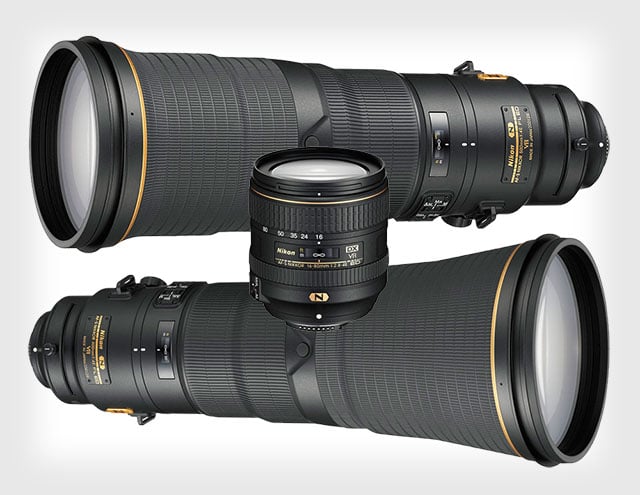 Nikon today announced three new lenses: a 16-80mm f/2.8-4 for DX cameras, a 500mm f/4 for FX, and a 600mm f/4 for FX. The 16-80mm brings Nano Crystal Coating and Electromagnetic Diaphragm to DX lenses, while the 500mm and 600mm use fluorite elements for significant weight savings. The new 16-80mm f/2.8-4E is a DX lens that offers the equivalent focal range of 24-120mm in 35mm terms, so it’s a flexible walk-around lens that’s a jack-of-all-trades for enthusiast photographers.

Specs include a minimum focusing distance of 1.2 feet, 4-stop vibration reduction, fluorine coating on the front and rear elements, 17 elements in 13 groups, a 7-blade aperture, and Silent Wave Motor (SWM) technology for fast and accurate autofocusing.

Nikon says the lenses are designed for sports, action, wildlife, and press photographers. “By the fourth quarter or final period, users will sincerely appreciate the weight reduction of these lenses which allow for extended shooting, even into overtime,” the company writes.

How Much Does a Scratch Affect the Quality of a Lens?

‘Electric Universe’: A Light Painting Photo Straight Out of a Film Camera