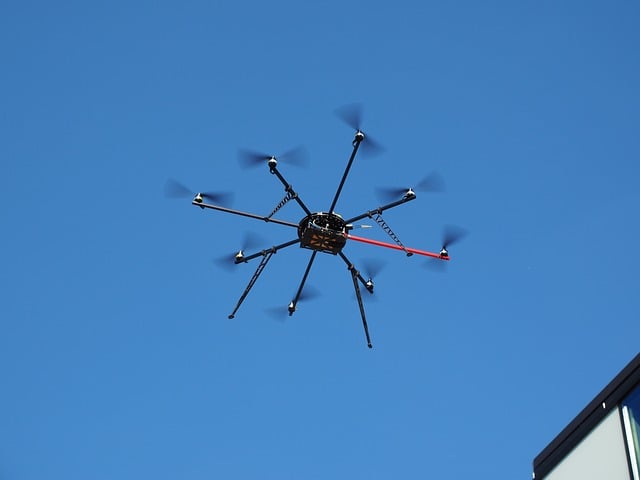 There have been multiple stories of drones getting shot out of the sky with shotguns in the past couple of years. Last November, we reported that a New Jersey man was arrested after shooting down a camera drone that was taking pictures over his property.

Now another drone pilot, Eric Joe, has just won a lawsuit against a disgruntled neighbor who blasted Joe’s hexacopter out of the sky with a shotgun.

VICE reports that a judge has ordered that Brett McBay cough up $850 for Joe’s custom-built drone. McBay originally had to pay $2,500 bail after being charged with possession of a weapon for unlawful purpose and criminal mischief.

Joe notes that he initially tried to settle the issue outside of court, but it did not work out. The emails below showcases Joe attempting to resolve the matter civilly via email with McBay: 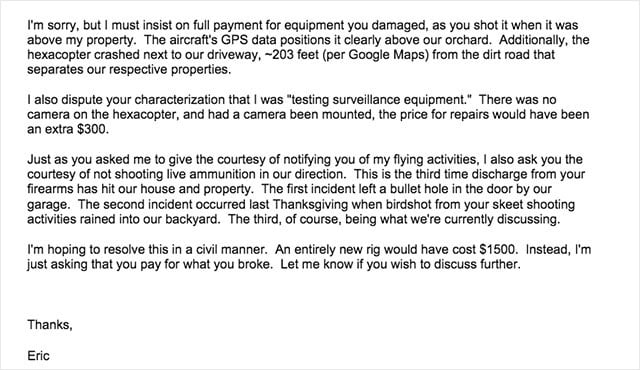 The official decree of the case noted that the “court finds that Mr. McBay acted unreasonably in having his son shoot the drone down regardless of whether it was over his property or not” and that “Judgement will enter for Eric Joe and against Brett McBay for the sum of $700 plus costs of $150.” According to the judge, “it was more or less an open-and-shut case” since McBay acknowledged shooting down the drone via email.

At this time, the Federal Aviation Administration (FAA) has classified drones as ‘aircrafts’ meaning that shooting at one is technically a violation of federal law and can carry a sentence of up to 20 years in prison. While no one has been charged that severely at this time, the FAA has made it clear that shooting down a drone is illegal. A criminal case is still pending against McBay at this time.

Eric Joe vs. McBay may not be a case you hear about in future history books, but it is an important one that sends a clear message about drone usage and that, just like a plane, they cannot be shot down whether they are or aren’t over your property. For those wondering what McBay’s defense was: he simply noted that “he wanted peace and quiet in his neighborhood.”