In what is either a crazy accident or a brilliant attempt at a bit of viral marketing, this video shows 8-year-old Ruby Kavanagh, a world-class junior golfer, knocking a $1,900 drone out of the sky with a well-placed drive.

On the face of it, the video is straight forward: practice swing from the number 1 ranked child golfer in Australia hits Yuneec Typhoon H hexacopter, dislodging a landing gear strut and sending the drone careening off into the grass never to fly again. But the video has earned itself more than a few critics.

All blades are intact and spinning after the ball hits, so why did the hexacopter fall? Why did it hover there for a second or two before flying off to the side? And why is the footage from a 4K-capable drone so grainy? 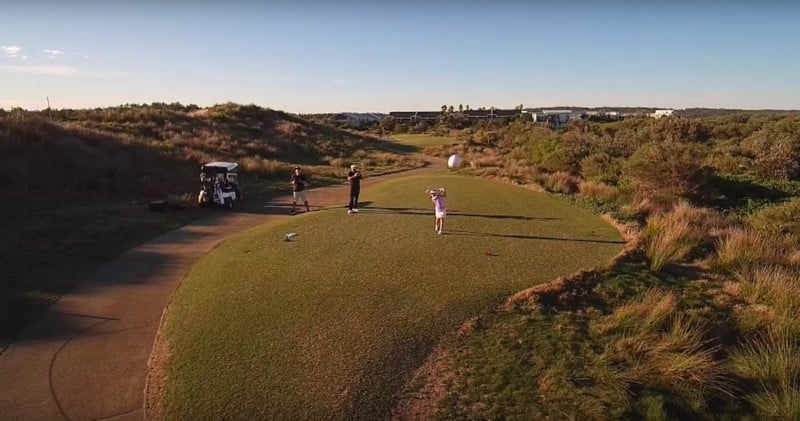 The online “jury” seems split on whether or not the video is staged, but we’ll give Ruby the benefit of the doubt on this one. If nothing else, it proves she’s got a killer swing.

And even if it is a staged attempt to make the junior golfer go viral and bolster her GoFundMe campaign, it seems to have only served half its purpose. In 4 days, the YouTube video has over 250,000 views, but the crowdfunding campaign is still hovering at just over $3,000.

In fact, the only public donation since the video went up 4 days ago was for $20; hardly the kind of ROI for which you’d sacrifice a $1,900 drone. Although she does now get to put “drone killer” on her Instagram profile… so there’s that.

This Camera Store is Using Adorable Animals to Make Your G.A.S. Worse

Abstract Photos of Oil Spills that Look Like Iridescent Eyes