With Sony dominating the mirrorless camera market, other companies are looking to find ways to make their hardware stand out in comparison. Fujifilm has chosen to design their custom sensor array, Panasonic has focused on stunning video, and Samsung – well, they want to cram as much technology into a small package as they possibly can. The result is the NX500; and it is a real tiny camera with big promises. 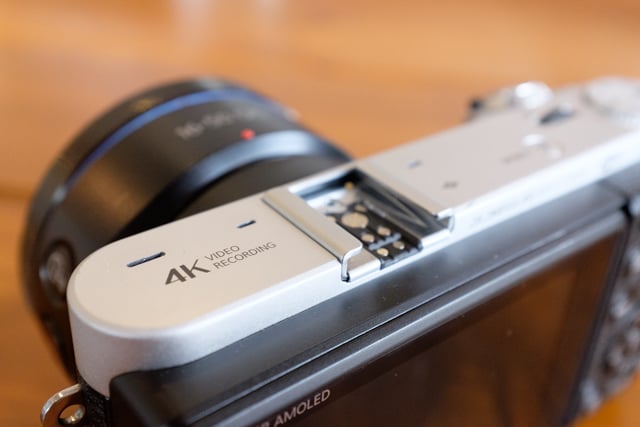 The Samsung NX500 is a mirrorless interchangeable lens camera with a 28.2 MP APC-S CMOS sized sensor, which is currently the highest resolution APC-S sensor on the market. The NX500 touts what Samsung is calling the world’s first backside illumination technology, allowing more light to reach the sensor for lower noise performance and improved image detail. On the rear end of the setup is the company’s latest DRIMe Vs image processor that can capture full 4K video clips without the aid of an external unit. 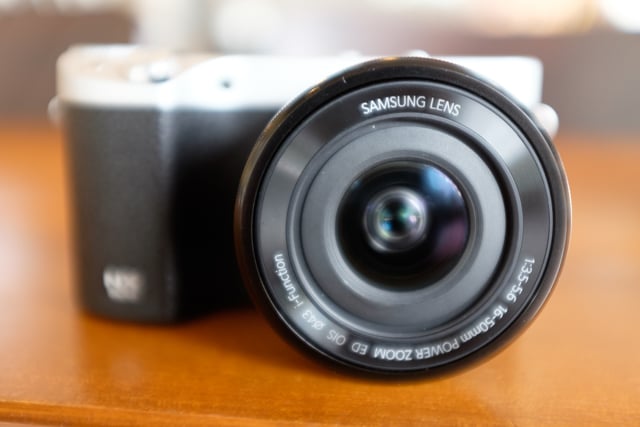 While unboxing the camera, we were quickly amazed at how small and light weight the unit felt. The Samsung NX500 weighs in at 0.63 lbs and boasts dimensions of 4.7” x 2.5” x 1.7”. The unit measures slightly smaller than the popular Sony a6000. With a metal frame and three possible color options – black, brown, and white – the NX500 is quite attractive. Due to its size, we even dare to call it ‘cute’, but don’t let that cuteness fool you. 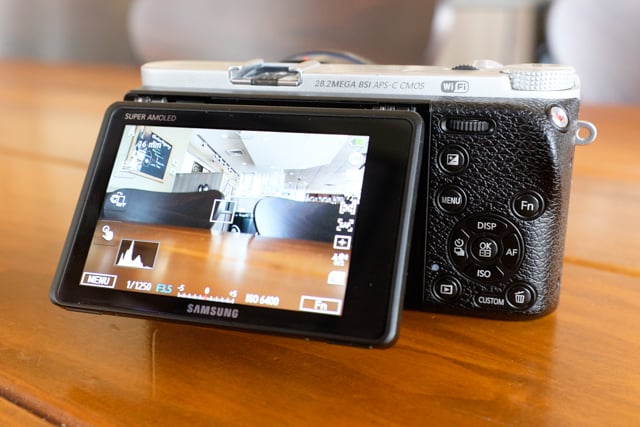 As we mentioned before, the NX500 boasts a powerful 28.2 MP APC-S CMOS sensor for some serious shooting. Instead of an electronic viewfinder, there is a beautiful 3” Super AMOLED touch screen on the back. The screen has a resolution of 1036k dots and allows adjustments so that the naturally vibrant colors of AMOLED screens are more representative of your final product. 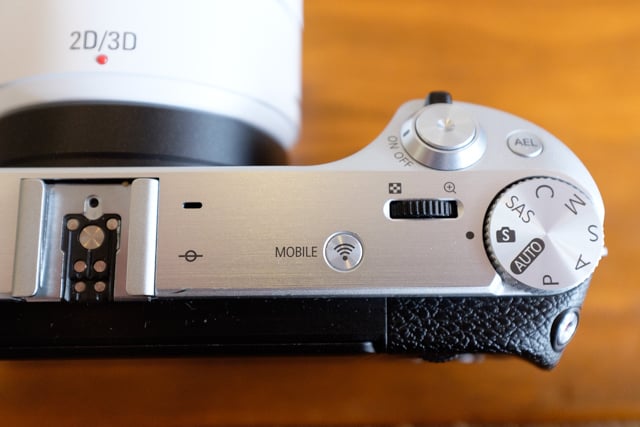 The first thing we do when picking up a new camera is to look over the entire body to learn what each and every button does – who needs manuals, right? The sides and bottom of the device are free of clutter with the exception of two doors; the left side houses micro-USB and mini-HDMI ports, while the bottom houses the unit’s battery and SD card slot. The front of the NX500 is also quite clean, except for a small lens release button. 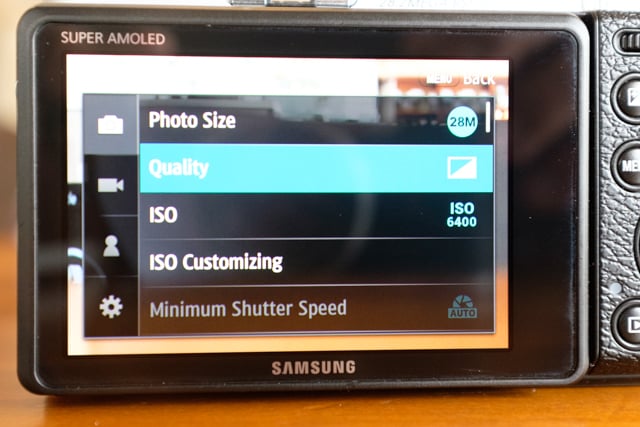 The back and top of the unit is where you will find most of your controls. The top features space for a standard hot shoe as well as the on/off switch, AEL button, PASM dial, WiFi button, and primary command dial. The back of the unit is mainly taken up by the camera’s beautiful AMOLED touch screen, but also houses some buttons and dials. From the top-down you will find the sub-command dial, along with the exposure compensation, menu, Fn, display, autofocus, ISO, shooting mode, play, and erase buttons. My hands are decently large but felt comfortable on the small unit. The buttons had a nice click to them and the dials scrolled consistently. We do wish that the dials were made a bit larger for a more tactile shooting experience, but they are still quite suitable. 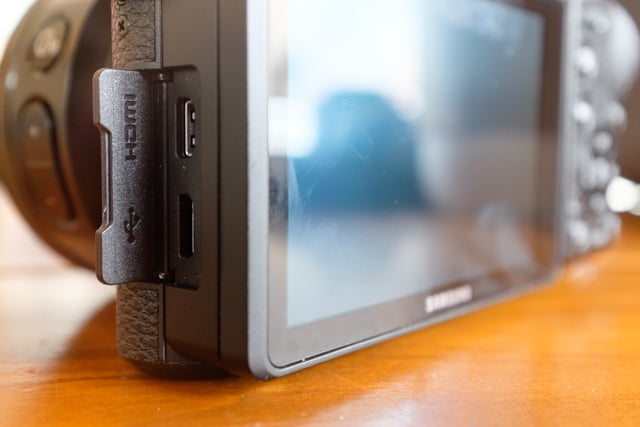 Lastly, you will find one of the camera’s main buttons on the lens itself. Samsung places an ‘iFn’ button on all of their lens units that brings up an interactive shooting menu system. You will have access to this function no matter what Samsung brand lens you use. Unfortunately, third party manufacturers are left to their own pursuits with this feature. Despite the additional iFn feature on the lens, we found the regular ‘Fn’ button on the back to bring up a similar menu that was much easier to navigate. 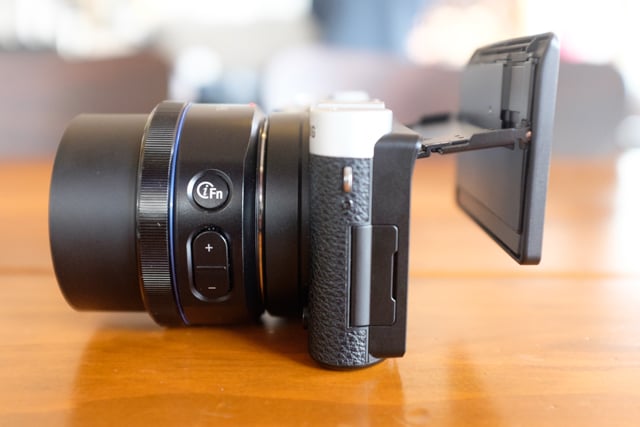 Samsung touts the system’s autofocus system, calling it “the perfect combo of speed and accuracy.” In our testing, we were a bit disappointed by the results. The NX500 did lock onto items relatively quickly but hunted around at times for the perfect lock. In comparison to Sony’s a6000 or Fujifilm’s X100t, it felt quite slow to operate. 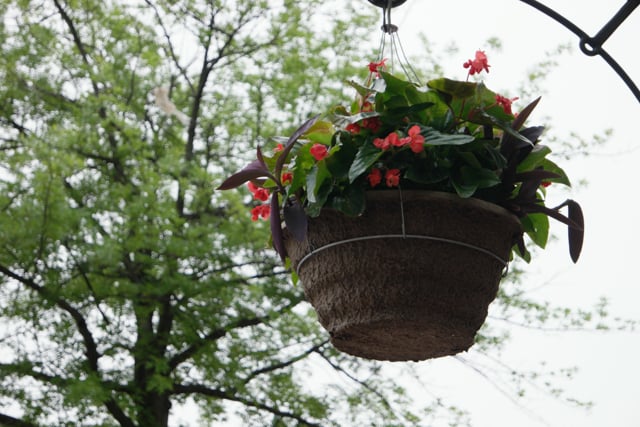 The NX500 metering system was also something that we had both positive and negative feelings about when testing. The system tended to favor shadows when shooting in scenes requiring high dynamic ranges. For example, when shooting a dark image against a bright background, most cameras will find a happy medium. However, the NX500 seemed to want to prevent overexposure at all costs, causing parts of the image to become underexposed. The unit’s built-in HDR mode was helpful but we don’t want to have to fire three shots every time we want a single photo. 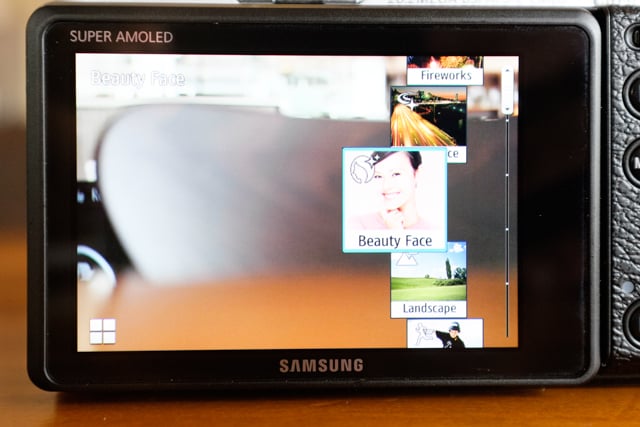 The unit had the standard modes you would expect – auto, program, aperture priority, shutter priority, and manual – along with Samsung Auto Shot, Smart Mode, and Custom. The Smart mode just acts as the ‘scene mode’ dial you would find on many other camera systems, allowing you to capture easy portraits, landscapes, fireworks, etc. The Samsung Auto Shot button was quite interesting on the other hand; it allows easy photography of sports, where the shutter will automatically fire when it detects motion. 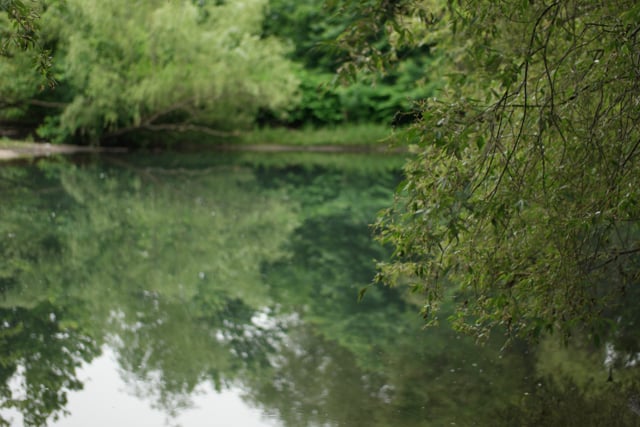 Those of you looking to shoot sports with the NX500 will have the Samsung Auto Shot mode along with continuous nine fps shooting to capture the moment. We can’t recommend the NX500 as the ultimate budget sports camera, but it does a decent job and will deliver gigantic 6480x 4320 RAW files for editing. 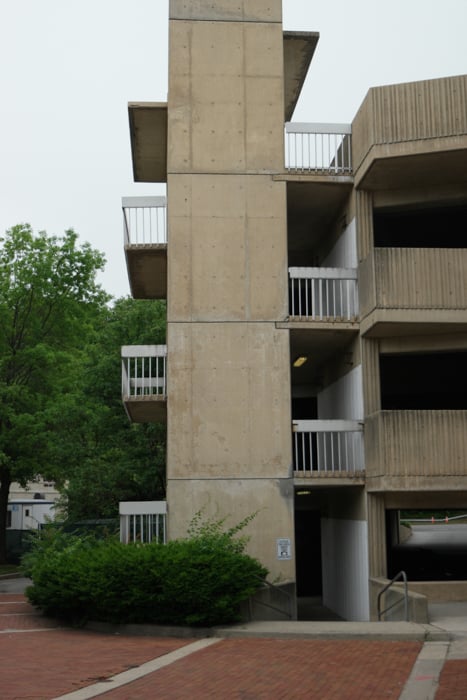 When interacting with the unit, you can choose to either use the command dials and buttons or opt for the touchscreen controls. We would recommend using the hard physical buttons and dials, as the touch screen’s interface was small and difficult to interact with at times. We did appreciate the handiness of the tilt and flip aspect of the screen when shooting around town. 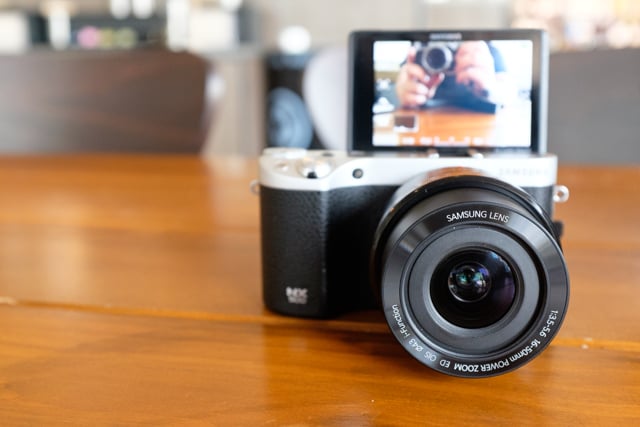 I’m now going to admit something that will kill half of my self-worth in the photography community. I was obsessed with the unit’s selfie mode capabilities. Flipping the screen up allows you to easily take self-portraits with software processed skin smoothing. Also, you can trigger the shutter by either smiling or blinking your eye. Overall, if you are into pictures of yourself, this might just be your favorite camera. 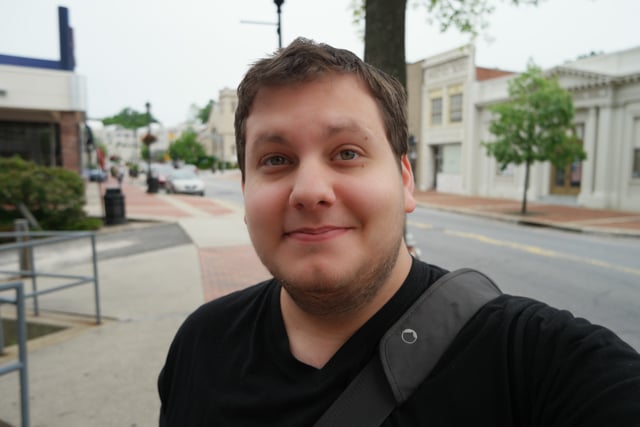 We briefly tested out the NX500’s 4k video capabilities and it is quite impressive – Panasonic and Sony should really keep their eyes focused on the competition. The codec the files used by default are a bit of a challenge to work with, and it took us a tad bit of time to find a converter that could make it more manageable to work with (it uses the new H.265 compression codec instead of the popular H.264 codec).

One major downside to the unit, that prevents any professional capacity, is the lack of a microphone input, so you are left with only the internal stereo mics for recording sound.

Other notable features of the unit include optical stabilization capabilities, smart filters for vignetting, miniature, water, and selective color effects, and the integrated Wi-Fi and Bluetooth capabilities. With the push of a button, you can quickly select ‘MobileLink’ to select and browse photos from your smartphone, ‘Remote Viewfinder’ to remotely capture images, and ‘Quick Transfer’ to easily share a photograph to your device. In regards to the lens we tested with, we used the camera’s bundled 16-50mm f/3.5-5.6 Power Zoom ED OIS lens. The lens itself has a very plastic feel to it but does have a metal mount. For basic shooting, the lens will work just fine, but we felt the raw imagery from the glass lacked contrast. One of our favorite features of the power zoom lens was the ability to either change the focal distance via the standard zoom ring or via two lens mounted plus and minus buttons. 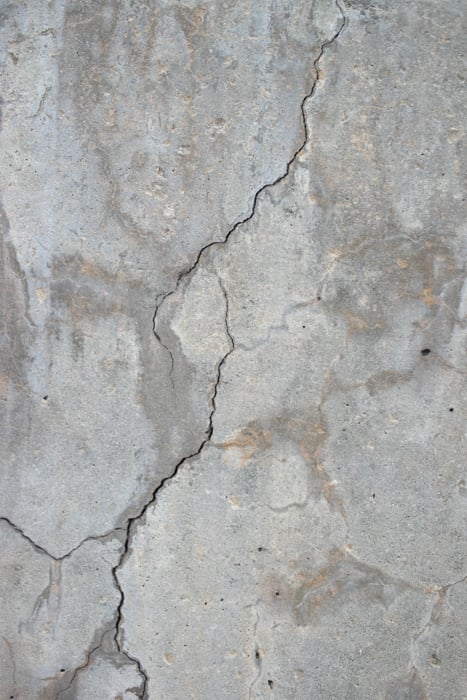 When taking a look at the sensor’s ISO capabilities, the noise is unnoticeable in low light situations up to ISO 800. Between ISO 800 and ISO 3200 are perfectly usable shots while ISO 6400 begins to get a bit noisy. We would advise avoiding ISO 12800 and ISO 25600 unless you really need to utilize it in tough situations. To see our complete collection of sample images, be sure to head over to the PetaPixel Flickr.

Overall, the Samsung NX500 is a beautiful camera that we believe is targeted at a very particular market – those looking to take social photographs and share them with friends. If social media had a best friend, it would be the NX500. 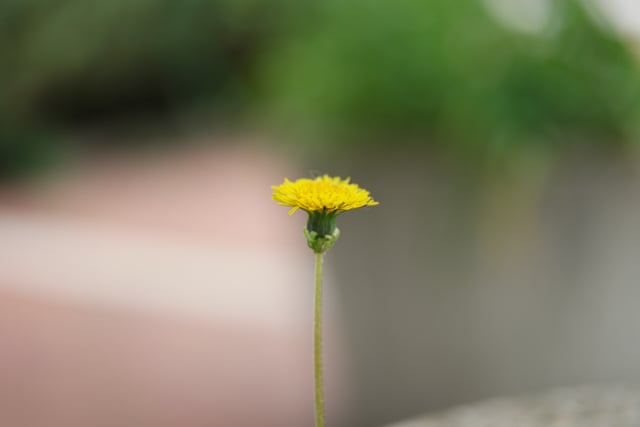 While the unit has a robust sensor and image processor, we believe that individuals looking to simply take their home photography to the next level will be the best suitors. Once Samsung improves the unit’s internal software for metering and autofocusing, we believe it will be easier to recommend for more professional style shooting. 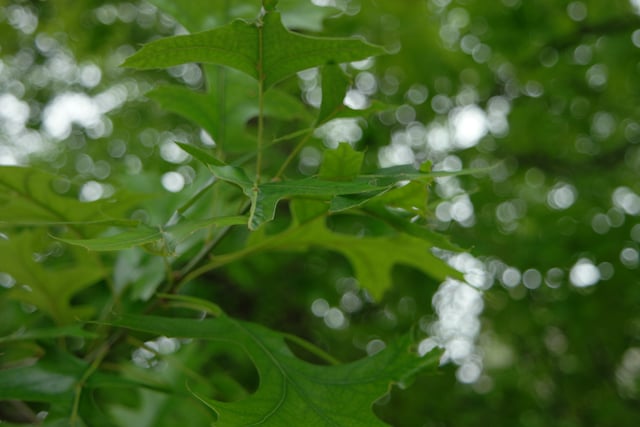 The NX500 represents an incredible combination of technology packed into an ultra small form-factor. We hope to see Samsung continue to push forward in the market, as they have become the standard for innovative software – it just needs a few tweaks.

Editor’s Note: A previous version of this article showcased ISO photo samples with Samsung’s ‘Smart Range’ enabled. Due to concern, we have retaken the photographs with ‘Smart Range’ set to the off setting. Our recommendations for ISO performance remain the same.

Photographer Joey L. Turns His Lens on the Guerrilla Fighters of Kurdistan