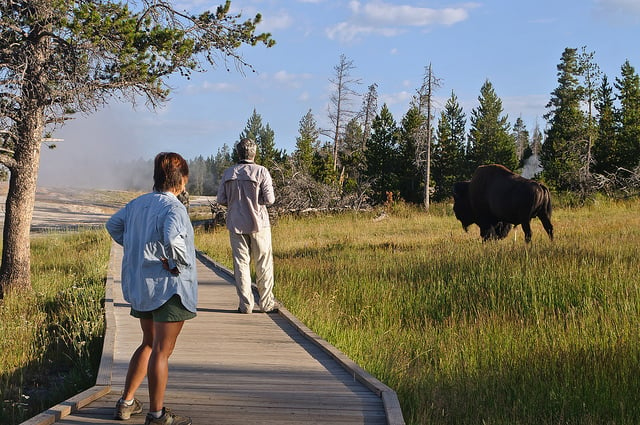 It seems people still aren’t learning to keep their distance from wild animals when shooting tourist snapshots. A man was attacked and seriously injured by a bison in Yellowstone National Park yesterday after he tried to take photos of it with his iPad from just 3 to 5 feet away.


A Yellowstone spokesperson says that the bison was lying the grass near a paved walkway near the famous Old Faithful Geyser. Several people surrounded the bison, and then man decided to step forward and shoot some up-close photos.

The Associated Press reports that the 62-year-old Australian was tossed several times into the air by the animal.

The National Park service recommends that people stay at least 25 yards away from bison, as they can weigh as much as a small car and run three times faster than humans. Bison and elk may seem friendly compared to bears and wolves, but they’re actually responsible for more attacks and injuries in Yellowstone than the latter.

In case you’re not convinced at how dangerous bison can be, here are a few eye-opening videos showing bisons charging people in Yellowstone:

This latest incident was actually the second photo-related bison attack in Yellowstone in the past month. Back on May 16th, a 16-year-old Taiwanese girl was gored by a bison after she tried to pose for a photo with it.