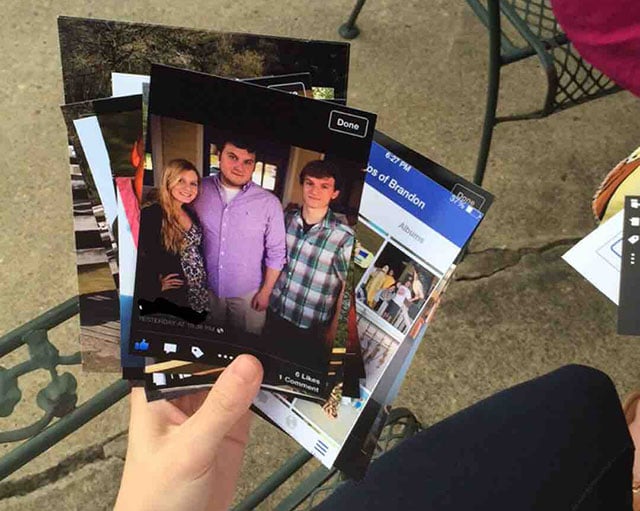 Here’s an interesting side effect of Facebook’s popularity in photo sharing: printed Facebook photo screenshots. Reddit user OutbackBrah was recently taking a look at some photos his aunt printed at Walmart and was surprised to find that they were screenshots taken inside Facebook’s mobile app.

Apparently this is something that’s very common these days — some people just know how to screenshot but don’t know how to save a photo itself. Quite a few Reddit users who work at major photo printing services left comments in the post about how often they see customer photos just like this.

“I work photo desk at a Walgreens, this happens quite often,” says one. Another: “Worked at a Walmart photo center for a while, its a constant thing.”

“I work at a photo department at a big box store like WalMart. you have no clue how many people do that,” writes a third commenter.

Just think: people generations from now will be flipping through their historical photo albums and will be noting how these images show an artifact of how photos were shared early in the millennium.

P.S. If you have a loved one who prints their smartphone pictures in this manner, just tell them that they can save the actual photo instead of a screenshot by tapping and holding the photo on their phone. Voila!

Image credits: Photograph by OutbackBrah and used with permission